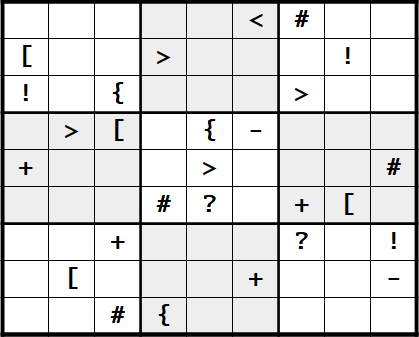 This is a Sudoku that is also a Brainfuck program.

The standard rules of Sudoku apply. The same symbol can not appear twice in the same row, column, or 3x3 box.

The grid should also form a functioning Brainfuck program. There are two requirements, the program must halt, and it must produce the correct output. Here is an online interpreter for testing.

The program should, when given the input "BrainFuck", output "Crÿinl".

For visibility, the period are replaced with an exclamation mark, and a comma with a question mark.

Also, brackets cannot be balanced by the constraints of sudoku, so I am using the symbols [{. Whichever one appears first on a line is treated as an open bracket, and the second one is treated as a closing bracket.

# is not a valid command, so it is a no-op and does nothing.

Brainfuck operates on an infinite* array of memory cells, each initially set to zero. There is a pointer, initially pointing to the first memory cell. The commands are:

grid-deduction computer-puzzle sudoku
Share
Improve this question
edited May 7 at 1:57

I believe this is the solution (apologies in advance, not sure how best to format this):

Edited to include explanation of how I arrived at the solution:

I first ignored the brainfuck aspect of the puzzle and just tried solving it like a normal sudoku. I got to a certain point where the grid was probably about halfway full and I couldn't progress any further with normal deduction.

From there I looked at the candidates for the top row. I unfortunately didn't save the exact state it was in at that point, but basically IIRC the first three squares in the top row were some combination of >, + and ?. Permuting those and thinking through what the brainfuck output would be, I guessed that these would be ? (input the B), + (increment B to C), and > (move pointer to the right).

With those guesses in place I was able to fill in another bunch of cells using standard Sudoku logic. In particular at that point I believe the entire second row was filled in, and reading the brainfuck allowed me to fill in the rest of the top row to complete the first two lines of code that would produce the required output. At that point I was able to finish the rest of the puzzle like a normal Sudoku, and confirmed in the provided interpreter that the resulting code worked as required.

Not the answer you're looking for? Browse other questions tagged grid-deduction computer-puzzle sudoku or ask your own question.

78
Empty sudoku puzzle
15
Tetromino Sudoku
7
Solve this Subtraction sudoku!
10
Another Colombian Sudoku
10
Knights of the Square Sudoku Table
5
All That Remains Sudoku
4
Smudged Sudoku - help me solve it!
4
How to test a sudoku solver?
21
Square Number Sudoku
11
An experimental sudoku