The fugitive is at the origin. He moves at a speed of 100. You have a guard at every integer coordinate except the origin. A guard's speed is 1. The fugitive and your guards move simultaneously and continuously. If he's within 1/100 distance from a guard, the fugitive is caught and you win the game. 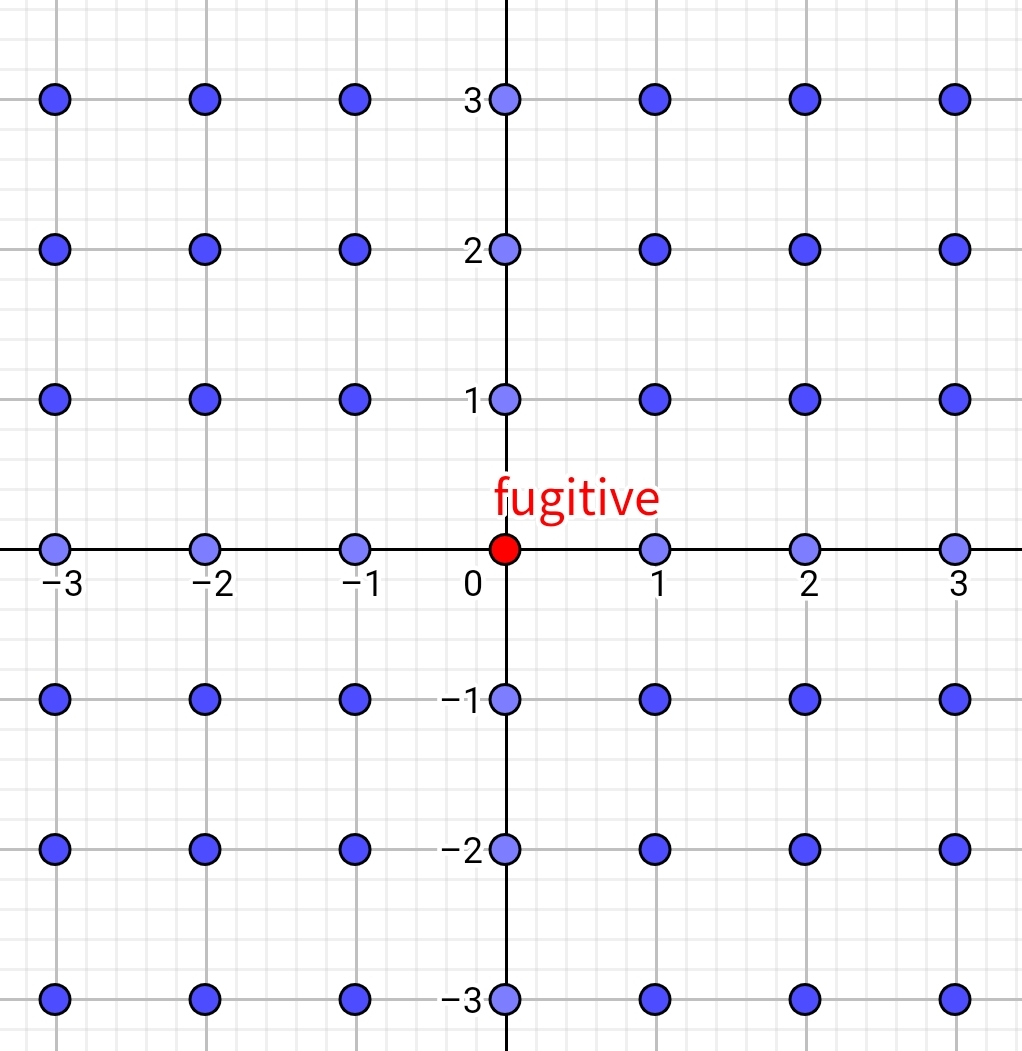 What's your strategy for catching the fugitive in the shortest amount of time?

Needless to say, you need to control your guards' movement strategically in order to catch the fugitive at all.

A heuristic argument to see which ball park we'll likely be talking about:

To make a tight wall we need 50 guards per unit length, so if we recruit opportunistically we'll deplete a +/- 25 strip around the prospective wall with the farthest away cops arriving after 25 seconds.

The fugitive can travel 2,500 units in that time, so we can reliably and without any micro management trap them by setting up a perimeter of roughly that radius.

If we do only that and not use the cops that are also trapped within the perimeter we need another 2,500 seconds to collapse the perimeter into the centre.

But we can clearly do much better by setting up additional concentric rings at roughly 50 units distance (limited by available cops). After 25 seconds the fugitive will be trapped between two rings and have to surrender after another 50 seconds.

We can probably further improve the second phase by packing the rings a bit denser (at modest cost during phase one) such that the inner ring can expand.

Can we do much better?

Unlikely, as the fugitive can safely pass anywhere the local density is appreciably below 50. It may be possible to reduce the 2,500 radius a bit by micro management but certainly not by a large factor.

Not the answer you're looking for? Browse other questions tagged mathematics geometry strategy optimization game or ask your own question.

1
The Security To The Party (Part 19: Oh God Another One)
70
Can the Policeman catch the Thief?
11
Ernie and the Disco Unicorn
12
Can you catch the thief?
10
A Wife to Honor - The waltz of the electrons
7
Can the fugitive escape?
21
Can you survive this infinite zombie attack?
1
1 lion, with a zebra and a fixed enclosure
9
Survive the infinite zombie attack II