Who is the liar (Number of liars)?

There are 5 people. Each one can be lying or telling the truth, and they can't switch. Below, each person tells us how many liars exist in the group.

How many liars exist and who they are? Can you give an answer for N people? Explain your workflow.

Here's how to approach it in general

This means that if you can identify $k$ such that the number of people who say "there are at least $m$ liars" with $m>k$ is $k$, then there exists a solution and the number of liars is $k$. Notice that if a solution exists, it will be unique. If no such $k$ exists then the problem has no solution.

In the example given, there are 2 people who make a statement that "there are at least $m$ liars" with $m>2$. Hence there must be exactly two liars (which are Person 1 and Person 4 here).

The logic is already explained in the other answers. So I will limit my answer to how I would get the answer.

Sort
Plot
Everyone above the diagonal is lying
Everyone below the line is telling the truth
If someone end on the line, there is no solution 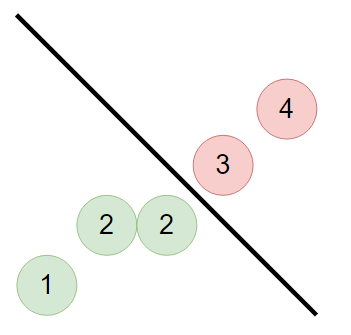 hexomino's answer is awesome and general. But let's do the brute force approach just for the fun of it.

There is no liar... Then all the statements are false. So there are 5 liars. Contradiction.

There is 1 liar. Again, not possible since all statements are true.

There are 4 liars. Then all the statements are true, so contradiction.

everyone is a liar. This is not possible because everyone will be telling the truth. So contradiction

This answer similar to Marius' answer, but instead of doing pure brute force I tried to deduce who were liars and who were truthers, here are my steps to find people who are 100% truthful/lying

Person (3) is telling the truth. If person (3) were lying, then there would be 0 liars, but having 0 liars would make all of them liars. This is a contradiction.
So there has to be at least 1 liar and (3) is 100% truthful.

Person (4) is lying. Assuming there are at least 4 liars, then everyone is telling the truth, which means there are 0 liars. This is a contraction.
So (4) is 100% lying.

Person (1) is lying. Assuming there are at least 3 liars, then everyone is telling the truth besides person (4). This is a contradiction.
So (1) is 100% lying.