Wraps and Loops—Which Sequences are Admissible?

If you take a non-intersecting closed loop on a torus (that is to say, a path which ends where it starts and does not cross over itself, drawn inside a square whose edges "wrap" left to right and top to bottom), you can use it to infinitely tile the plane in a lined pattern:

Example loop (w/ basepoint), and the corresponding tiling in the plane

Moreover, if we take our basepoint and follow the path produced on the plane diagram until we hit a basepoint once again, we find that we move through a series of tiles, perhaps not ending up where we started:

Here are some example cases to get you started (which your algorithm should correctly label as admissible or inadmissible):

UPDATE: As a reference I've written a super dumb brute force algo which just tries all possible permutations of the horizontal and vertical boundary crossings.

Here are the results for the four test cases: 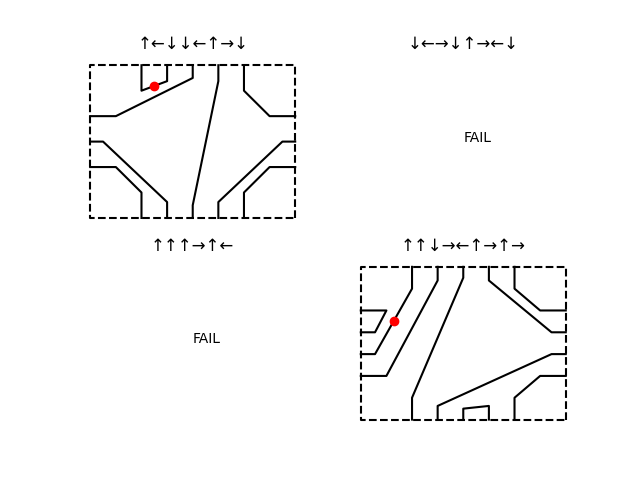 Note: The core of the algorithm is still rather sketchy, so this may be regarded as a partial answer.

1. The orderings in the algorithm, of course, directly correspond to the (spatial) order of crossings along tile boundaries
2. The rules spelt out are just a rundown of what needs to hold so no segments cross
3. Admittedly, the actual algorithmic test for/construction of the orderings is a challenge in itself.