The Dispute at the Milky Way Restaurant

Fifteen related guests visited a restaurant and got into an argument about who was the greatest among them. To settle the dispute, they asked the owner to decide.
He thought for a moment, then said “While you are eating, write down as many stars as you can name. After the meal I will tally the results.”
The guests finished their meal in peace, then handed in their work.
“So who is the greatest?” asked one.
“I dare not say; I fear another brawl. But I will send you each home with a word search puzzle. The one I chose is encoded within. And it’s not the one who named the most stars. That was a ploy to keep you occupied while you ate. To ensure you are far apart by the time you decode this, I have obfuscated your names. Tiny ladle may have named the most stars, but they are not necessarily the one I deem the greatest!”
“But there are only fifteen of us,” retorted one.
“Yes, to get you started, I added the name of my restaurant into the mix and highlighted it for you. See? ‘A star queue banded overhead’? That’s this restaurant, the Milky Way. As you can see, this is not a normal word search.”
“It’s jagged. But the letters are connected, right? Without doubling back on themselves or anything sneaky like that?”
“Certainly.”
“And you promise this reveals who you deem the greatest?”
“Yes, you all are hidden within. But once solved, one of you will stand out!”

Here is the list of participants the owner wrote down:

Here is the word search the owner created:

Text Version ('MILKY WAY' is highlighted in a jagged line)

Who was deemed the greatest and how do you know?

If the guests are not in the traditional word search, what is?

There are a few things in this puzzle which seem suspicious, unexpected, or unpleasing. Might they have a shared explanation? It can either be found directly or deduced. (If you find it, you could comment 'aha' and I'll stop giving hints to give you time to work the final stage).

What do the star counts and clues look like?

MJR (3 words of instruction) are trivial to find, essentially in plain sight, so I'm running out of hints as to how to find them. Regarding the clues, the star counts and text is critical. For example, changing 'vain queen' to 'conceited lady' makes the puzzle unsolvable.

MJR is found! Congrats @Elpharya! Now, what is "it"? Not what you probably think. Consider the entropy of this puzzle.

MJR was just an optional hint (not critical to the solution), so it was intentionally quite easy to find. Now we get to the crux of the puzzle. Can you find a single, logical mechanism which rectifies various problematic/unsatisfactory aspects of this puzzle and also makes the word search solvable? You can use MJR as a guide, or search this puzzle as a whole for additional hints/observations.

"This is not a normal word search."
"It's jagged."
Why did the guest say the puzzle was jagged? They were not referring to the 'Milky Way'. Think for example software programming or an old rug.

Why are there gaps in the star counts? What goes in the gaps?

Here is the top image search result I got for "merge jagged rows". Hopefully it will help? https://media.geeksforgeeks.org/wp-content/uploads/20200131134104/Jagged-Array.jpg (think of a solution that is simple, almost trivial, yet not immediately obvious)

You stop at Scorpius' resort villa for a visit, and find the following scrap of paper lying outside their door. "Interesting," you muse, pocketing it. 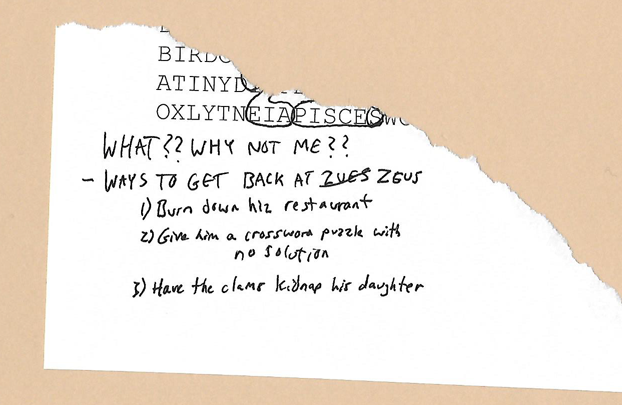 And it all becomes clear....

Looking at the most recent Hint 11, with what looks like a torn off wordsearch... but wait? The last line looks the same, but the ones above don't? actually they look familiar - 'a tiny d', 'bird'... They're the clues! So looking at the gaps, there's no clues for 4, 9, 16 and 17. So if we line up the hints as if they're in the wordsearch verbatim, and substituting the first line of the original wordsearch so it's now Row 4, and so on, we get a jagged wordsearch! [ 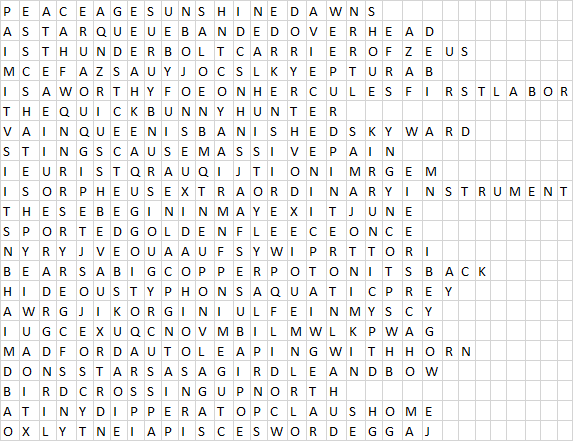 so this looks like something we can work with! We have enough of a picture that we can see a figure become clear - the constellation for Orion - apparently the greatest of the constellations. But what about Scorpius's note? Zeus (who doesn't seem to have a constellation himself) is the owner of the Milky Way restaurant and the creator of the puzzle :) 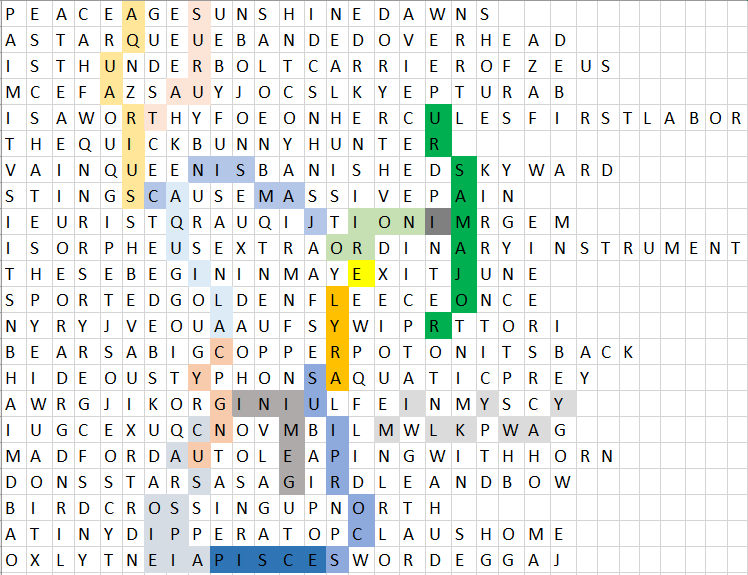 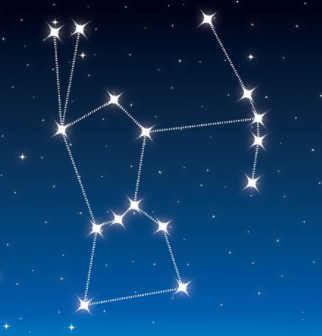 Milky way - given in the question

CANIS MAJOR/MINOR - provided by @xhienne, which is a dog

CASSIOPEIA - a queen in greek mythology known for being vain

ARIES - aka the ram

URSA MAJOR - punny with bear, and the copper pot referring to the big dipper

PISCES - a fish. Also visible on the last line of the wordsearch

TAURUS - the bull, also available as a Ford Taurus

ORION - also known as the archer

CYGNUS - a constellation that appears as a bird

Not the answer you're looking for? Browse other questions tagged word enigmatic-puzzle lateral-thinking word-search or ask your own question.