I sent six puzzles to the Times but received the following reply:

Dear Sir,
We are sorry to reject your sequential crossword submissions for the following reasons:

I was going to try the Sun instead, but misplaced them. All I have are the titles!

Can you reconstruct them? Also, please use the result to answer the following question:

What are you if you spend too much time on PSE? (7)

Helpful note: Series ascends to one result. So this is ultimately doable. But if your head is muddled, get some sleep and try again later.

Solve the first two easy ones. Then continue the 3 patterns: size, structure, and sequence.
What does the note actually mean?
What is 2.4 in relation to 3?

"Atop Nobelium" appears to clue ON NO.
This can be arranged into a 2×2 square, with ON on the top row and NO on the bottom - can we make similar word squares out of the others?

What's up with "2.4 note mtg. change"? This one and the ones coming after it don't seem to break down as clearly as the first two.

But the second grid started with TWO... and the first almost started with ONE. Could the third start with THREE? There's only enough room for four fifths of THREE... and that's exactly what "2.4" is!

Similarly, fortissississimo would be notated "ffff", or FOURF - so it seems like the number on the top row repeats if it's too short.
And that means "5th-gen wireless" is FIVEFI, and 666666 is SIXSIXS, or "six six[e]s".

With this, we can break into the others:

A four-letter word for "change" is EDIT, and that means "note" could be HEED. "mtg.", an abbreviation for "mortgage", then becomes REFI.
a "currency" that starts with F is a FRANC. Then a "watcher" is an OGLER, "supreme" is ULTRA, and duplicate is RERUN: 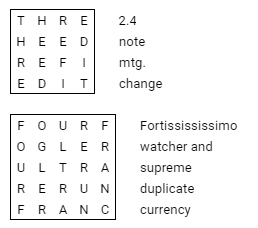 I was trying to use EARWIG for "wasp", but it turns out VESPID was actually correct. "nimble" clues an obscure Scottish word, FEIRIE. And "overhead" appears to be IN DEEP, as in "to be in over your head".

And I'm not completely sure of the last one: 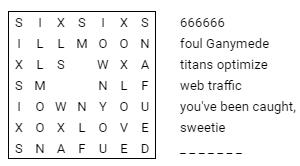 This was my best attempt, making the final answer SNAFUED. But this doesn't explain "optimize web traffic", and "you've been caught" is also a bit questionable.

After some help from Jafe, Stiv, and Jaap Scherphuis, a more likely grid is the following: 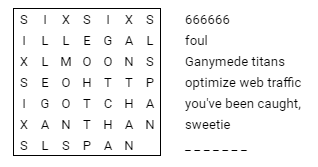 But SLSPAN_ doesn't seem to be a sensible phrase. It's possible that if the last letter is E, this could be anagrammed to NAPLESS, which would fit as a final answer?

Not the answer you're looking for? Browse other questions tagged word pattern crosswords or ask your own question.

6
Not much to this one, once you've understood it
5
Spying has never been easier
65
You've Probably Seen Me Naked
33
I've been everywhere, man
6
You've heard this all before
33
Bob has never been a M before
6
Caught in the Riley Riddle!
6
What I decorated has been printed all around
8
Without my suffix, you've lost the game
7
You've got to be kidding me!