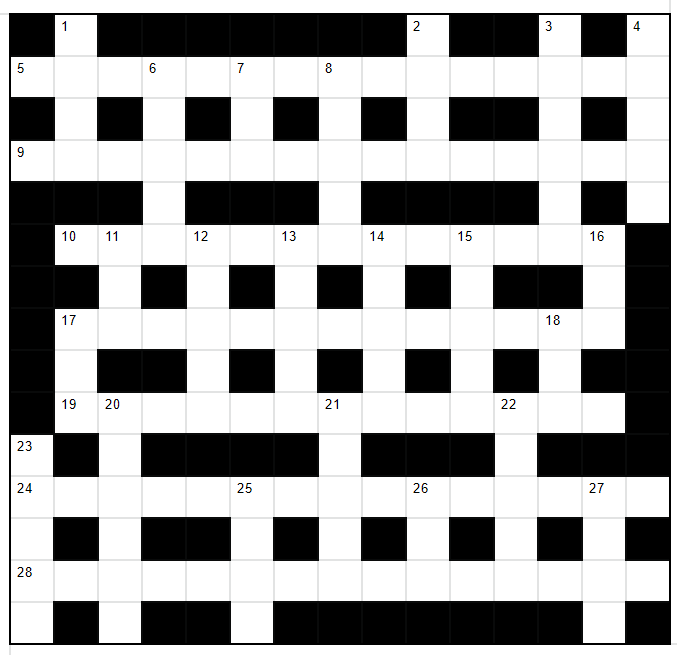 There are no horizontal word boundaries in the grid. Answers to "across" clues must be written on their correct row, in the order given, with no spaces.

The first letters of all twelve "modified" clues mentioned above spell out the real name of a notable person who was better known by another name. This other name reveals two additional members of the group.

Across
5. a) Softcovered container with head of polar bear moving inside
5. b) Author of East to West to retire... from east to west
9. a) For instance, mustard chicken
9. b) Retreating American soldier grabs a little BLT, a type of sandwich
10. a) Acquire retro Tesla, for example
10. b) Keratin rowing essentially makes small sound
10. c) Ameliorate Al, perhaps in possession of tourist on vacation
17. a) Pine of great size
17. b) Rome escaped sailor with pair of galleys? Hard to believe
17. c) Office gutted, evicted by Sylvester Stallone, having spoken to describe 20 down
19. a) Language spoken in the west of Africa and used in Microsoft Windows
19. b) Support for Laurel and Hardy's fourth
19. c) Lare cut in quiet criminal results in loud cry
24. a) Sick man thrown out of factory
24. b) People of Senegal about to eat tip of lion's tail
24. c) British tabloid enthusiast turned – he's caught inside (2 wds.)
28. a) Slime invasion's start: Top of the morning? (2 wds.)
28. b) Warmth and light from the skis of sportsmen from Arizona, Hawaii and Nebraska 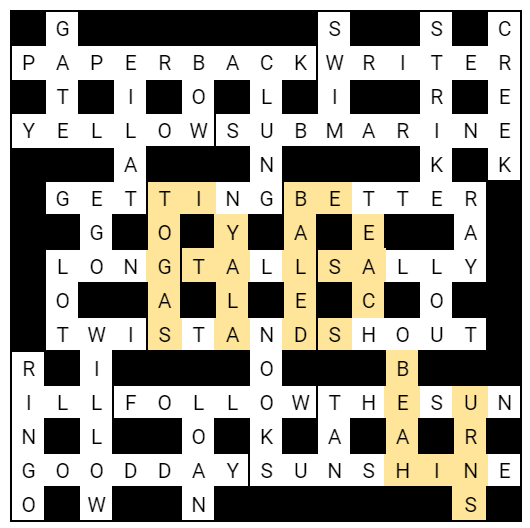 The added letters spell GEORGE -- and indeed, he was a BEATLE, as spelled out by the moved letters in the Down answers.
The first letters of all the added answers spell KAROL WOJTYLA, who is better known as Pope John Paul II (giving us two of the others, JOHN and PAUL.
And of course, the last Beatle, RINGO, is in the answer to 23-Down.

The highlighting has been done in the above grid, and it has an AB spelled in the middle, with a 4 in the bottom right. We need to use the black squares on the left of the grid, which are conveniently shaped like an F, to finish spelling out "FAB 4".

Every single Across multiclue is a Beatles song! Some of them have been re-parsed, while others follow natural word splits. But from the multiclues we get all of these Beatles songs:
5. PAPERBACK WRITER
9. YELLOW SUBMARINE
10. GETTING BETTER
17. LONG TALL SALLY
19. TWIST AND SHOUT
24. I'LL FOLLOW THE SUN
28. GOOD DAY SUNSHINE