I had heard that my good friend Ingrid Deduction was back in town, so I popped round to her apartment today, only to find she'd got herself a new flatmate.

"Polly O'Mino, and it's a pleasure to meet you," said the newcomer in a lilting Irish accent, shaking my hand warmly. "You've actually caught us in the middle of designing a new puzzle together - would you care to test-solve it for us?"

She didn't have to ask me twice... Arranged on the floor were 27 of the 35 free hexominoes, grey and white in colour, and each uniquely labelled. Meanwhile, the surface of a nearby table had been divided into a 9x18 grid of squares.

"We need you to reassemble the table," said Ingrid. "We'll start you off..." So saying, she picked up the 'd' hexomino and positioned it in the bottom-left-hand corner of the grid. I frowned.

"This isn't much of a puzzle," I complained. "There's doubtless hundreds of ways to position all the pieces so they fit in that grid."

Polly smiled. "Indeed - but there's only one correct way, which fully explains all of the clues you see before you..."

Hang on - clues?? All I could see was a bunch of letters, some different coloured squares, and - was one of the letters a slightly different colour to the rest? How were these helpful clues?! What were they expecting me to do here?!

TASK: Cover the grid exactly using all 27 hexominos, without overlapping or leaving gaps (every grid square must be covered by exactly one hexomino unit). Hexominoes may be rotated and/or reflected. Complete the task in the only way that makes sense of the hexominoes' labels and colourings.

Please explain your grid-deduction process - this puzzle can be solved without guesswork once you have worked out what you need to do! 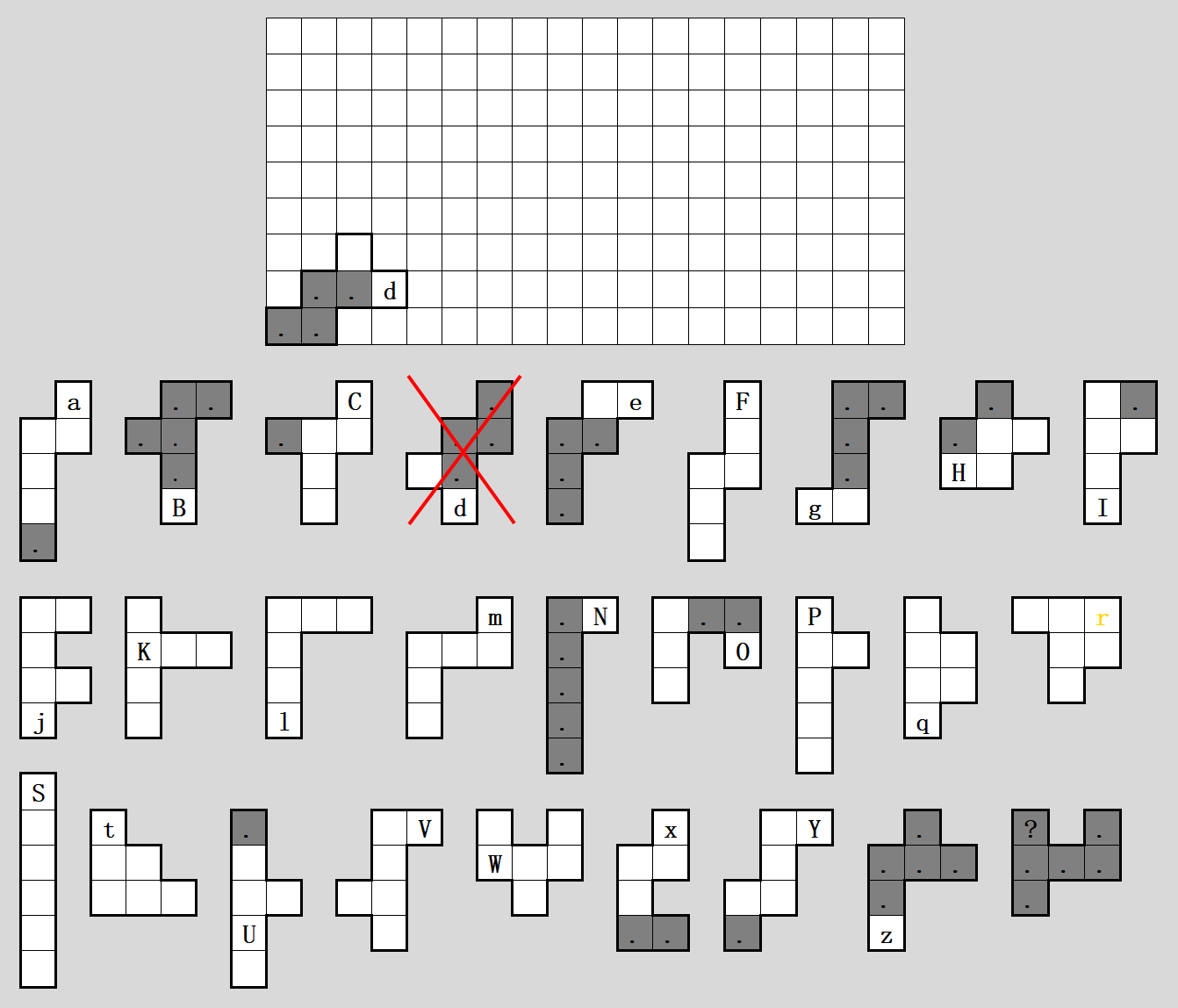 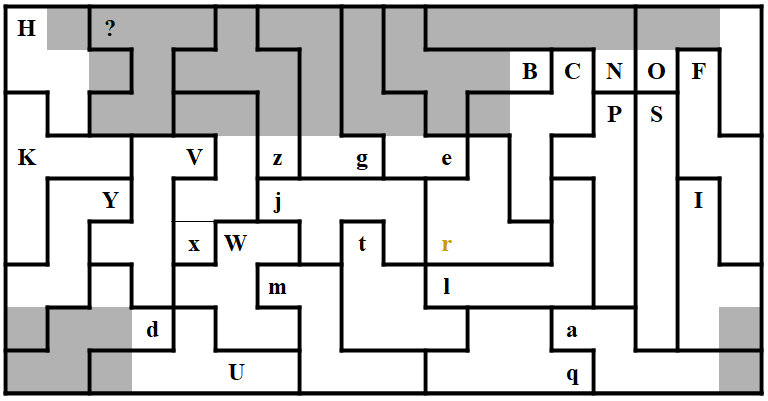 Remember that Stiv loves the periodic table. And at Stiv's prompting, I realize Ingrid did ask us to "reassemble the table"...I just thought (hoped?) she meant something else by that. Then have a vague idea, but be able to look up in Wikipedia, that the periodic table is 9x18, just like this puzzle. And the number of unshaded squares is 118, just like the number of elements. Now we're cooking with gas!

Notice that some of the letters are capital and some are not. Where the little "d" is given in the table there is no obvious way to correlate it with an atomic symbol. But the capital letters...yes! Look at H...it clearly fits where hydrogen should. And O...it's oxygen for sure. All of the capital letters are actually indicative of the placement of the hexomino, based on the corresponding symbol in the periodic table. Following this for a little bit, we get some obvious placements in the grid: 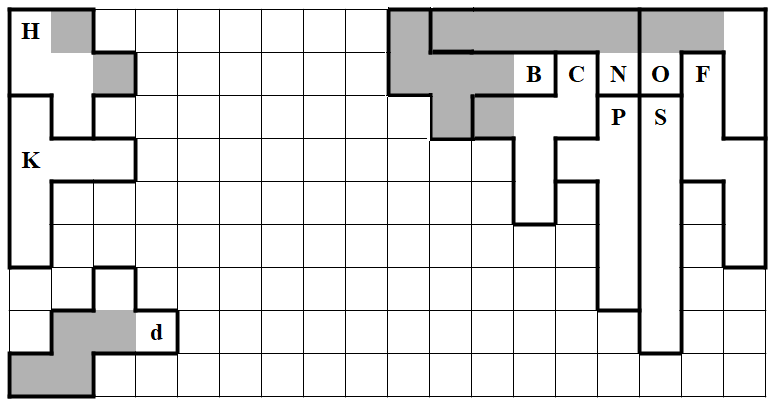 The shaded squares force the placements for H, O, B, C and N, and the shape of S forces P and F as well.

An important side note:

It looks like the lanthanides and actinides are not centered and actually start in column 4. The placement of hexomino "d" clues this, as well as the I (iodine piece). Moreover, the shading in the U indicates that this version of the periodic table has lanthanum and actinium in the main table, and lutetium and lawrencium in the f-series. There's no problem with this, since there is legit debate amongst chemists about these items. Just important to note.

Look at Y, which has to go in R5C3. The shaded square in this hexomino must be in either R2C5 or R8C1, but the former placement would isolate R3C3. Also, the I (iodine) and U (uranium) placements are fixed based on the lanthanide/actinide standards. With the I placement, the only unplaced hexomino with a single shaded cell at the end of a 1x3 tail is a, which must go in the bottom right corner. 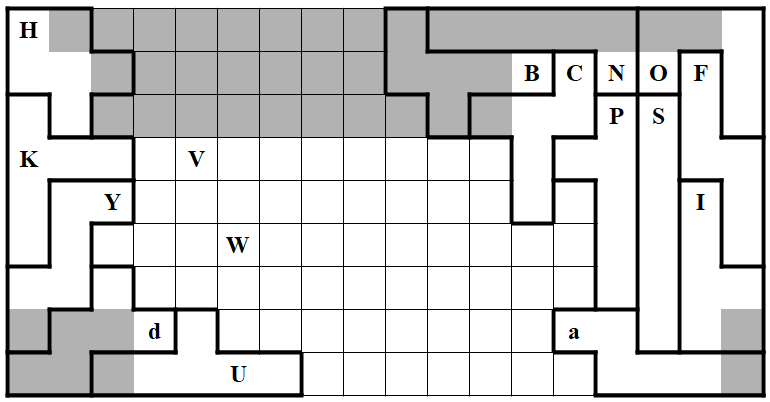 Looking at R3C5, only x can cover it without either covering the V or leaving R2C5 isolated. This forces the placement of the V, and then the W. Back to the shaded area, we see that only z can cover R2C5, then g has to cover R1C7 and e fills in. The grid thus far: 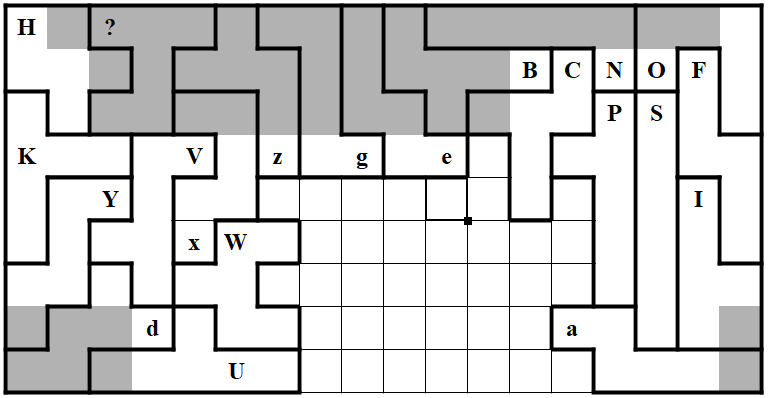 Only 6 pieces left to go: j, l, m, q, r, and t. We have not yet used the fact that the little r is colored differently from all of the others. Maybe this is Stiv giving a clue as to its placement...maybe it correlates with an atomic symbol letter. On the other hand, the letter is colored...gold? Worth a shot? Well, I asked Stiv and he said the color is significant. So I'm going to guess the r character must be on gold.

Suppose the r hexomino does not cover R4C12. None of j, l, q nor t can cover R4C12 without overlapping r. m could, but it would force the hexomino to r's right to then block off R9C14. So r must cover R4C12.

So the hexomino right of r must be an l. Then R9C14 can only be covered by q (m and t don't fit, j would leave a blocked square). Again, we have three cul-de-sacs: R5C8, R7C8, R8C12. Only j could cover more than one, but if it covered R5C8 and R7C8 there would be no place for the m, so again each remaining hexomino covers a cul-de-sac. t clearly cannot cover R7C8, since it would isolate too few squares along its diagonal. If it covered R5C8, neither j nor m could fit to its right to cover R8C12, so t must cover R8C12, which forces its orientation. Then only m can fit below, and j is forced.

Not the answer you're looking for? Browse other questions tagged knowledge enigmatic-puzzle grid-deduction tiling polyomino or ask your own question.

16
Ingrid Deduction pops by with a puzzle