I recently went to a furniture store where people spend my annual salary on a garish commodes and ostentatious vitrines.

I note a curious code at the bottom of each item’s description label. Some examples:

I assumed CP is Cost Price, and SP is Sale Price. However I didn’t know what to make of the code, I would expect to see repeated letters at the end of the code to represent zeroes, or some other pattern, but there was none of that.

I dared ask the prices of two items and noted they consulted the label before informing me. It took them about a second or so to decode it in their head.

This is an actual puzzle I've encountered. I do not have a solution.

What puzzling strategies might I use to to crack this pricing code?

Here's my best attempt. I have no proof for this, and while the solving path seems semi-plausible, the end result doesn't really. If the result is useless, I hope the ideas I had can at least help. At some point, with the assumptions I made, I just saw it as an interesting puzzle on its own (even if my assumptions are wrong), since it all worked out fairly nicely in the solving process.

Let's start with some wild assumptions :)

Watch dealers do something similar. They have the sale price in "plaintext", and the money they owe the dealer in a letter code. For the code, they use a secret 10-letter word with no repeating letters, labelling the letters of it 1234567890. E.g. if they use the word BLACKSMITH, MLKH would equal 7250. Source

If we assume this is somehow also the case for this store, we run into the first problem: We know the last given example had a price of \$7500, but both SP and CP has five letters. This can be explained away if we assume the first letter is some kind of meta information. Sometimes this may be a cost/profit ratio or other things. Source

Let's test this on the known examples

\$650 and \$7500 both have a 5 in them. If they use a secret word, we would have to encounter a duplicate letter in the appropriate positions. And we do on the SPs with the letter S, as long as the first letter indeed is some meta information.

We'll conclude that T=6, S=5, P=0, O=7, M=0, V=0. We'll also conclude that since they told you the value of the SP, the value of CP is less than SP for a given item because CP is the price "they don't want you to know", e.g. cost price or something similar. This hints towards a slightly different approach than the watchmakers. It looks like we have one 9 letter word labelled 1-9, and the rest of the alphabet just represents 0. We can already see that a substring of the secret word has to be STO, since S=5, T=6 and O=7. Unfortunately, it can't be the substring STORE because if E=9, the CP of the last item would start with a 9, making CP > SP, contradicting our assumption.

If you somehow still believe me at this point, we can make some deductions

To further justify this, we can run a frequency analysis of all the given codes. The sample size is small, but nonetheless, you would expect letters that do not represent 0 to occur more often than a specific letter that does represent 0, since there are so many of them. The top 5 results (the ones which occur more often than 2x times) are indeed a subset of UCOLSBTE. It's also noteworthy that it makes sense that S is the most common one, since 5 is arguably the digit which gets used most for prices with no decimal points other than 0. (steps of 50/500, etc) 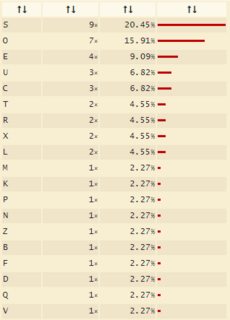 If you're still reading at this point

We could already make some good guesses at this point. Nonetheless I ran a quick dictionary search with the given criteria. And indeed, the only sensible combination that matched was BLUE STOCK = BLUESTOCK, giving the following map (all the remaining letters equal to 0):

The plainprice map would now be the one shown below. Unfortunately, this is where it all seems to crumble for real-life reasons. Unless the store is extremely over-priced, I don't see how e.g. an item that costs \$8500 has a cost price of \$2745. That would be insane. My best attempt at explaining myself at this point is that CP is not exactly the cost price, but something similar that's less than SP :) Or maybe the meta-letter has something to do with it...

Not the answer you're looking for? Browse other questions tagged cipher real or ask your own question.