Mason likes the game Battleship, but he doesn't win much. However, Sherry, his opponent, is so confident in her skill and luck that she has agreed to let Mason have his five friends help him.

Sherry's method for placing her ships is completely random. Each side has 5 ships, and they reach the position below, where Mason has sunk all of Sherry's ships except for her Battleship, which is 4 units long. 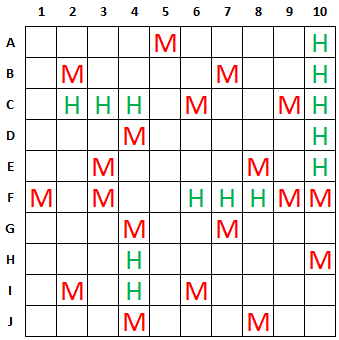 Each of Mason's friends want to help, but they cannot seem to agree on the best move. Clair insists on F2, but Mike is sure about H2. Bartholomew recommends D8 and Jessica tells him to play G6. Lastly, Pat says to play D5.

Put his friends in order from "Best Advice" to "Worst Advice". Did one of them find the best move?

E5 is the best; it covers 5 locations.

The "best" move for this puzzle is the one most likely to hit the ship in one shot, as the puzzle doesn't allow for further follow up shots. There are 23 possible positions for that ship, and 68 spaces where a shot could be placed.

Due to the size of the ship and previously placed shots, we can find both where shots cannot possibly hit the ship, and places for shots which cover more than one position.

For instance, G6 cannot hit the ship because previous shots placed at G4, G7, F6, and I6 would have most certainly hit that ship given that the ship is four spaces long. So G6 could not result in a hit.

Taking F2 as an example, there are 5 spaces in a vertical column where shots have not previously been placed. A 4 length ship could exist in the four top spaces, or four bottom spaces, and F2 covers both possibilities. Thus, F2 would hit 2 out of those 21 possible ship positions, giving you a 8.7% chance of hitting the ship.

If we perform this analysis for every possible shot we can take, we can find how many positions each shot could cover: 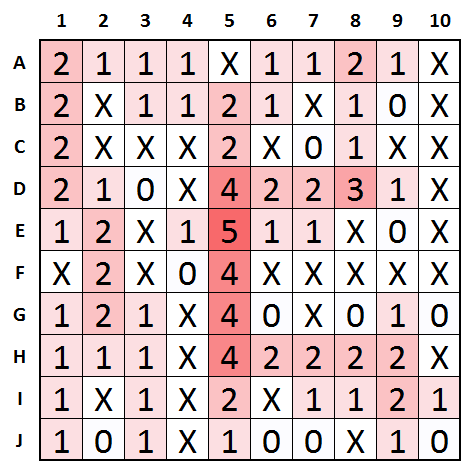 We find then that the best space for a shot which covers the most of the 21 available positions is E5, covering 5 positions, and having a 22% chance of hitting the ship. This is not among the suggestions the friends made, though. Their shots rank as follows, from best to worst:

Once E5 is taken you've removed 5 possible locations, leaving 18 if it didn't hit the ship: 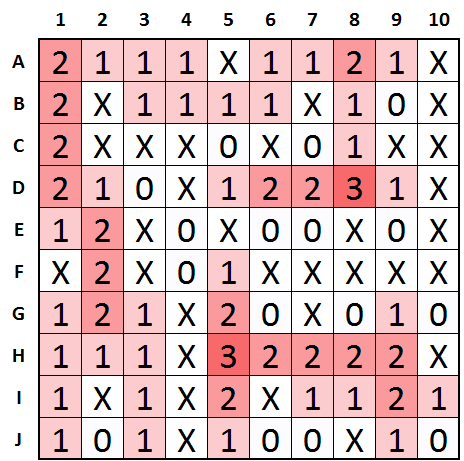 Based on the number of possible eliminations:

And Jessica is obviously on Sherry's team, since G6 covers 0 possible battleship locations.

Tip of the hat to @JonTheMon, I would have also recommended E5.

Since some of the locations overlap, it may be better to look at how many squares can be eliminated by each guess. The end result will be somewhat different.

A miss on F2 eliminates the following other squares from contention: D2, E2, G2, and H2.

For H2, it doesn't eliminate any other squares

G6 technically eliminates itself, but it already wasn't an option

D5, although it eliminates a lot of potential battleship positions, only actually takes 1 other spot out of the running - C2. All the other spots are still possible battleship locations in another configuration.

So by this metric, D8 is the best of the 5 guesses, potentially eliminating itself plus 5 other squares. That's followed by F2, then H2 and D5 tied, and G6 in last.

I'm interested to hear people's opinions on which of the two metrics are "best". To me, the potential flaw in looking at it from the number of ship locations that a spot is part of is that some spots are part of other potential locations too. So guessing D5 doesn't help you as much with regard to B5 because B5 could still be part of the ship.

I'd say the order from best to worst is

And the best move I'd say is E5, since that hits up to 3 positions and gets 10 spaces of coverage.

6
Dots and Boxes- Best Move in Given Position
3
Battleship- Part 2
6
Twilight Zelda Guardian Puzzle
36
Titanic Tic-Tac-Toe
10
Who Wins At Horsie-Push?
3
Sink me and live
7
A game of Connect 4++
16
5 people each have 5 equal cards
8
Optimal next move in minesweeper game?
13
A Key Game of Battleship