Twisty puzzle composed of hexagonal prisms, with As and diamonds 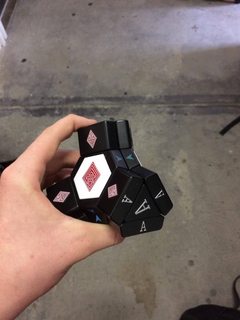 My friend let me have a go of his cube and neither of us know what its called or where to buy one.

It was first released in June 2004 by Mefferts under the name Jackpot, and later it was renamed Platypus, and after that the New Generation Puzzle. It probably was sold under other names as well.

See for example this site for some info. There were several versions, including the Supreme edition which lights up a face when it is solved.

Unfortunately it has not been in production for some time, so there is nowhere that you can buy one new.

Not the answer you're looking for? Browse other questions tagged puzzle-identification cards twisty-puzzles or ask your own question.

25
Is it possible to scramble a Rubik's cube such that no two squares of the same color are touching?
26
Where has the last dollar gone?
15
Help with the name of this puzzle
4
How to discover twisty puzzle algorithms that are not commutators?
2
Puzzle with numbers you have to add up to get given numbers? Can't remember the name
4
What is the 'Three Cube Problem' in the Mega Test?
5
A Twisty Puzzle my friend barely remembers
4
What is the name of this puzzle with two overlapping circular tracks of smaller objects (spheres in this case)?
13
What's the name of the kind of puzzle where in-story solvers have more information than us, and how far they get is a clue?