A swarm of dice bring nectar back to the hive from a domino garden. I just finished adding a new puzzle race game to Donimoes, my collection of domino puzzles and games, so I thought I would post a few bonus problems here. The game is Bee Donimoes, and the bees are dice flying back to the queen bee. Each die has to stay on the numbers that match it.

Bring the nectar back to the hive in as few moves as possible. The biggest die is the queen bee and doesn't move, the others have to form a connected group around her.

Each problem has a diagram of the dominoes, so lay out the dominoes to match it. Look for the dominoes with a number at one end and a blank at the other. The number on each of those dominoes is the starting space for the die with the matching number. Take 3 dice, turn them so the numbers 1, 2, and 3 are on top, then place them on their starting spaces.

Here's an example setup with the dice added: 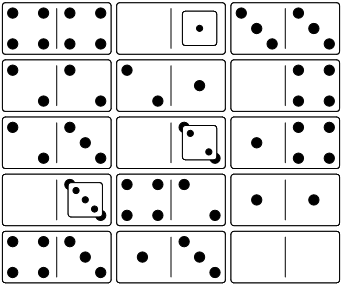 The die with the largest number is the queen bee, which never moves during the round. All the smaller bees have to bring their nectar back to her in one connected group. (Diagonal connections don't count.)

The dice can only land on their own numbers. They can move in two ways:

The blank on the other end of the queen bee's domino is wild. Any die can land there, if it's empty. A die may also leave the wild space on a later move.

Let's solve the set up above, where the 3 die is the queen bee. It seems best to start by moving the 2 where it can guide the 1 onto the wild spot: 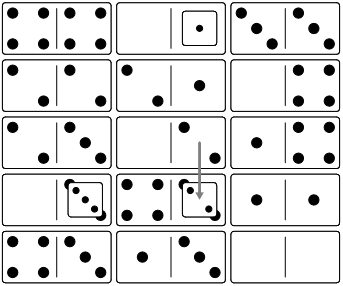 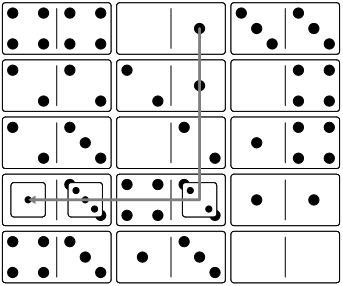 Finally, the 2 can complete the connected group with the help of the 1, in a nice leapfrog pattern. 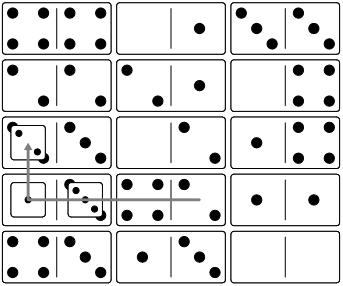 To describe each move, use the number of a die, a direction, and a distance, then add more directions and distances if the die turns corners. For example, 1R3 means move the 1 die to the right, 3 spaces. The solution above would be: 2D1, 1D3L3, 2L3U1.

Here's a problem to solve for today. Try to solve it in the fewest possible moves, and post your solution. The solution will include two rounds: three dice and four dice. 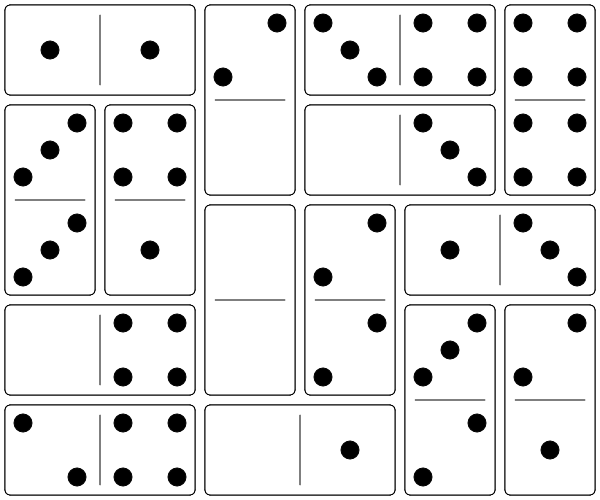 Image Legend: White is a die location, Red is an unoccupied starting square, Blue is the wild space. 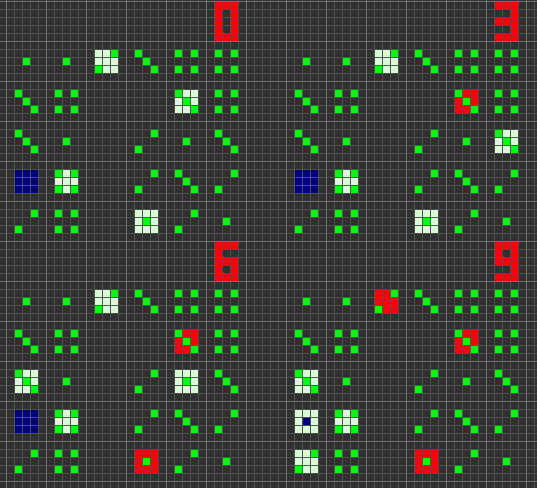 Not the answer you're looking for? Browse other questions tagged dominoes or ask your own question.