Professor Halfbrain has spent his entire weekend by filling $10\times10$ tables with the digits $0,1,2,3,4,5,6,7,8,9$ so that each digit occurs exactly $10$ times. According to the professor, such fillings are called legal fillings. Halfbrain detected oodles and oodles of fascinating legal fillings, and he derived two extremely deep theorems on them:

Professor Halfbrain's first theorem: In every legal filling of a $10\times10$ table, there exists a row or a column that contains at least two different digits.

Professor Halfbrain's second theorem: There exists a legal filling of a $10\times10$ table, in which every row and every column contain at most ten different digits. 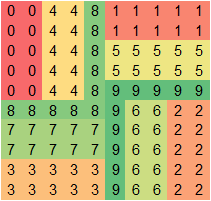 This is optimal. Here's why we can't do better.

Say each row and column had at most $3$ distinct digits. Label each row and column with those digits. There are at most $60$ digit labels, so some digit appears in most $6$ labels, say $r$ row labels and $c$ column labels. Since only those rows and columns may contain that digit, it appears at most $rc$ times in the grid. But since $r+c\leq 6$, we must have $rc\leq 9$ (maximized for $r=c=3$), so that digit can't appear $10$ times in the grid. Contradiction.

since 10 has no integer square root my guess it would be the square root rounded up. So my guess is $x=4$. I have no solution (yet) though