Sequence of boxes with a rotating arrow, large (un)shaded circles in the corners, and a small circle [closed]

Ask Question
Asked 1 month ago
Active 1 month ago
Viewed 66 times
0
$\begingroup$
Closed. This question is off-topic. It is not currently accepting answers. 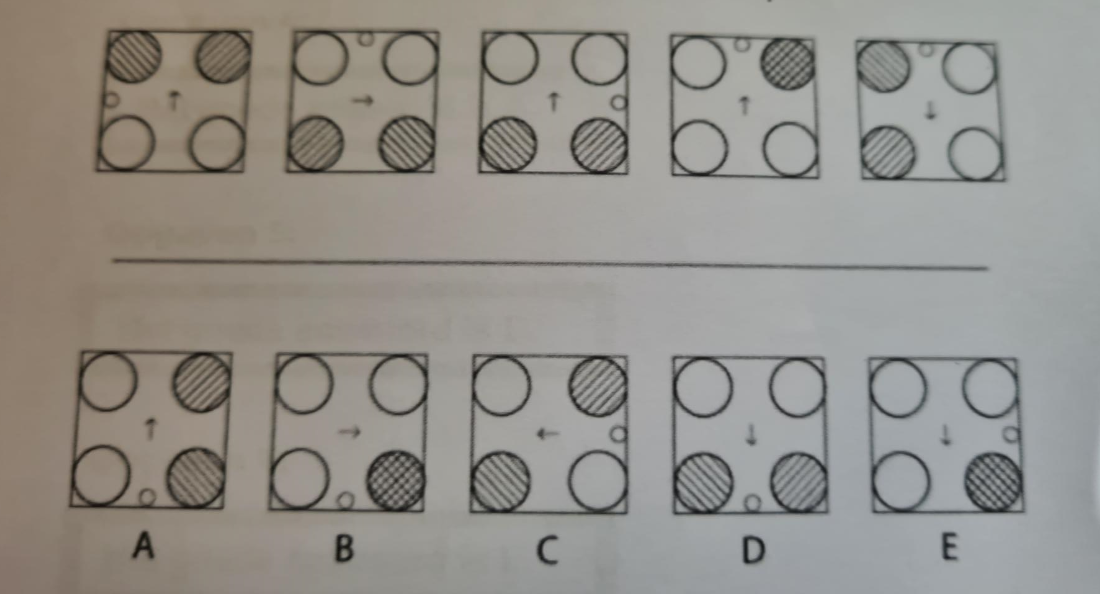 What is the next image? The small circle seems to follow the arrow, which would eliminate C and E.

I think the next image is:

I'm going to use W, X, Y, and Z to denote the top left, top right, bottom left, and bottom right corners of each image, respectively.
The circle with the lines going from the top left to the bottom right moves in each image in the sequence, yielding the pattern WZYXW..., so we can expect it to be in Z next. Assuming your small circle theory is correct (I have no reason to think otherwise), this further eliminates D, leaving just A and B.
Applying the same rationale to the other circle gives us XYZXY..., so we can expect it to be in Z next, leaving only B as the final answer.
I can't find an obvious rule for the direction of the arrow, but if it's assumed that its only role is to show where the small circle will be in the next image, than its orientation can be arbitrary.

14
IQ-test-type question - sequence of large triangles with black and white small triangles in them
2
Abstract image puzzle with a rotating arrow and a circle
2
Which yellow answer completes the sequence?
15
Aperiodic Table of Alien Elements
5
try to discover the pattern
1
Figure out the pattern
7
What is the missing number and the correct sequence?
7
Shaded boxes sequence
0
Progressive Matrix question - shaded and unshaded circles in squares
4
Sequence of boxes with arrows in the corners