An entry in Fortnightly Topic Challenge #51: Non-rectangular grids. For the avoidance of doubt, while the puzzle set-up is based on a real quiz show, the exact scenario described here is entirely fictional! 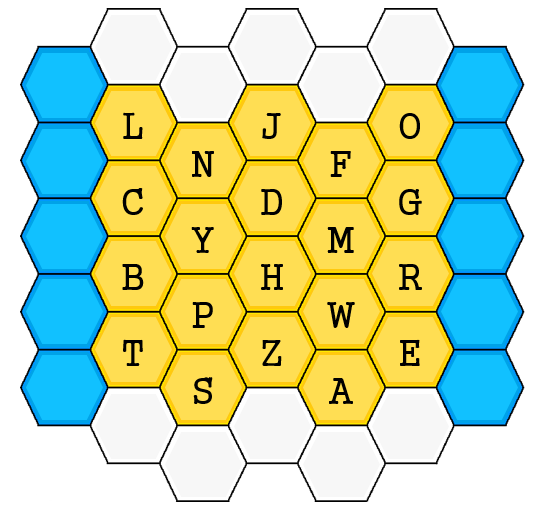 The quiz show Blockbusters enjoyed a long run on our televisions back in the 1980's and 90's. The concept was fairly straightforward: A team of two contestants (blue) competed in a quiz against a single individual (white). The playing grid consisted of 20 hexagons, each containing a different letter of the alphabet. A contestant would choose a thus-far-unused letter, and the host would then ask a general knowledge question whose answer began with the chosen letter. When answered correctly, the colour of the corresponding hexagon would change to match that of the successful team. The aim of the game was to give enough correct answers to trace a continuous coloured path of adjacent hexagons between two opposite sides of the grid - top-to-bottom if playing alone as white, or the slightly longer left-to-right if playing together as blue - at which point the round was ended and the winner declared.

I remember one particular episode when an incredible coincidence occurred. The contestants were a woman called Carol from Manila, and a married couple called Eamonn and Monica, from Montreal. Unusually, on this occasion all twenty of the questions were answered before one side emerged victorious.

While this was rare in itself, I also happened to notice an extraordinary pattern among each team's correct answers. It was only afterwards that a police investigation discovered that the entire show had been rigged by a betting syndicate in a far-off country (goodness knows why). Both teams had been in on the ruse, reading signals in the answers that told them which of them should buzz in, and everything had gone to the criminals' plan for the first nineteen questions... but then, hilariously, on the final question things went awry for the syndicate, and the wrong team won the show! As a result, they lost an awful lot of money!

TASK: Given the pictured playing grid and the question list below – and the fact that both teams answered 10 questions correctly – can you show me the coloured state of the board at the end of play and explain the patterns in the two team’s answers? Moreover, can you identify which question was the last one to be asked, and why it caused problems for the syndicate?

The cues that were being used:

For Eamonn and Monica, from Montreal,

For Carol, from Manila:

"Carol" and "Manila" anagram to CORAL and ANIMAL -- and each of her answers is also an animal anagram.

The final board state: 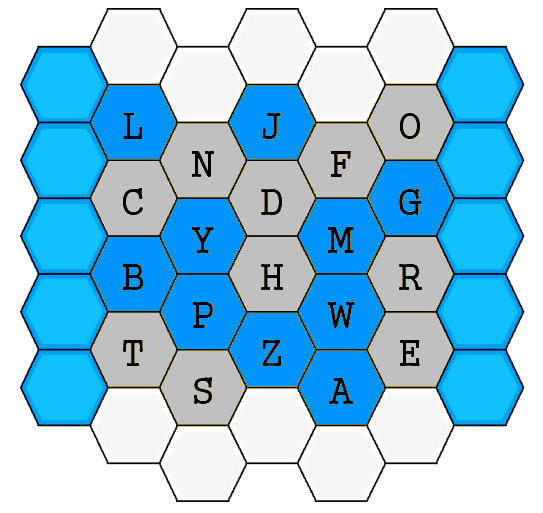 And finally, the mistake:

The last question was M, with the answer MARTIAN -- this was supposed to be Carol's clue, because it anagrams to TAMARIN. But it also has a three-letter month abbreviation, so the pair picked it up instead.

22
Sergeant Sequence takes the case
8
What is a Watchful Word™?