Were the Decipher II and Decipher III puzzles solved, and if so when and by whom?

The Decipher jigsaw was a relatively famous puzzle released in the early 80s, promising a $100,000 dollar prize to those that could solve it. After two years with no winners, the creator, Warren Holland Jr., released more and more hints until ultimately it was solved in 1985. You can read more about it in this paper released by MIT students who used access to MIT's computing power to help solve the cipher which was present on the jigsaw. 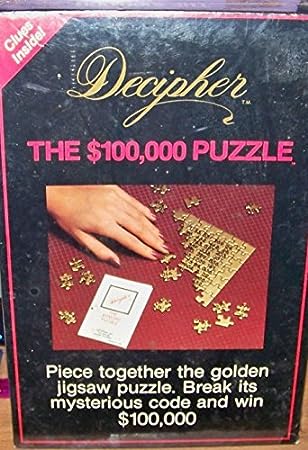 Holland went on to release another two puzzles; Decipher II and Decipher III. Both of these offered similar $100,000 prizes, but I'm struggling to find any info about solutions for them online.

So, were these ciphers solved and was the prize claimed? If so, by whom, and when?

Two videos have been made that investigate this topic in detail and explain who won each.

The first video about the Decipher puzzles has a good background. https://www.youtube.com/watch?v=meaUE2b5whI

Karen Puzzles has detailed out which are solved and all the clues that are available to date in this doc including images of the box, puzzles and news articles.

To answer the question directly there is no public record of any Decipher III puzzles being solved however some of the Decipher II were solved (at the time of writing).

Not the answer you're looking for? Browse other questions tagged cipher jigsaw-puzzle puzzle-history unsolved-mysteries or ask your own question.

10
When and where was the first logic-grid-based puzzle published?
6
Decipher the crazy emails!
14
Decipher the location of the pirate treasure
15
Decipher the clues, escape the prison!
70
Unsolved Mysteries: Kryptos
1
Decipher the word CFKQYUQ
2
Decipher the message
16
The programmer who loves dogs and puzzles
1
The Librarian's Labyrinth - Part III
4
Decipher the language