How to get the least possible sum in a closed loop set of squares?

The figure from below represents a set of 12 squares joined forming a closed loop. By using only the numbers from 1 to 12 fill in the blanks.

The condition is that, without repeating any number. It must be fulfilled that the sum of the four values written along each side of the largest square is the same and the smallest possible. According to this consideration. What is the maximum value of the sum of the numbers that are written in the blueberry shaded squares? 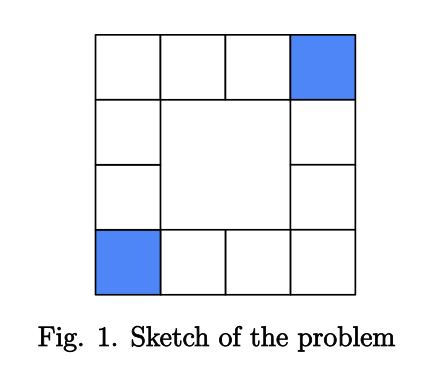 The alternatives given are as follows:

Does a way to solve this, without going in circles, exist? I've been trying to do it on my own but with not much success.

If you are confused, the requirement is that each group of four squares on each side of the greater square must have the same value.

While attempting this I figured that the numbers from 1 to 12 could be split in pairs having the same sum. Let's say 13, as 12+1, 11+2, and so on will follow that condition. But this didn't help much. I think the given condition forces each diagonal corner of the greater square to make the same sum, to balance the inner sum (the squares which go in the middle). I've also noticed that in order to get the least possible sum it might help to group in pairs the numbers which are on top, let's say 12, 11, and so on.

I tried plugging in numbers for more than 40 minutes and I got stuck.

Does a strategy exist for this, other than just putting numbers randomly? Please include the logic used in answers, and if similar logic could be used in a similar environment. A wordy solution would be really appreciated.

Since this was found in an older IQ test I assume that the intended approach would not use any sort of sophisticated algebra or so. So please try not to present an algebra based solution because I doubt that would be the way for resolving this puzzle.

Can someone help me here? Were my initial thoughts along the correct track?

Short way to guess at the answer:

Proving that this works:

Now you asked about strategy:

There are few enough numbers that once you start with this strategy, even if you make a couple mistakes you will still come to the answer relatively quickly.

5
The smallest value on the blackboard
13
Three Stacks N cards
3
Three baskets with numbered balls
5
How do I find the total sum of the numbers occupying three different regions of a $3 \times 3$ grid?
4
NineFind - Which 9 Numbers Are Correct?
2
Forming pairs of trominoes on an 8X8 grid
0
How do you find the perimeter of a set of odd looking squares and triangles?
6
How to get the least number of flips to a plastic chips to get a certain figure?
1
How to arrange a set of cubes to get a tower of two?
3
Exchanging stones on a 8x8 board with sum of two adjacent numbers not being prime