You've got to be kidding me!

Within this Boggle board is a set of eight words with a common theme. What are they/what is the theme?

To make a word in Boggle, connect at least three letters horizontally, vertically, or diagonally, without using the same letter (e.g. the bottom left "O") twice.

Within this board you can find:

the names of eight characters from the webcomic Homestuck.

All of these can be found in the grid starting from the 'D' on the top row, the 'R' on the second row, or the 'J' on the third, like so: 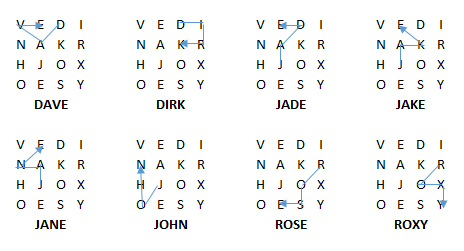 Regarding the title of this puzzle, @Deusovi helpfully points out in the comments that all eight named characters are referred to collectively as 'The Homestuck Kids', hence a connection to 'kidding'...
In fact, as the OP comments below for completeness: John, Rose, Dave and Jade are known as the Beta Kids, while Dirk, Jake, Jane and Roxy are the Alpha Kids, the two groups that play different versions of the fictitious game Sburb that exists within the Homestuck universe.

Not the answer you're looking for? Browse other questions tagged word knowledge word-search or ask your own question.