What was I supposed to do?

I've had the strangest day. Today I was invited to play in a chess tournament (or so I thought). As a keen (and pretty good) chess player, naturally I accepted and made my way to the venue. On arrival I and the fifteen other players were directed to sit at different tables, set out in two rows of eight, and each of which had a chessboard with a game already in progress - and a very strange game at that. The pieces were arranged like this: 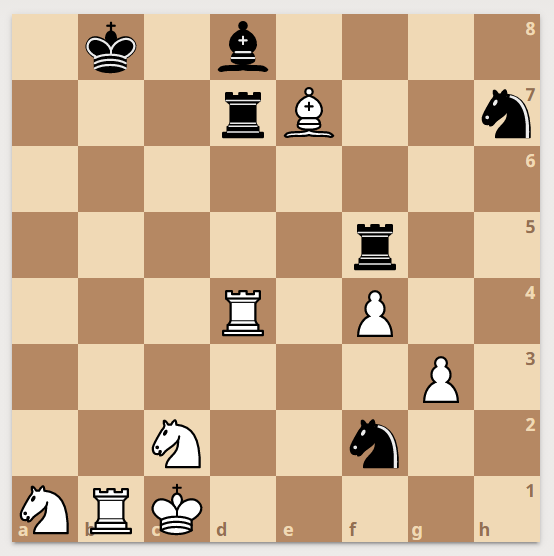 I started to analyse the position - obviously white had been last to move, and... but my thoughts were interrupted by a guy standing at the front with a clipboard, who spoke.

"A rare opportunity has arisen that one or more of you may wish to take advantage of. You may not speak. You have ten minutes."

Ten minutes for what? I thought to myself. But before I could figure out whatever was expected of me, the guy at the front said "Write down the following..." and proceeded to read out some kind of list:

I looked at my desk. I had been provided with a pen, but no paper! What was I expected to do here? I looked around the room. Some of my fellow 'competitors' had produced notebooks from pockets. Others who (like me) had brought no suitable pad were writing on their arms, the table, and in one case (I was shocked to see) even the chessboard! But what were they writing? Nobody looked entirely confident.

Then after about six minutes, one guy got up and just left - clearly he'd had enough. I was thinking about leaving myself but figured if I stayed put and saw this whole thing through I might at least learn what had been expected of me when time was up.

Once ten minutes had elapsed, the guy with the clipboard told us to stop writing. Then he thanked us for coming, told us our services were not required, and invited us to head home! I sat in my seat a little longer, somewhat shocked and confused, but eventually joined the departing crowd, who were all clearly as bewildered as I was.

What on earth was that all about?!

Building on samm82's answer, and fixing the French fashion designer answer as Enigma said, you get

you can see the letters CIA in the top line (seperated by other letters).

Removing every other letter reveals

i.e. the solution is

The letters you take are the white squares

This answer was a group effort between @Graylocke, @berkeleybross, and myself, with a little confirmation from @Enigma, so I'm more than happy to make this a community wiki answer (unless there are any objections or @Stiv wants the +2 rep for accepting XD).

The answers to the questions:

Noticing that there are 16 answers with 4 letters each, 16*4=64 letters. Writing these on the chessboard (like the shocking participant) starting on the left and writing the first eight downwards, then dropping down and repeating the process gives us:

This corresponds to the board, as seen by removing all the letters that don't correspond to chess pieces (counting "P" as a pawn):

@Graylocke noticed that "CIA" was present in their answer (with the answers arranged on the board differently). This prompted @berkeleybross to remove every other letter from the grid, who realized that you keep only the letters on white spaces, you get the following, which parses to "CIA HIRING LEAVE ROOM TO SHOW INTEREST."

What you should have done is

leave the room, following the lead of the other guy.

I don't know if this is the right answer, but it seems... plausible?

If you answer all the questions given, you get 16 4-letter words:
CAGE, KYIV, IDLE, BRIE, ABLE, DIOR, HEAT, UNDO, ODIN, USSR, MONK, RHEE, TOTO, PONS, AUDI and SWAT.
What is interesting about this is that 16 * 4 = 64 which is the number of chessboard squares... Suspicious that at least one person in the room was writing on the chessboard itself!

Which is ripe for a Chessboard Cipher using the pieces as placed on it (capitalised above).

What does this mean?

Well... the bottom "CIA" is interesting enough! But if you run the capitalised letters through an anagram finder, I come up with "CODE I: ABORT TASK" which may or may not be the intended message.
What is clear is that this event was an excuse to send a message to someone. Probably the same someone who scribbled on the chessboard and then left after 6 minutes (far quicker than it took me!)

Explanatory 'showcase' answer provided by OP: All three of the existing answers here made great contributions to solving the puzzle (@Graylocke, @samm82, and @berkeleybross - to whom I have awarded the checkmark for being first to find the final answer), but none of them quite described the intended solution path in full (without making any assumptions), which for interest and completeness I present here...

Clearly the first thing to do is solve the 16 clues - everybody worked that out :) But what are the answers? Some of them look like they could be ambiguous...

For instance, 'French, soft, creamy cheese' could be Brie or Camembert (or other less well known cheeses), and there are several 'Major German automobile manufacturers'...

But there's something noteworthy about all of the clues:

This uniformity suggests that perhaps there is something uniform about the answers too. Specifically:

All of the unambiguous clues seem to lead to answers of precisely four letters. So perhaps all of the clues should do so.

But at this stage we're still not sure which of the major German automobile manufacturers is the intended one - both AUDI and OPEL can fit. We clearly need to find a way to disambiguate this. So what else do we have in the puzzle?

Well, very prominently, we have the chessboard. Moreover, in the text there is mention of one of the attendees writing on the chessboard. And 16 answers of 4 letters makes 64 letters in total - is it a leap of logic too far to suggest that we should assign one letter to each square of the chessboard?

How should we do this? The only perceivable further hint here is that:

The chessboard has a specific arrangement of pieces upon it. Furthermore, in ordinary chess algebraic notation each piece is represented by an initial: K for King, Q for Queen, R for Rook, B for Bishop, and N for Knight (as K is already assigned to the King). Traditionally in this system, pawns are indicated by the absence of a letter. However, in the old descriptive notation system which it superseded altogether at the start of the 1980s, Pawns are indicated by P.

So what does the chessboard look like if we make use of these? This:

Counting up the letters here and in the answer shows an exact one-to-one correspondence of K's, R's, B's, N's and P's (there are no Q's) - if we use OPEL instead of AUDI.

This now suggests a strategy:

We should fill the board as far as possible as we can using words that can only fit in one position. As per a regular crossword it makes sense to attempt this using a straight-line arrangement in the first place and see if this gets us anywhere (rather than, e.g., the adjacent-letter approach of a Boggle grid) - especially as thus far there has been a sense of uniformity to the puzzle, with its four-word clues and four-letter answers.

KIEV, MONK and PONS (only one possible place):

BRIE and ODIN (now only one possible place):

ABEL, UNDO, RHEE and OPEL (knowing that for an exact fit, each letter is used only once):

This is as far as we can go without ambiguity. And it's at this point we can spot a solid pattern:

So far, all of our clues have been written vertically downwards onto the chessboard, either fully in the top half or fully in the bottom half: 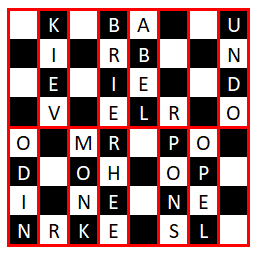 The only legal way to arrange the remaining words in the board is to fill them out likewise. What's more, we can see that if we consider first the top tier of words, then the second, left to right, the answers entered so far appear in the same order as their questions appeared in the list - and DIOR and USSR are in appropriate positions to satisfy the two remaining R's on the board...

So let's enter the remaining answers according to the same system to produce the final grid:

What do we now? Well, likely we're looking for a final message concealed within the completed grid. And a little trial and error leads us to a solution:

If we only read the white squares on the grid, the message is revealed! CIA HIRING. LEAVE ROOM TO SHOW INTEREST.

(NB This works only if KIEV is used instead of KYIV, another possible spelling of the capital city of Ukraine - if we had worked with KYIV from the start instead, we would be able to disambiguate that at this point, as 'HIRING' is a real word while 'HYRING' isn't...)

So it appears that:

This whole scenario is actually a CIA hiring event! And anybody who managed to find the message should have left the room early to express interest in taking up the offer, having demonstrated their ability to interpret the chessboard cipher. No doubt there would have been somebody stationed outside the room to intercept anyone leaving and clarify their intentions (the CIA don't just want to go recruiting folks who are nipping out for a toilet break after all!).

Of course, within the puzzle we never worked out any of this, so we go about our daily business none the wiser, a little puzzled but oblivious to the opportunity we just missed out on. Meanwhile, the chap who did leave early - likely the same person who was writing directly on the chessboard - is on his way to becoming a CIA operative!

21
Detectives vs Nelson: The Chessboard Serial Killer
20
Away from the hub
5
What crime is Shay D. Guy commiting?
91
Do I Work with an Orangutan?
7
What Was Their Name That Person?
18
Reconstructing A Chess Game #1
32
"Murder!", said the knight
6
The Alchemist leaves a trail
23
The Ultimate Chess Strategy
26
File Extensions