Intended for Fortnightly Topic Challenge #47: Wacky Sudokus, but I was too slow making it... not for lack of trying, I assure you

This puzzle is both* a Pentominous and a Sudoku**. 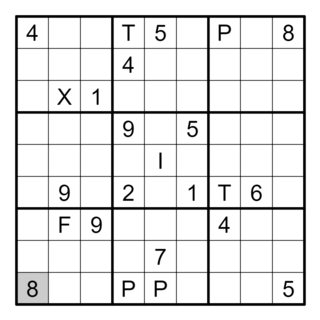 I found it easiest to solve this puzzle using two separate, side-by-side grids. Here is a picture to do that on. Click-through for a version of the image with the labeled pentominoes removed. 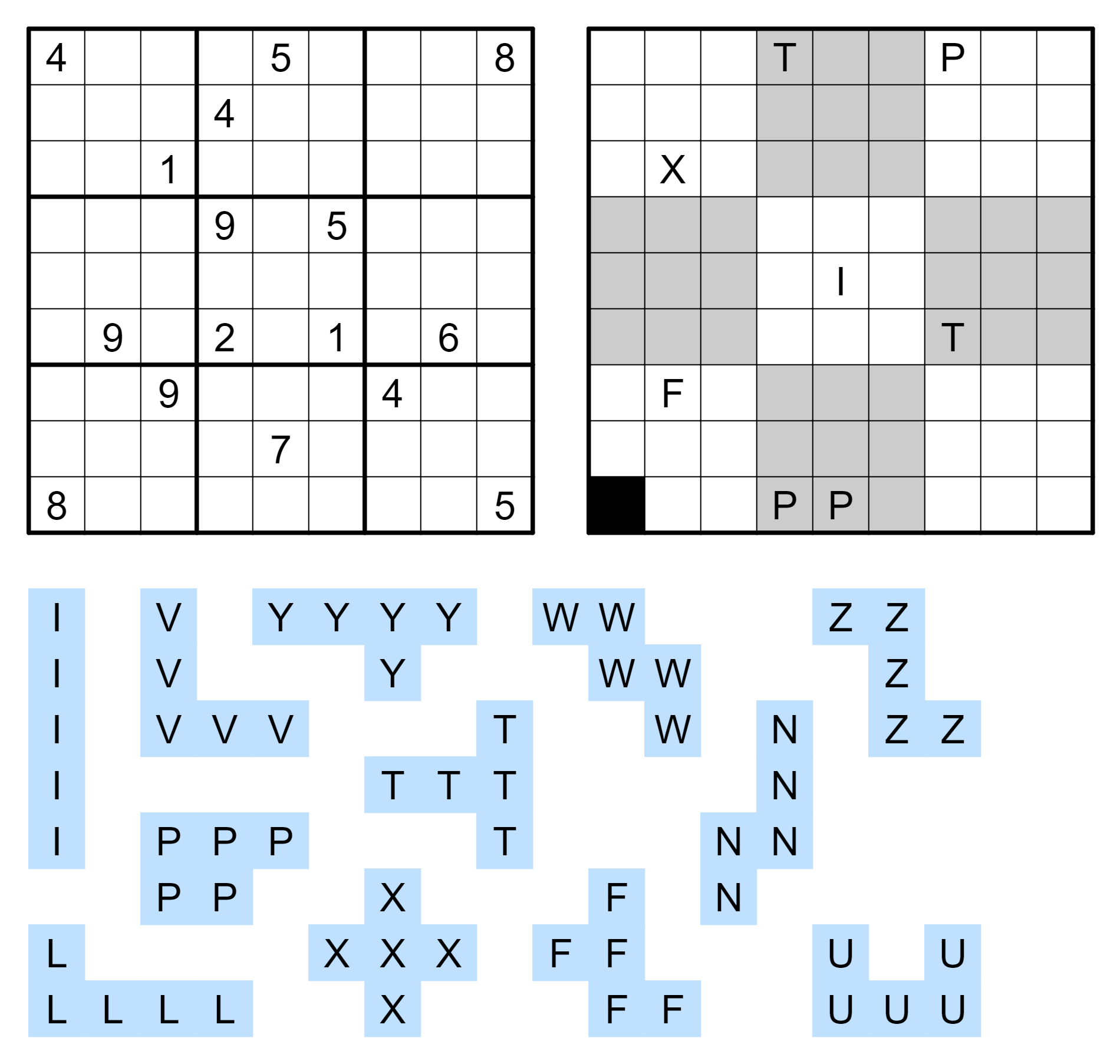 Here are the spellings that this puzzle uses for the digits, with pentominoes uppercased:

For your convenience, here are links to Penpa solvers: with pentominoes, without pentominoes.

* I've never made either before, so my insistence on combining the genres makes perfect sense. Yes. I'm perfectly normal. Why do you ask?

** The Sudoku was supposed to have a symmetrical clue layout. Um... oops. 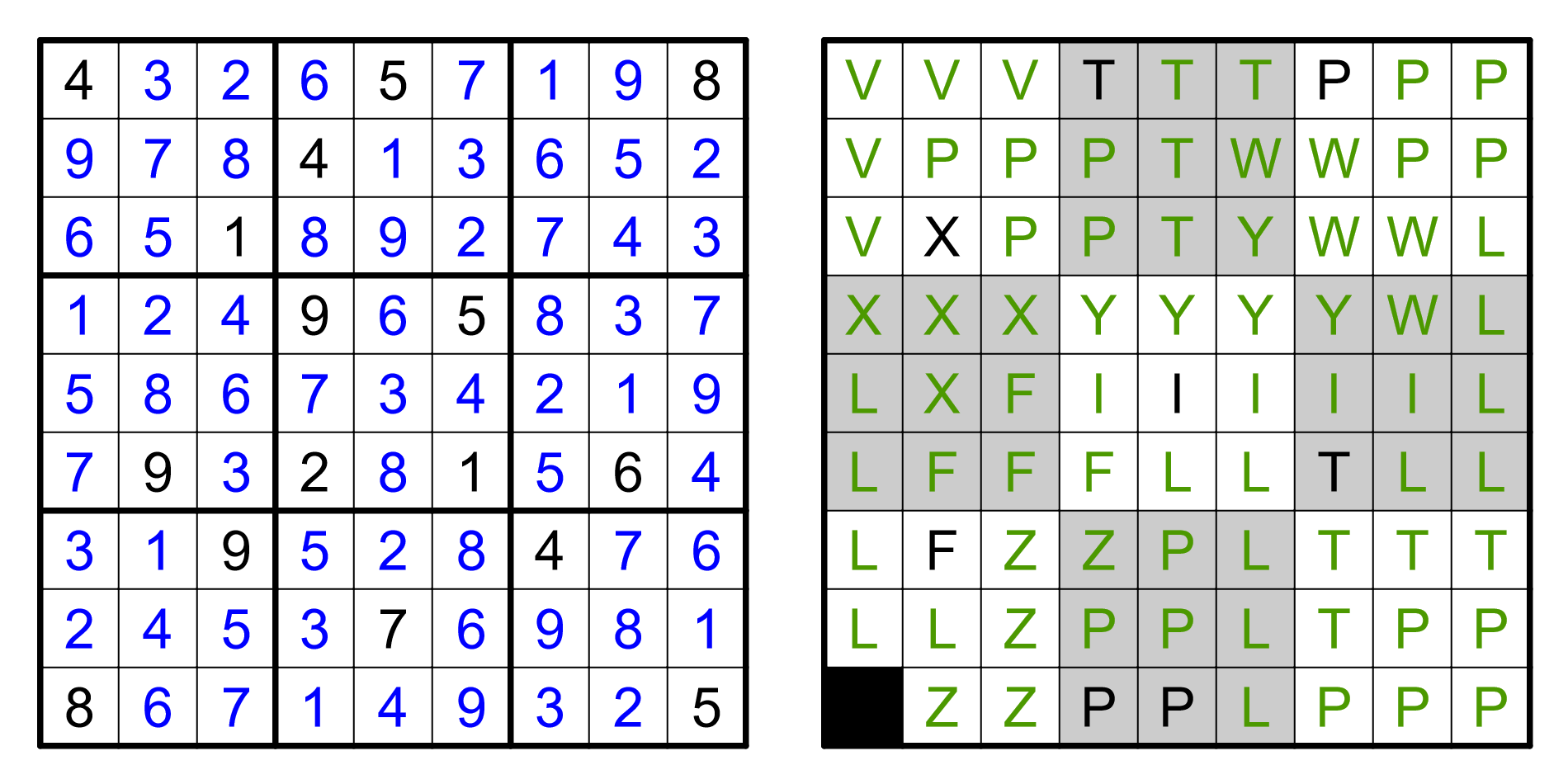 I pentominoes are special, since they must lie in a single row or column, and can only contain the digits 1,2,3,4,7...therefore it must contain each once. Look at the middle column of the center box. The I in the middle square allows only 3 or 4 in this box. Sudoku rules force the square above it to be limited to 3468, and the square below it to 348. In particular, one of these squares must be either 6 or 8. Since a vertically placed I must contain the 7, and cannot start in R9 since R9C5 is already a P, a vertically placed I here must contain all three squares of the center column of the middle square. But one of these is either a 6 or 8, a contradiction. Thus the I must lay horizontally in row 5. 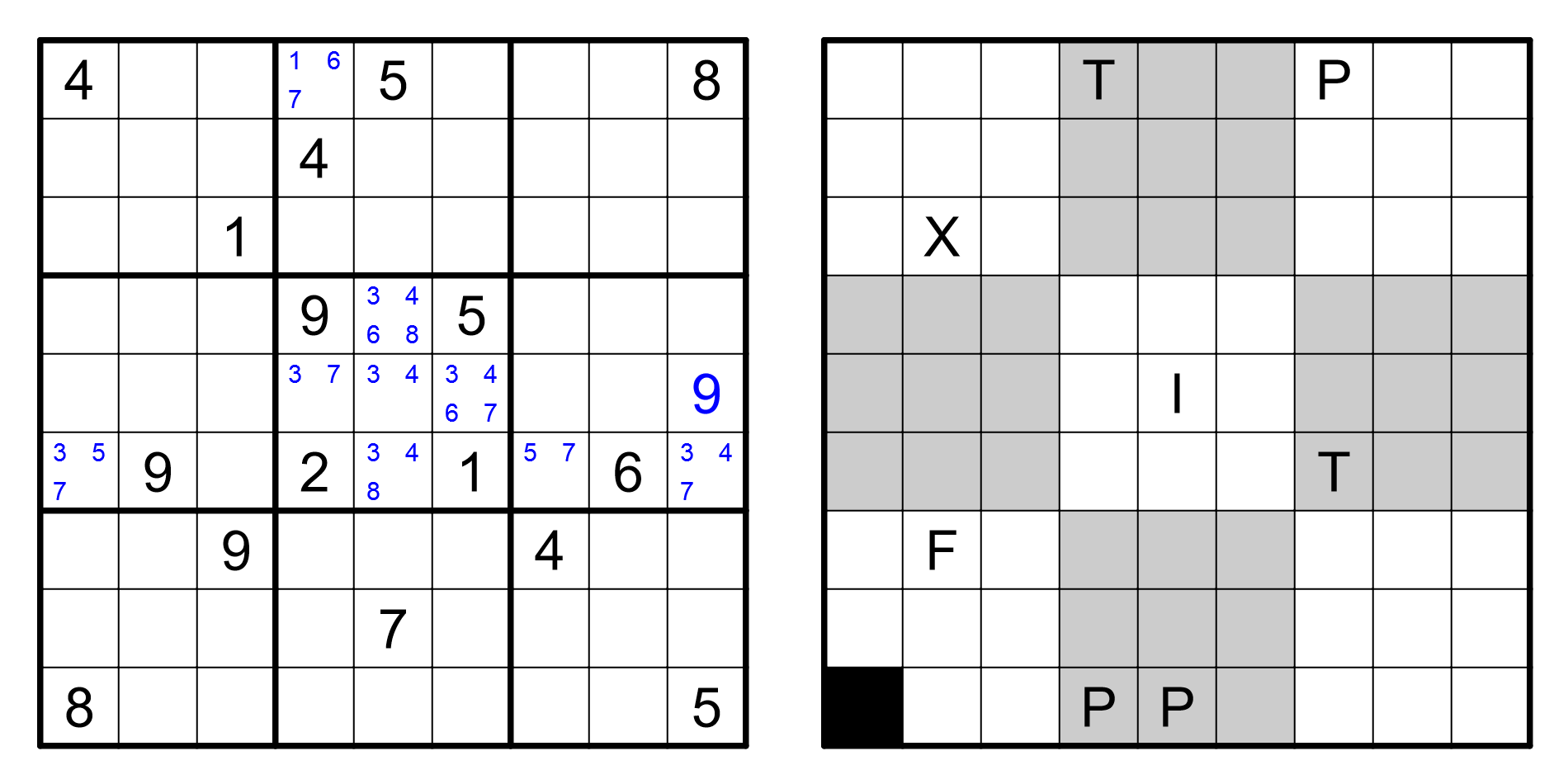 Looking at the X: 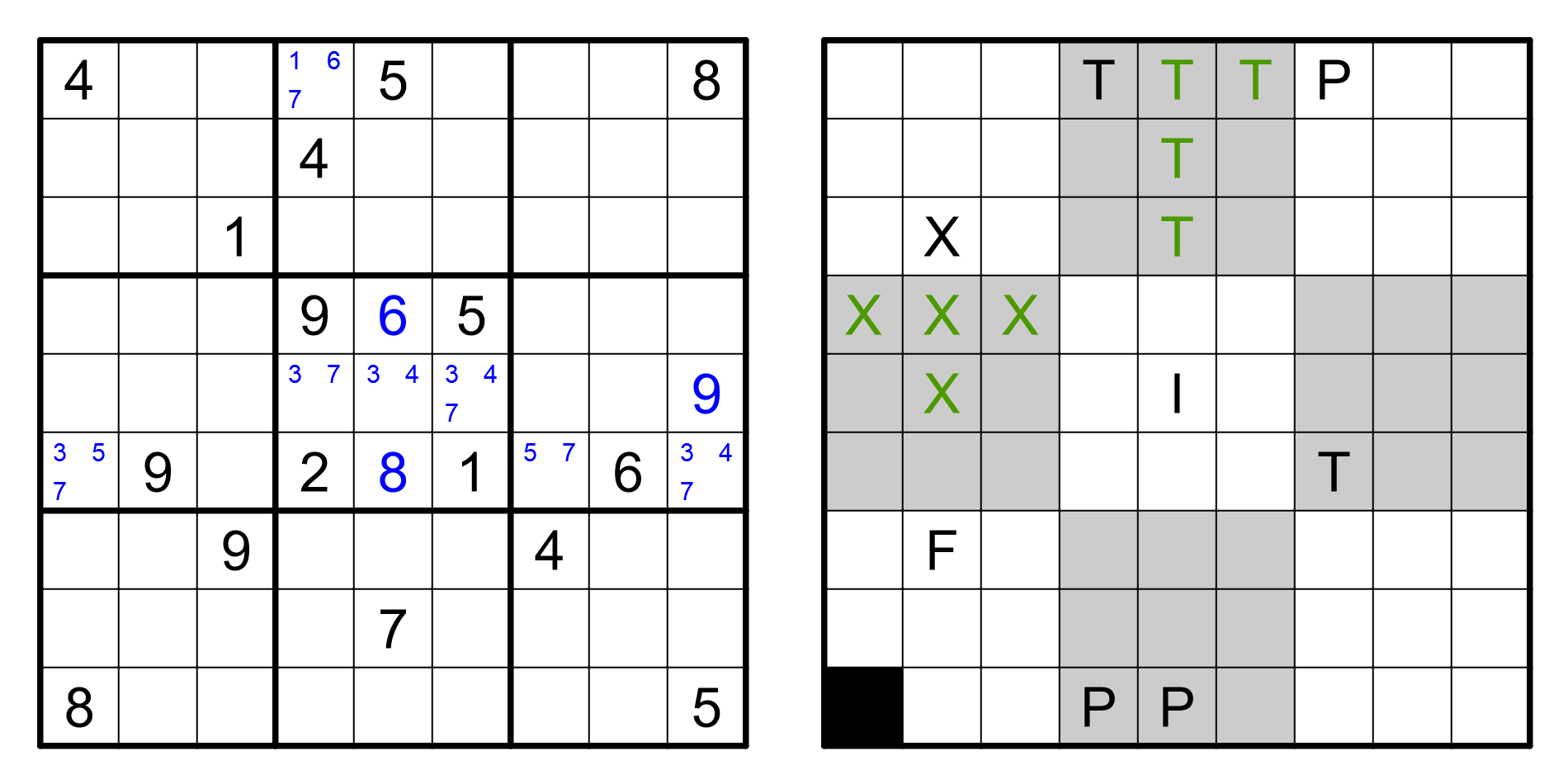 Some more logic in the upper left:

Notice that there are 10 cells uncovered by pentominoes in the upper left, with only the single egress between the X and T. This means no pentomino can bridge this gap, so there must be two pentominoes that cover these 10 cells. The pentomino containing R3C1 cannot avoid R1, for it would isolate a group of at most 3 cells in this row. And once this pentomino meets row 1, it has to contain a contiguous row of cells from column 1 in row 1, since anything not covered would be isolated. So the only possibilities for this pentomino are T (pointing right), P (in the P orientation), or V (open to the bottom right). T would isolate 2 cells in row 1, and P would forces the other pentomino in this area to be an adjacent P as well, so we must have and V, and thus a P. 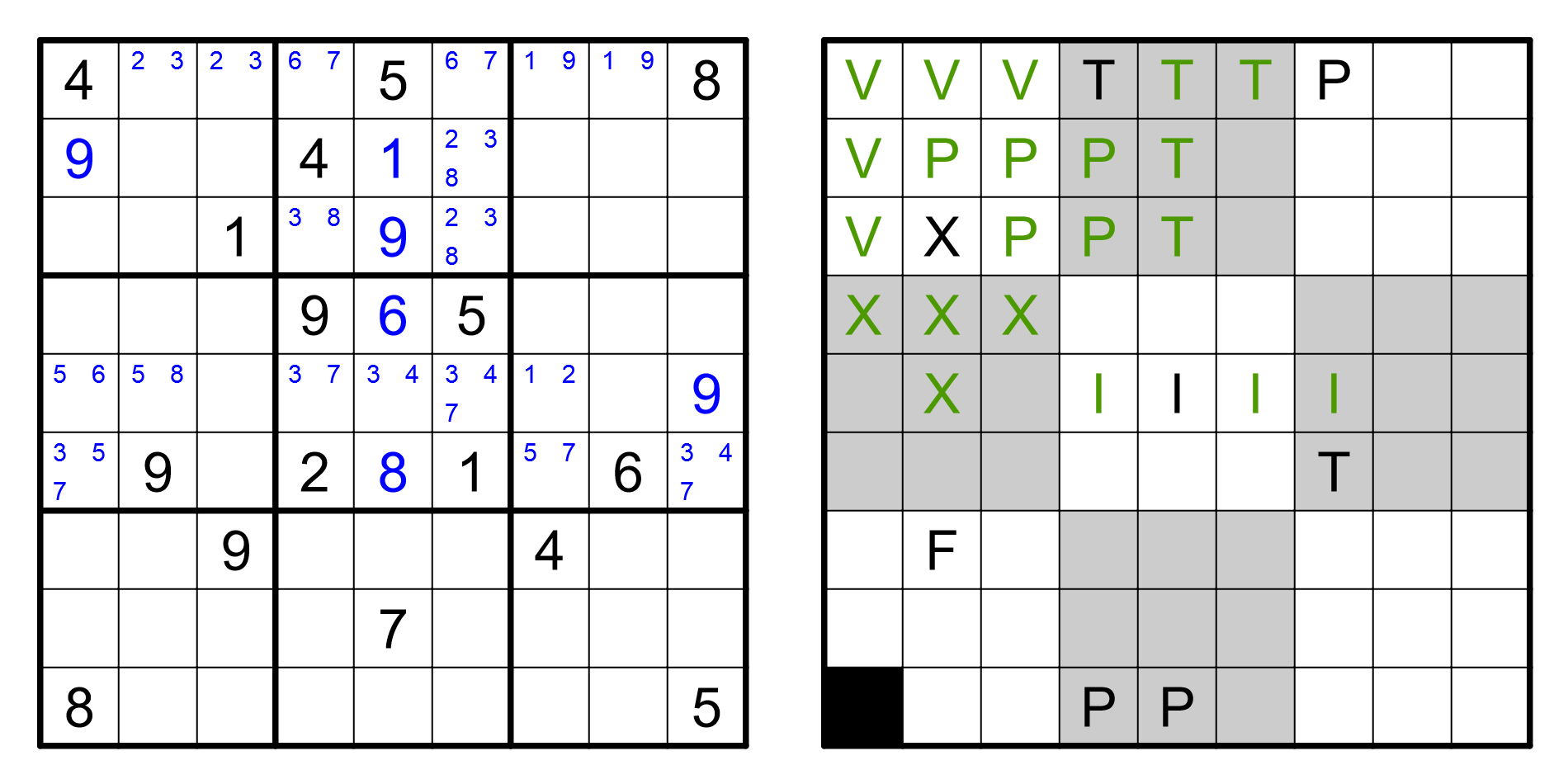 The pentomino on R4C4: 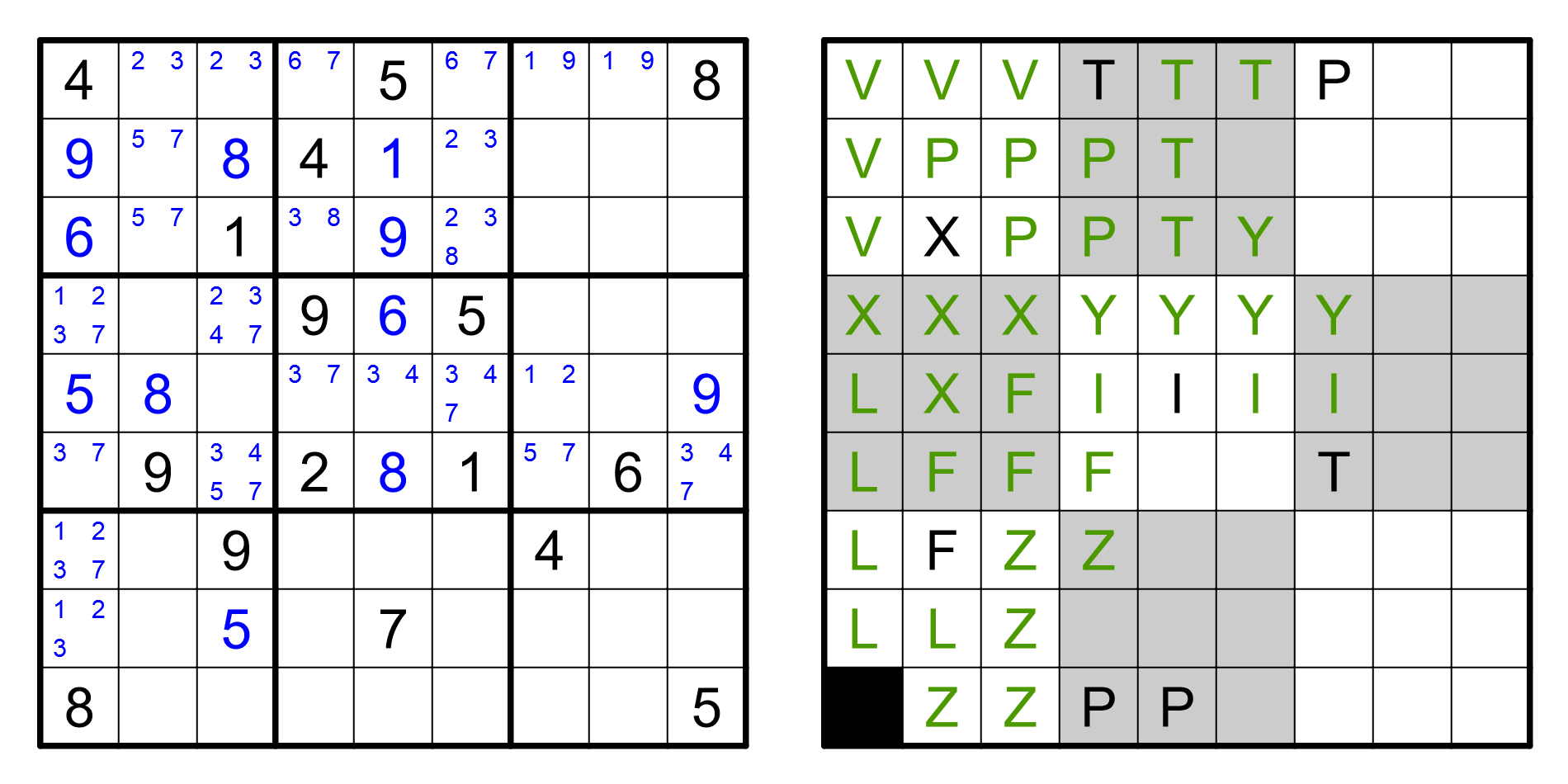 Note R8C4-5 must also be in the P. The P cannot extend to R8C6, for it would force a P directly above it. Similarly, it cannot extend to R9C6, as again a P would be forced above, with tail in either R8C6 or R7C7. So the P must extend up to R7C5. Now, the pentomino on R6C5 extends to R6C6. It cannot join the T, since it contains an 8, so it must extend down to R7C6. This leaves only two orientations for the T, pointing down or pointing right, and the pointing down orientation forces 12 uncovered squares needing to be covered by pentominoes. So it must point right, forcing an L and P beneath it. The I extends to R5C8. The shape above the T cannot be a U, since that would leave no place for a 4 in the middle right square, so it must be an L. The rest of the pentominous falls. The grid thus far: 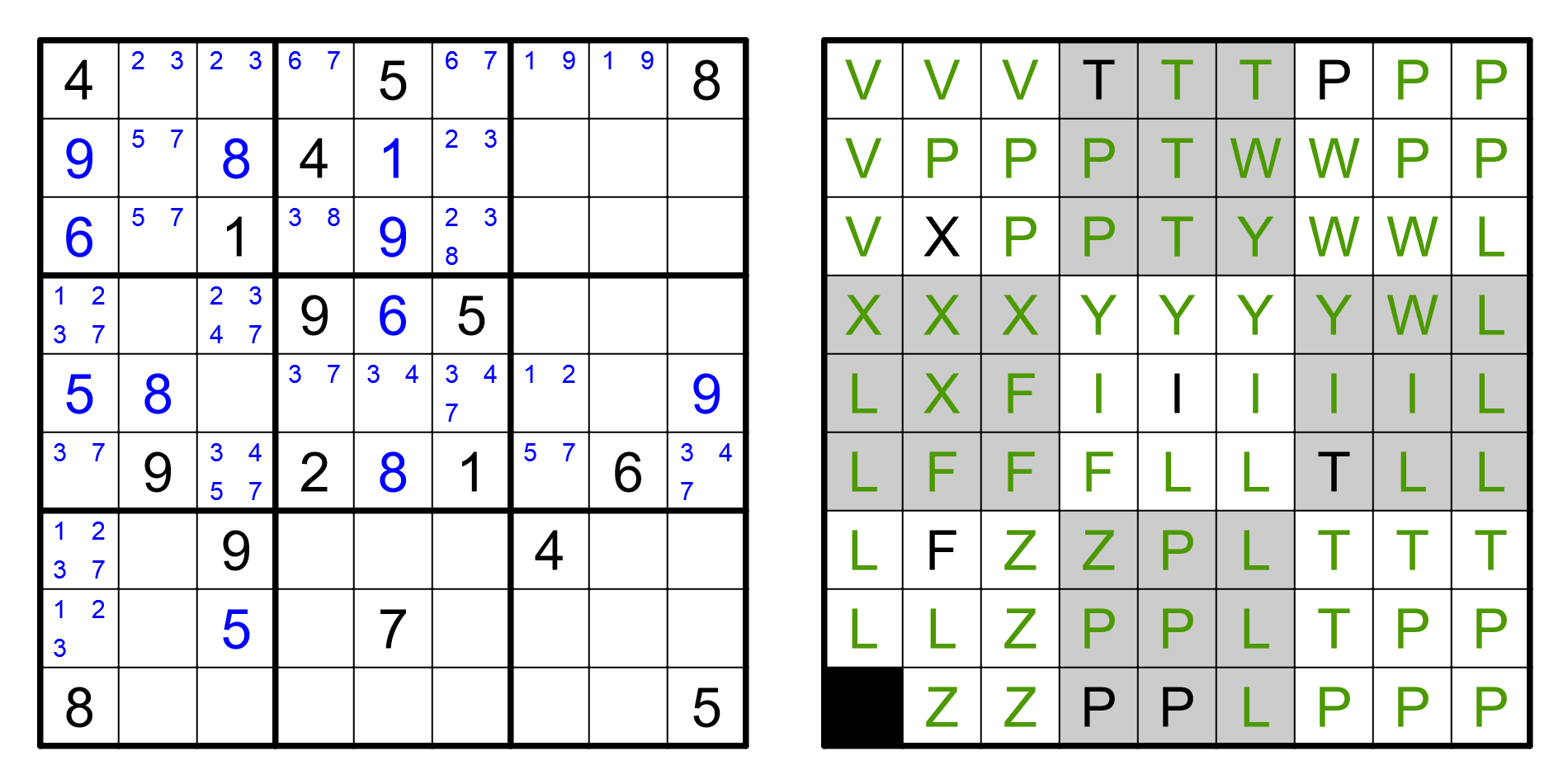 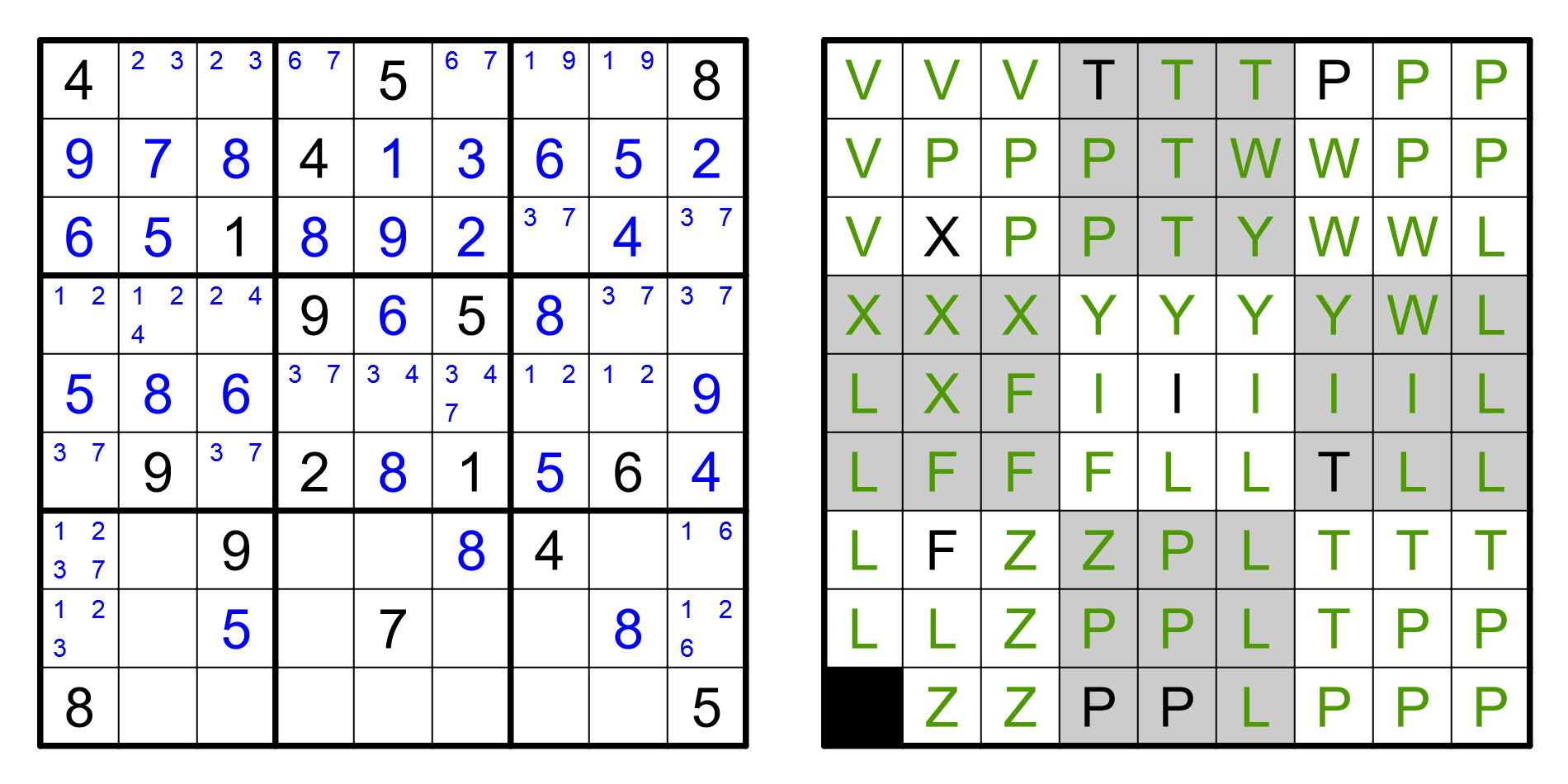 Continuing in the lower right:

Because R7-8C9 are 1 and 6, R7C8 cannot be 1, and it cannot be 2 or 3 because it contains a T. 9 is also excluded, so we must have a 7 here. This forces the 3s and 7s in the upper right and middle right squares, as well as setting R9C3=7. This leaves only one place for 7 in column 1, causing another cascade of fill-ins. The grid thus far: 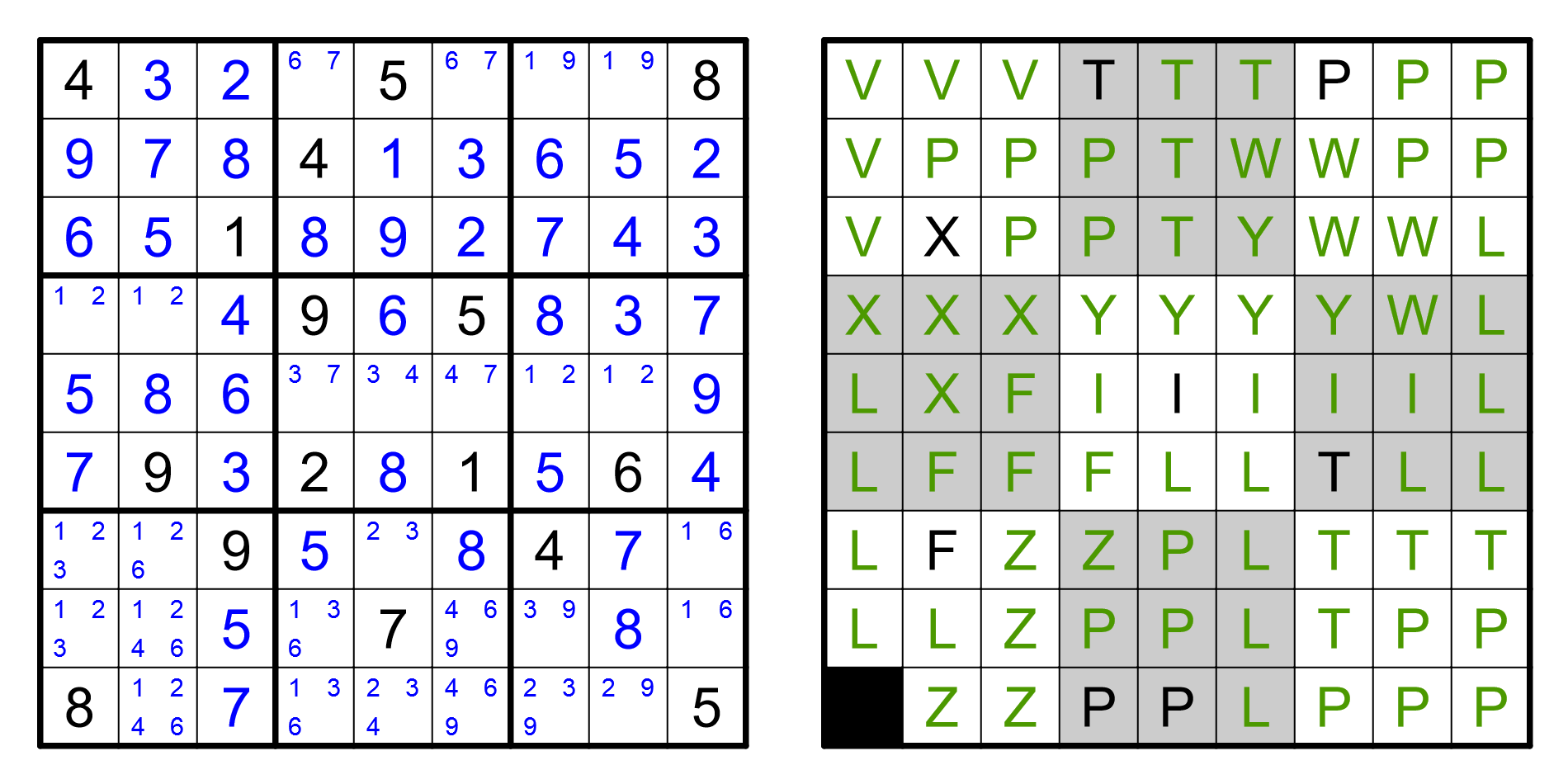