This puzzle consists of three overlapping Sudokus, coloured red, blue and green, so each cell will contain three digits, one of each colour. Taken individually, the digits of each colour will form a Sudoku in the grid. In addition, the coloured Sudokus are mutually orthogonal: for each pair of distinct colours A and B and each pair of (possibly equal) digits x and y, there is a unique cell containing an A-coloured x and a B-coloured y. An accepted solution will provide the answer as well as the key logical steps needed to reach it. I hope you enjoy! 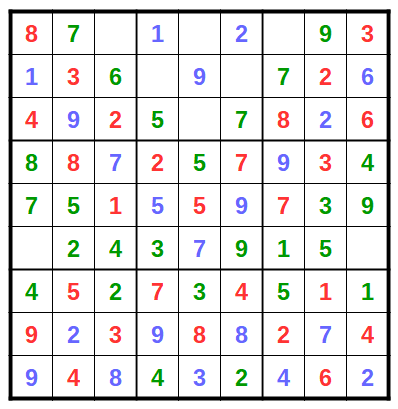 As clued, the individually coloured Sudokus do not have unique solutions; the mutual orthogonality condition is vital to creating a unique solution to the entire puzzle.

Should've known what I'd gotten myself into when starting, whew. Great puzzle! Really hard, but I hope I got everything right.

0th Step: Try to squeeze out everything we can by normal Sudoku first: 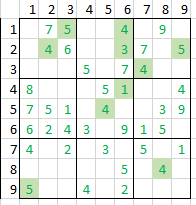 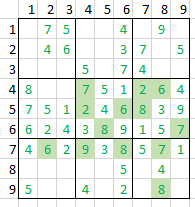 At this point I'm going to leave out the pair listing and reasons, since it gets repetitive. The basic idea is to keep a list of all used pairs and remove possible candidates from a cell if it appears in one of them, after that you can basically apply normal Sudoku on it.
The rest of the green grid can be solved now (but not entirely by Sudoku logic): 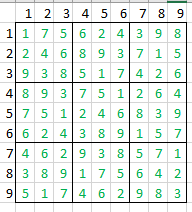 And then also the red one: 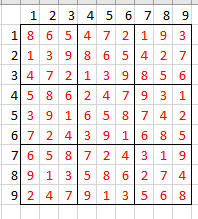 Obviously we now already have a pairing for each blue cell, so we can also finish the blue grid if we just have the patience :) 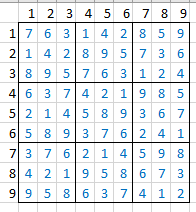 Not the answer you're looking for? Browse other questions tagged logical-deduction visual grid-deduction sudoku or ask your own question.