How to open the lock from this safe?

The figure from below shows a lock mechanism used to store sensitive data microfilms from a certain lab. 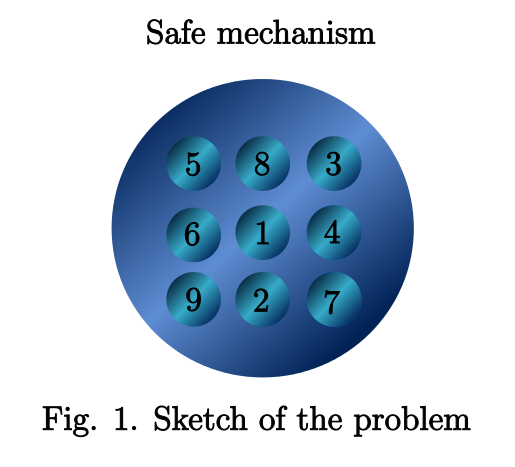 This mechanism is magnetic and consists in numbered buttons which allow them to be moved.

The only valid movements are non-rotating exchanges between two contiguous tiles that are in the same row.

How many exchanges at least must be made so that, considering three-digit numerals row by row, the sum of the two upper rows equals the last row? Assume this way is the only method to open the safe without turning on the alarm.

The alternatives given in my book are as follows:

I'm not very sure on how to approach this puzzle because it seems not possible to be solved, or could it be that am I just missing the obvious?

The 3 and 4 must be together to add up 7. Thus the only other possible choices must be swap the remaining numbers. I believe that the only possible solution (assuming that this problem is wrong) could be:

Thus the answer would be 2 with those pairs being 8 and 5 and 1 and 6. The other part which does seem to be misleading is the meaning of exchanges? Does it account for pairs or individual movements?*

If so that would be 4, in other words taking out 8 and putting it onto the place of 5 and vice-versa.

Is this reasonable or what? Can someone help me here with some sort of strategy? Maybe there's a method or something which could be done.

This was obtained from my Logical games book from 2000s and it seems to be an adaptation from Martin Gardner's Puzzle carnival from 1970s.

It seems like the parameters of the questions are as follows

Not the answer you're looking for? Browse other questions tagged mathematics strategy optimization formation-of-numbers or ask your own question.

0
Find the competition rankings of three people based on their final scores
3
Given pairs of weights find individual values
2
How to find the least amount of helpers required to complete a voyage?
2
Which step is creaky?
0
Move 3 matches to maximize triangles
0
How do you find the perimeter of a set of odd looking squares and triangles?
4
How to get the least number of flips to a plastic chips to get a certain figure?