This is the first Chain Puzzle in the Video Games series, in which all puzzles are themed around video games of all genres. The answer to this puzzle is a thematic word or phrase. The solver whose answer is awarded the green checkmark has the first refusal on the opportunity to create the next puzzle in the series, which must somehow incorporate the answer to this puzzle somewhere within its construction. The solver is under no obligation to create the next puzzle - in the event that the solver does not wish to take up this opportunity, the puzzle's setter may take up the offer of a willing substitute setter or choose to continue the chain themselves.

This puzzle was inspired by the video game Portal by Valve. No knowledge of the game is required for the completion of the puzzle. I would also like to give a massive shout-out and thank you to bobble and Deusovi, who were instrumental to the completion of this puzzle. Deusovi gave a lot of very helpful feedback (as well as checking the legalities of the cryptic clues, and then checking the fixed ones). Bobble ended up writing a majority of the clues because mine were bad and illegal :P. Thank you so much!

You wake up in the middle of a blank, white room, with no knowledge of how you ended up here. Suddenly, you hear a distorted robotic voice coming from above, though you can't discern where exactly it is coming from.

Hello and, again, welcome to the Aperture Science computer-aided enrichment center. We hope your brief detention in the relaxation vault has been a pleasant one. Your specimen has been processed and we are now ready to begin the test proper. Before we start, however, keep in mind that although fun... and learning are the primary goals of all enrichment center activities, serious injuries may occur. The portal will open in three, two, one -

A blue portal opens up in front of you. As you walk through, you are instantly transported out of an orange portal. The portal closes behind you, and you are faced with a giant crossword in front of you. This time, a different distorted voice crackles above you.

Dear Subject,
Greetings, unfortunate test subject! I have been recruited by Laugh-Hyphe to study the intricacies of the human brain. If you wish to escape, you must solve the following cryptic-crossword before you. It is... a bit different than what I presume you are used to. Here are the rules:

An example below is provided: 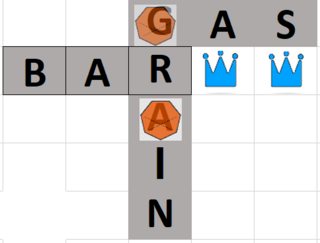 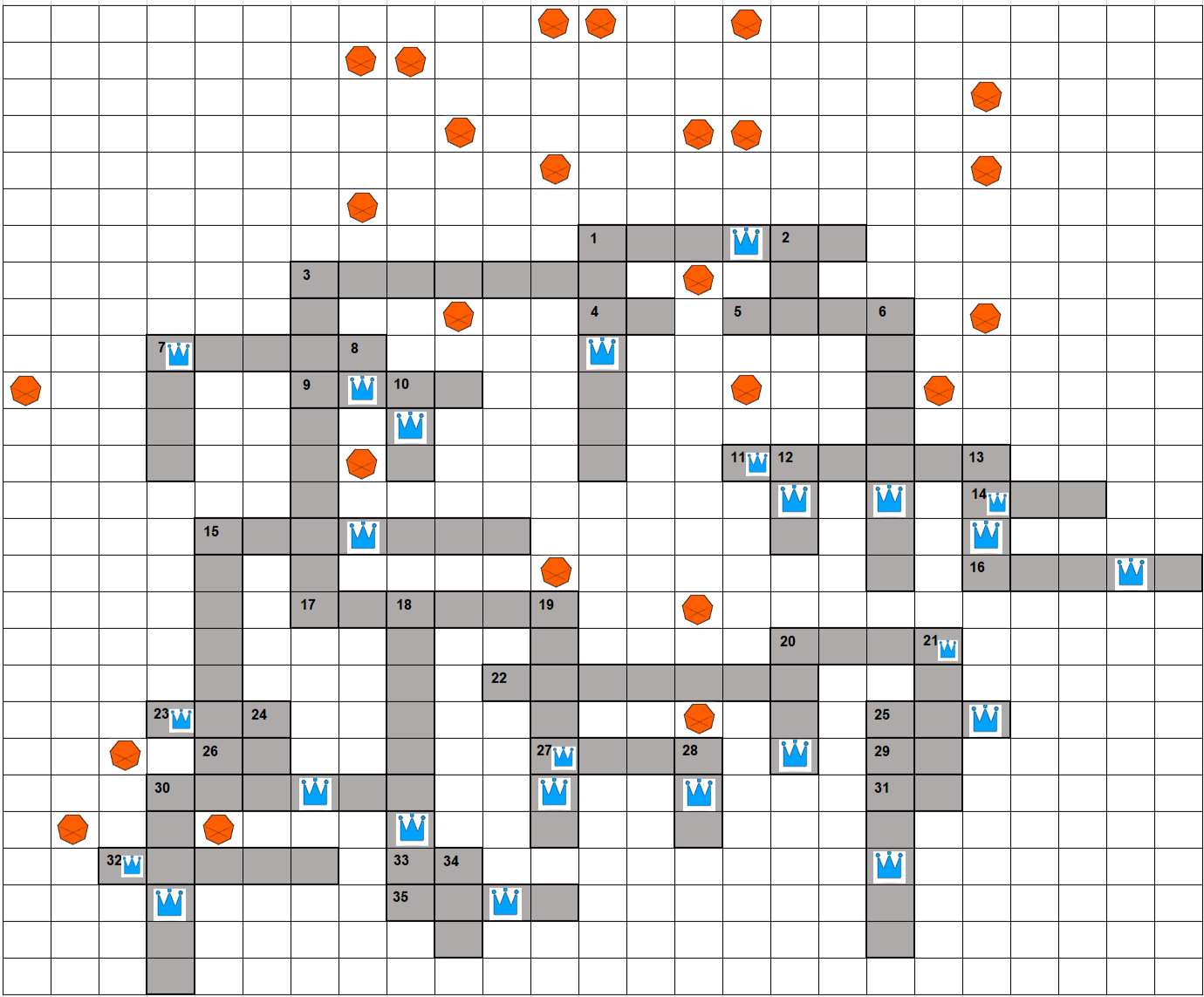 You look up at the ceiling. "Who are you?"
The voice responds cryptically.

Perhaps the better question to ask is... who are you?

Step 1: solving most of the clues (advance warning: there are some errors but I fix them later)

(The post-transformation clues were accidentally slightly out of alphabetical order in the originally posted version of the puzzle. That's since been fixed, but as you'll see my answer uses the labels repeatedly and I'm not going to relabel them all now :-). The labels below match the ones in the spoiler block above, which are no longer the same as the ones in the question. Sorry about that.)

Grid at this point:

At this point it seems like we may make progress faster by figuring out what moves where. I shall allow myself to make extremely plausible guesses rather than looking for watertight proofs. So:

q:TAXOL is clearly made from AXOLOTL. The T at its start is either just a T or is a moved-unit that forms a word on its own. In the latter case it must be (r) although we haven't solved that one yet. I don't see any length-4 units starting with a T (other than TOUR/TRASH which we obviously can't use here), so this is a solo T, from the end of 20d:TORT. After SAG is removed and something is placed to the left of where the G was, we're going to get a short word beginning with T. That can't be TAXOL which we've already found, so on alphabetical grounds this must be (r). So T + a moved-unit will solve this. Aha, we have RAM making r:TRAM (= TRAMP without its last letter). Where does the AG go? It doesn't look like it'll be in d:DRAGOON which we already have a better explanation for, so probably a:AGO or i:MAGI. Actually, i:MAGI is surely MA (from 13d:RAMA) plus 26a:GI, so let's place that. Oh, and actually that will make a:AGO after 23a:VAS and the end of 30d:GOATEE go away, so AG from 10d:SAG must be somewhere else; let's just remember that we have an AG to place and remove it to make way for RAM. Now, what's happening with the O near 32? The only plausible thing I currently see is o:SPOT; we have an SP so let's put that in place; we've used our isolated T, which is too bad because then we'd make f:GET along with o:SPOT. Let's put an isolated T in there, and remember that along with our AG still to place we now have a surplus isolated T to deal with somehow. ... Ah, wait, I've been misunderstanding how this works: I think that when a blue portal has things both to the right and below we are supposed to move just one. (Otherwise 3d is in trouble after the TRASH is taken out.) In that case, we can put TOUR or TAGGER across at the start of TAXOL. (Not TEE, surely needed for c:BALLOTEE; not TED, surely needed for h:LEVANTED.) It can't be TOUR because there's nothing suitable beginning with R; k:RA is the best that's available but then we can't do anything with the A below. So it must be TAGGER with g:GLEAN running downward. (LE from 16a:AISLE. N looks like it must be from the end of 25a:BAN.)

Here's what we have so far; note that there's one 2-letter unit removed but not yet replaced. (Drat; I notice that there's also the first letter of one word that I accidentally removed in error; please ignore.) 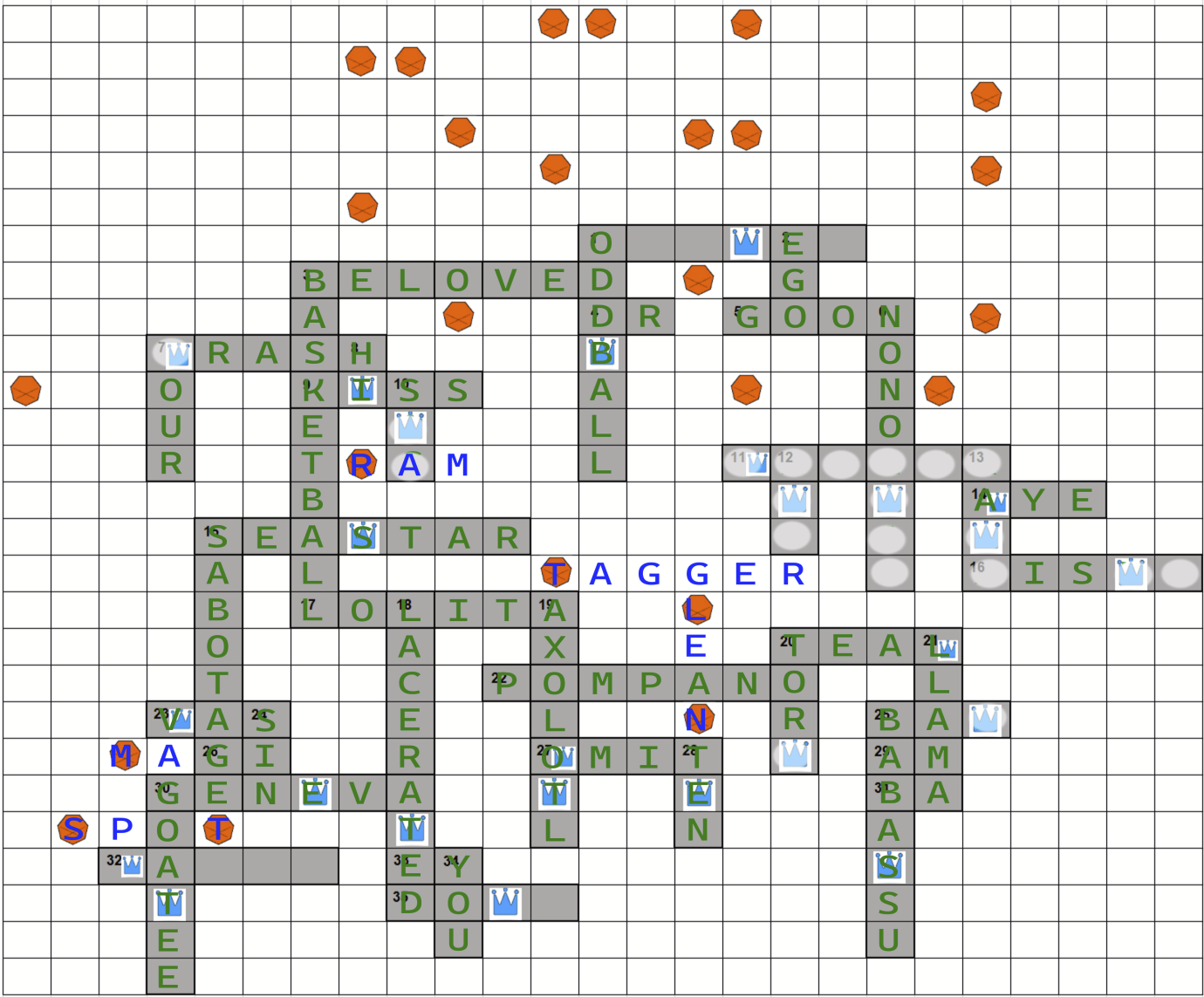 I bet c:BALLOTEE is BALL from 1d:ODDBALL + O in the middle of 3a:BELOVED + TEE from 30d:GOATEE. I can't place that until I've got ISS from 9a:KISS out of the way. That's got to be part of m:SISSY. I don't see suitable S or Y already in the grid, so I think this has to be up at the top where we have orange portals @@..@. Let's move ISS from 9a:KISS there, and place BALLOTEE as already discussed. To the left of there, I notice a fine spot for p:STAR/TL/E, so let's put that in, using STAR from 16a:SEASTAR and TL from 19d:AXOLOTL. Hmm, I think I've made at least one misstep here, because I don't see what I can do to the right of that S -- SOLI is the only candidate and I don't see where I have an OLI to move. I'm also having trouble seeing how I'm ever going to make VERITABLE. Still, let's proceed, and figure out later what will need undoing. Ah, well, at any rate I see where LEVANTED must go: across the second N of 6d:NONOGRAM. The L will be from the orange portal above and left; and EVA and TED will go horizontally. So what about the L? It must come from a piece that has L in its fourth place. I don't have any such piece yet -- it must be 32a, which is now -A-L-. (That A will make DRAGOON work, too.) Obviously the first letter is L ("the French" -> LA) so LA-L-. Darn: I don't see anything other than LADLE and LAXLY, neither of which seems to work. Oh, maybe "the French" comes at the end so it's -A-LE or -A-LA? Maybe TAB+LE (as in "keep tabs on") though that seems a little iffy. Well, let's go with it. [OP has kindly explained to me elsewhere that it's "check" as in the thing you call for at the end of a meal in a restaurant -- if you're in the USA. Here in the UK we call it the "bill", which is my excuse for not thinking of that :-).]

Here's where we stand now; note that we have a 2-letter unit still to place, and that I believe I have been a little too eager to make guesses near the top and will likely have to retract at least one of them.

Ooh. I bet that TABLE is going to be the end of s:VERITABLE, which gives us a good place to put j:VOMIT too. Do we have a VER? We do if it's at the end of 1a, which must then be O-IVER. Aha, "Twist" doesn't mean what you think it does: OLIVER. (-m)OR(-e) around LIVE. Nice. It looks as if n:SOLI is going to go here, except that we don't seem to have any post-transformation words ending in SE. Never mind, figure that out later. Where's (e) going to go once we solve it? I think it has to be at top right where we have 2+4+2+E. I bet it ends in AGE using that still-pending AG. Oh! It must be EN/TOUR/AG/E: ENRAGE about OUT*.

So now we have this; there's no longer a pending 2-letter insertion, but I still suspect there are some premature guesses. 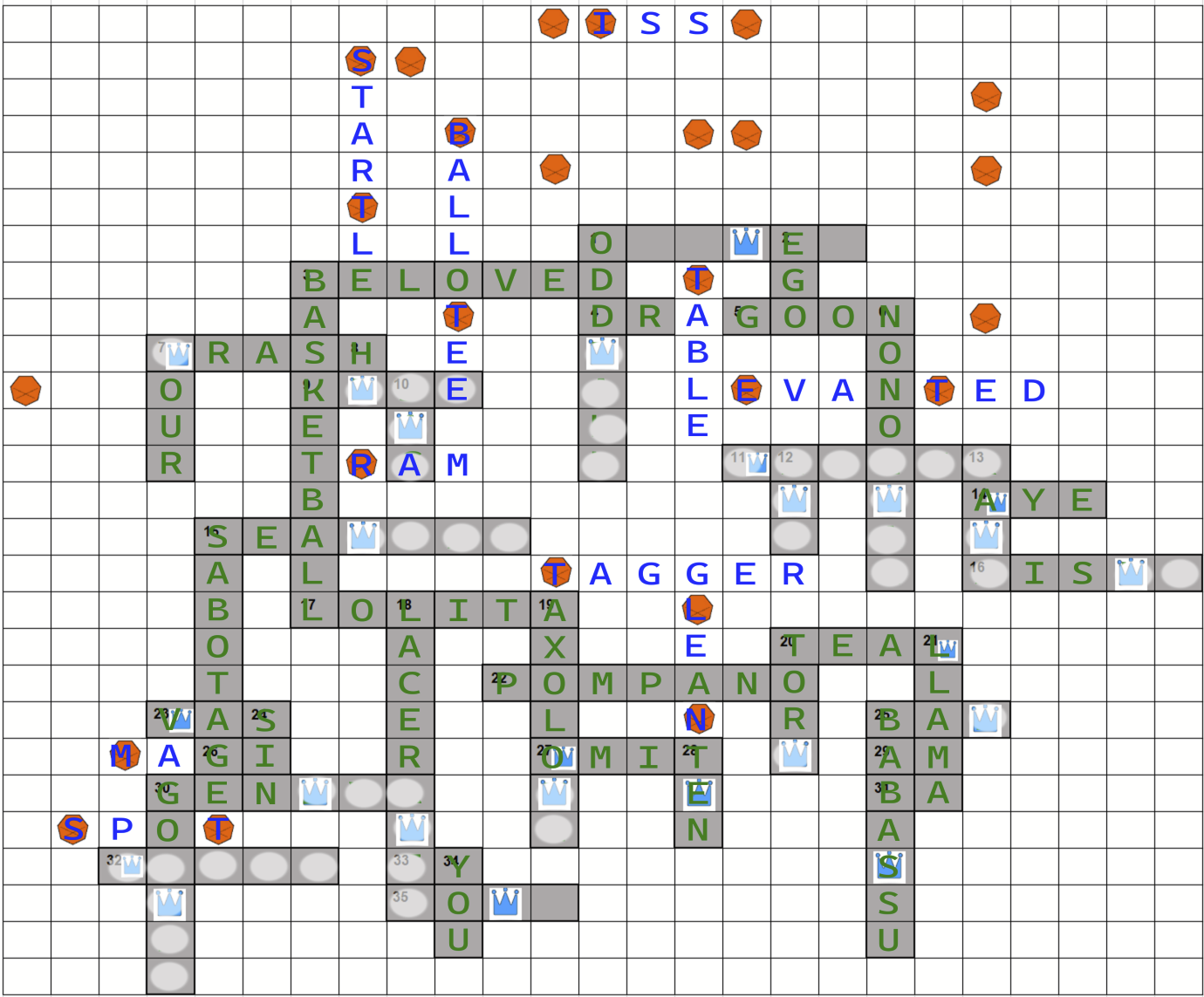 to put A/SSU/ME somewhere. Where's the ME coming from? Ah, it must be from the end of 35a which we haven't solved yet. DOME: D+EMO<. That's got to be up at the top where I currently have ISS and, aha, ISS is actually going to go to the left of that and use the Y from 14a:AYE. We're almost done; what's left? Ah, duh, I'm a moron; (l) isn't RUN which not only doesn't have comprehensible wordplay but is the wrong length, it's VASE (SAVE*). I was confused because it's out of alphabetical order. And that's it, apart from the isolated orange portal at the left, which I guess gets 21d:LLAMA entire making k:RA. 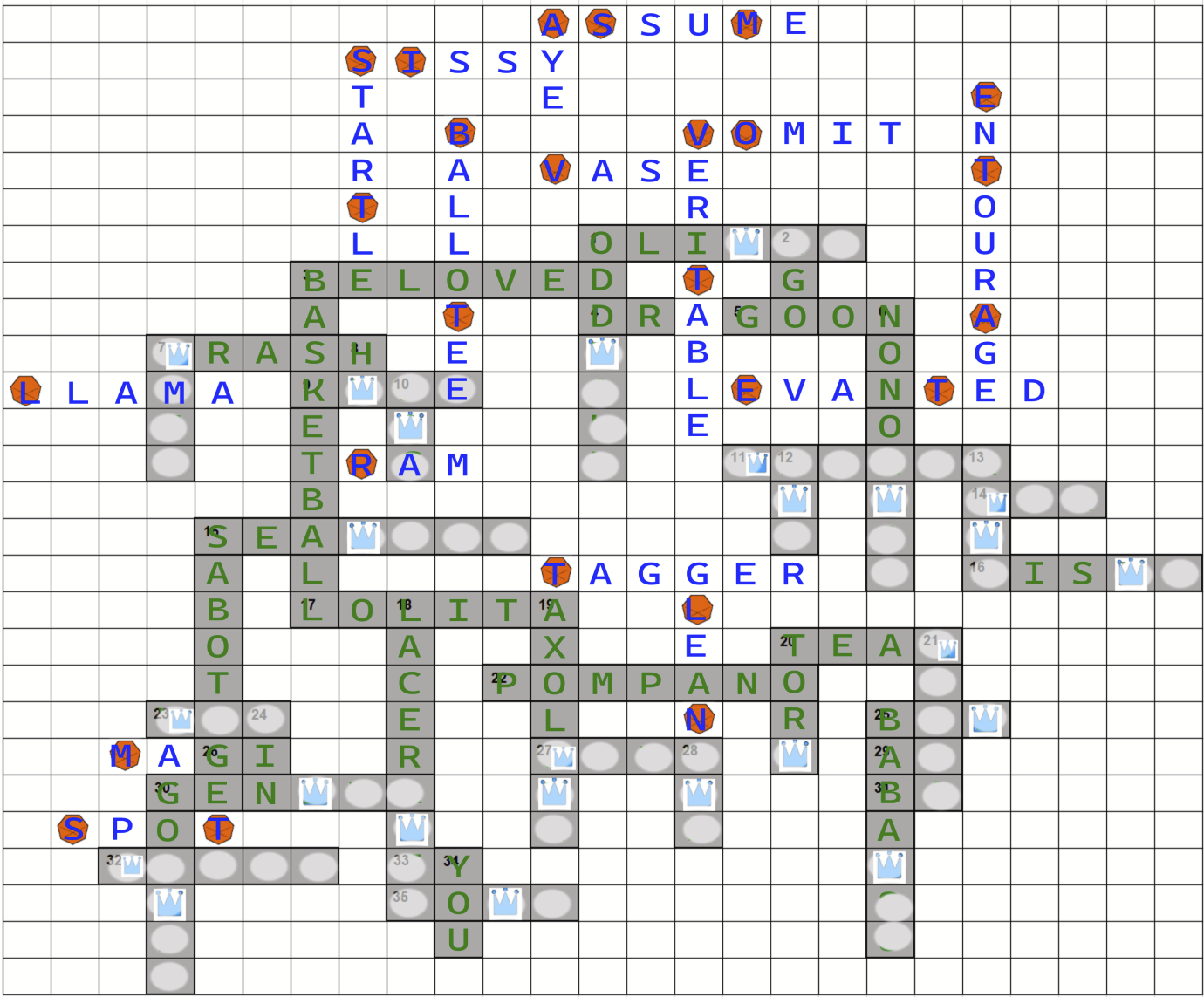 With the blank spaces made a bit more blank, and also with one answer (the second-last to be entered) flipped from the wrong orientation I'd put it in with, duh: 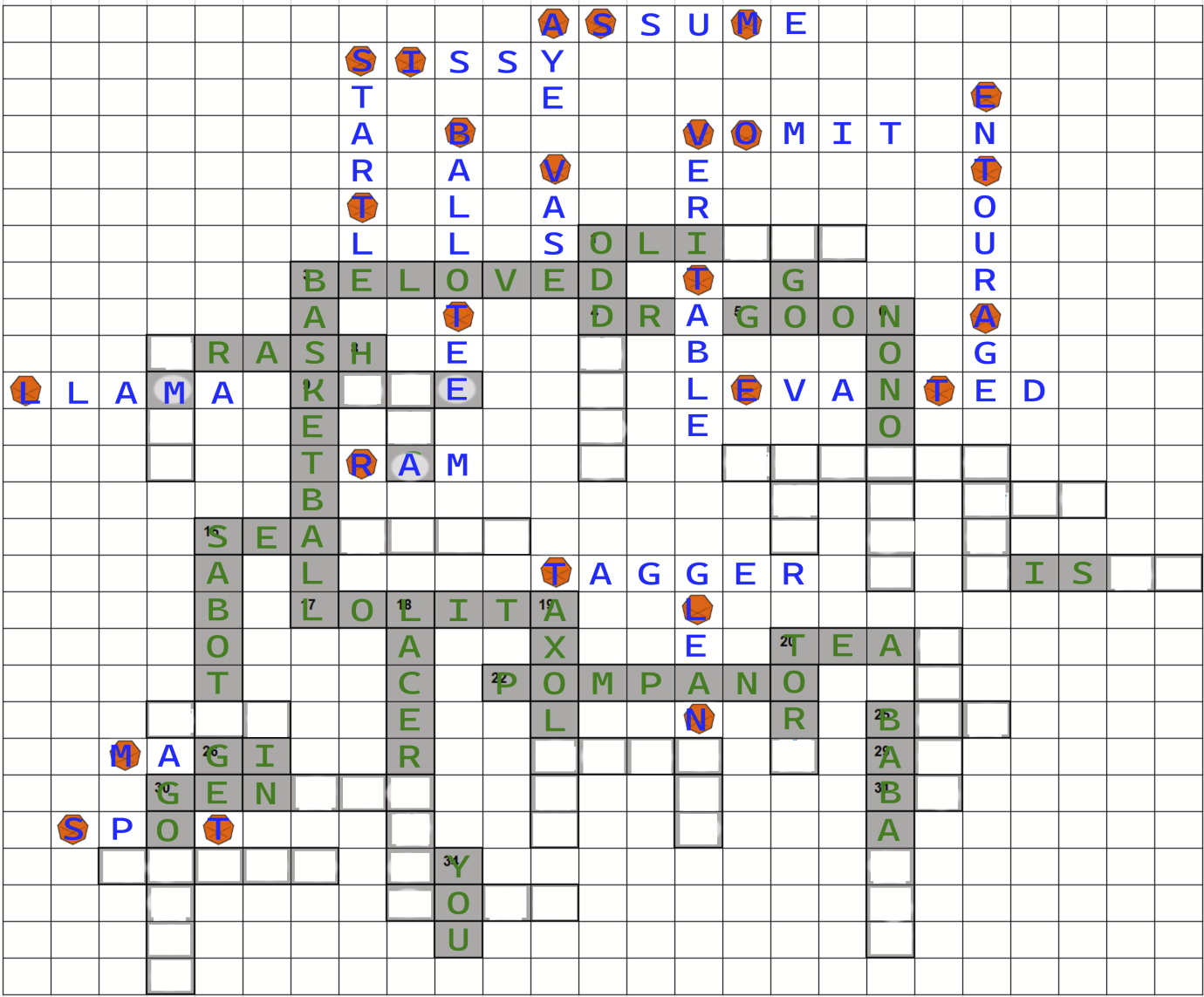 Finally, we have the mysterious entity's question, which is answered

by the isolated words: BABA IS YOU. (The name of another puzzly computer game.)

Not the answer you're looking for? Browse other questions tagged logical-deduction knowledge cryptic-crosswords video-games or ask your own question.