This is an infinite cryptic crossword. Solve the clues and use the four given grid pieces (each duplicated infinity times) to create a grid that continues endlessly in all directions.

Down
A1. Muslims initially request face covering
A2. Flying cars in Australian city
A3. One thousand milk products served up? That's a lot
A4. I moved to northernmost extreme in French territory to identify lizard
B1. Ultimately, Francis is not someone to be revered
B2. Harm evil entity with gas
B4. "The Living Daylights" – group of antagonists hunting agents' heads (hyph.)
B7. Radical extremists in Zimbabwe supported by many
C3. The unstable Yankee left compound
C4. Just retired, actor Irons undressed
C5. Pause speech for recovery
C6. A stand-up storyteller from Greece
D1. Former lover, according to a friend of Barney Stinson's, is upset
D2. Labourer and I escaped upcoming infernos
D4. Pianist Tatum's music?

The answers to the clues are:

The grids tessellate like so (the black image is the original four squares and then the red image shows how it lays alongside itself): 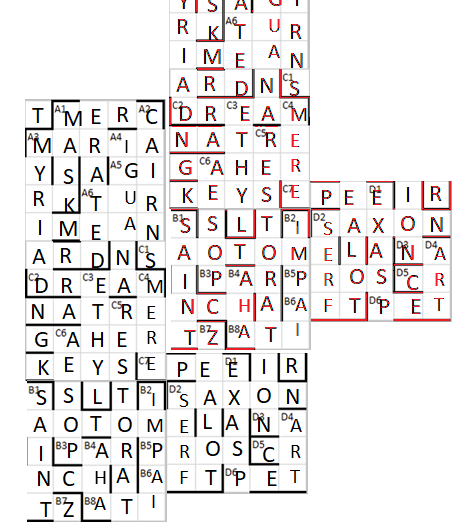