This is the fourth and final puzzle in a sequence, coming after Not Bluebeard's Castle, Oops! All Acros--, and In Any Case.... The sequence is themed after a certain set of works, revealed in the first puzzle. No knowledge of the works in question is necessary to solve this puzzle, though it may make some parts slightly easier. It is necessary to have solved those three puzzles before this one.

Try to remember now… how did it all begin?

To solve the Down clues, you must modify one word in each, using these transformations six times each:

A letter on a stormy night…

This script is controllingly captivating… and this encore follows it to the letter!

Two of the rows in the finished grid will spell out what you need to do to keep this crazy play going.

"Did the play stop / because you made a mistake?"
"Must you alone / try it again? / To spin the tale of the perfect night?"
Tonight, we've been tamed by the world, and become "slaves" to the lead role's play...
I'm the only one who notices: this world is just a fake!

✎ Wait, some of these Down clues are fake! It looks like 11 of the Down clues you should solve have been disguised as Across clues, and replaced by a fake Down clue! The enumerations may be misleading, but you don't need any of the transformations from Act 1.

✎ The diagonal of the remaining Across clues [that is, the mth letter of the mth such clue] spells a word that may fit this exact moment, helpfully translated below.

The letters that you underlined in this puzzle spell a word that may fit this exact moment, helpfully translated above.

Tonight, so that the world shall be tamed, shall we become slaves to the lead role’s play?

✎ If you apply the four transformations (in the order given by the circled letters) to my ‘fitting’ word, you'll see a certain object that I needed in each of the previous three cycles.

The script is controllingly captivating...

✎ This object can be found in each of the previous three puzzles, with a different meaning each time. (One of these meanings is more commonly pluralized, and another may make more sense if punctuated.)

✎ Each of these appearances is somewhere in the clues, but has been ‘damaged’ in some way; the letters you’ve underlined in those puzzles (top to bottom on the page) will tell you how it has been damaged.

...and this encore follows it to the letter!

✎ Two of the rows in the finished grid will spell out what you need to do with the final answer you got from each puzzle, letting you modify the answers to those three clues.

And “once again”, we shall perform…
On to the En▒▒▒▒!

✎ Assembling these three pieces (in puzzle order) will produce a two-word phrase.

✎ This phrase is both "real" and "fake", for both the source series and this puzzle: 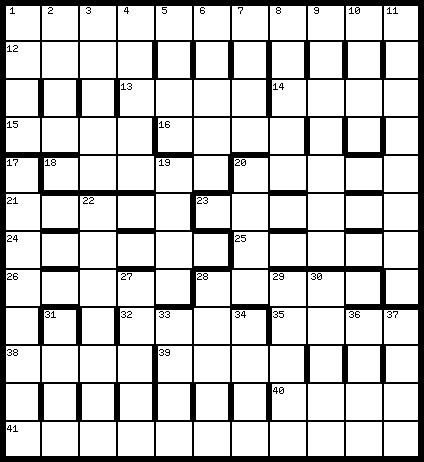 1. Space is free: engineered heading to go as hotel becomes inflamed (4, 7)
12. Moderate state leadership (4)
13. Cutting down plants and people's origin, along with shortened character in Greek (4)
14. "Energetic character" ore picked up architect's first (4)
15. For amigo, is exploded steam missing apparatus at the end? (4)
16. Sister married to cold Latin (for now) (4)
18. Primarily, a school containing aristocratic people, as a group bringing about part of music (5, abbr.)
20. Catch a group of sixteen from France (5)
21. Extremely outlandish spacewalker in acknowledgement; showing concern (2, 3)
23. Did submit flat about detective (6)
24. New automaton that learns to be near plugs for IO, and so on (6)
25. Noisy baron disrobed to win gambling game, principally (5)
26. Illica's piece (with murder involved in hollow melodies) coats drops in the wrong place (5)
28. Simian missing one side: one with others (2, 3)
32. "I don't know... a famous soccer player adopted Mike, for one?" (4)
35. NYT owner once read out beef (4)
38. Small battery size found in odd parts of Alabama (4)
39. Fleece patch-applied item that's held by manila (4)
40. Friend of a large group said "Perhaps Capone, as the first person" (4)
41. Throws away drunkard's returned letters near beach (admitting bit of shame) (6, 5)

The solutions and grid for act 1 are given below. I'm slightly unsure about the wordplay for 40A. 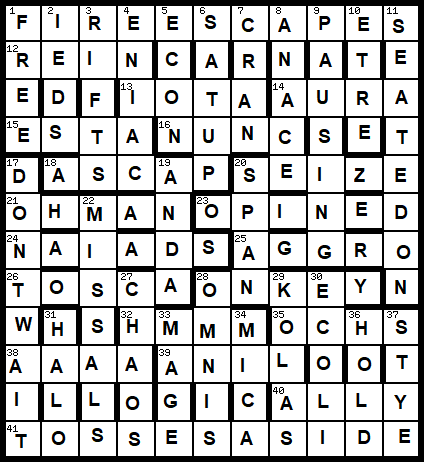 Here we should solve the across Schrödinger clues with different solutions. The ones I have are in the image above, but I'm missing 21A, 25A, 28A, 39A and 40A. However, we have enough to move forward and the grid is given below. 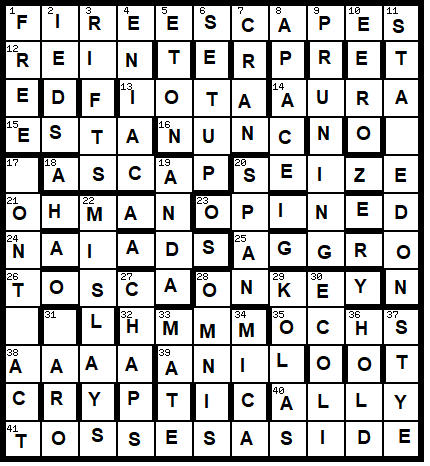 The remaining clues spell diagonally MITSUKETA which means "I found it!" The letters which we should underline in this puzzle in ACT 1 spell out EUREKA, also meaning "I found it!"

The circled letters spell out DO FIRST, THIRD, SECOND, FOURTH. Applying the transformations to MITSUKETA gives

In the first puzzle, we had A MINUTE (the time period), and the underlined letters spell STRUCK.

In the second puzzle, we had A MINUTE (as in minutes, notes), and the underlined letters (considering only letters before the page rip) spell RIPPED.

In the third puzzle, we had A, MINUTE (small a), and the underlined letters spell (when taken in the correct order from top to bottom in the pdf) TINTED.

Although we are missing some of the answers in ACT 2, we have guessed the missing letters on the relevant two rows so that they spell out REINTERPRET CRYPTICALLY.

So my interpretation is that we should reinterpret KILLING TIME, FIRST STRIKE and ESCAPE ROUTE cryptically to give the final answer. Perhaps KILLING TIME clues something related to cross (a cross, crossing...) but the best I can come up with is CROSSING S OUT and I'm not particularly confident with that answer.

Deusovi hints at in the comments that we should look at the specific clues where the damage has taken place. In the first puzzle, A MINUTE is struck from the clue

The second puzzle is slightly trickier. We are looking for a clue where A MINUTE (likely as in a note, record) is ripped. Perhaps this means clue 29d, which begins with the word "Note" before being ripped, having the answer

In the third puzzle, we are looking for A MINUTE which is tinted. In solving the puzzle, we highlighted one lower case "a" in the clue

19a. face of soldierly nation creates type of tank - SCUBA

The final answers in each of the puzzles were KILLING TIME, RETREATED and ENCRYPTED. Performing these operations for the above answers, we finally arrive at

which indeed, both is and is not an accurate description of the puzzles and related work!