My Uncle Redbeard, the great sailor and shipwreck-hunter, is in trouble and needs my help! This morning a mysterious parcel arrived in the mail containing a letter from him, a couple of pages from his diary, and a map: 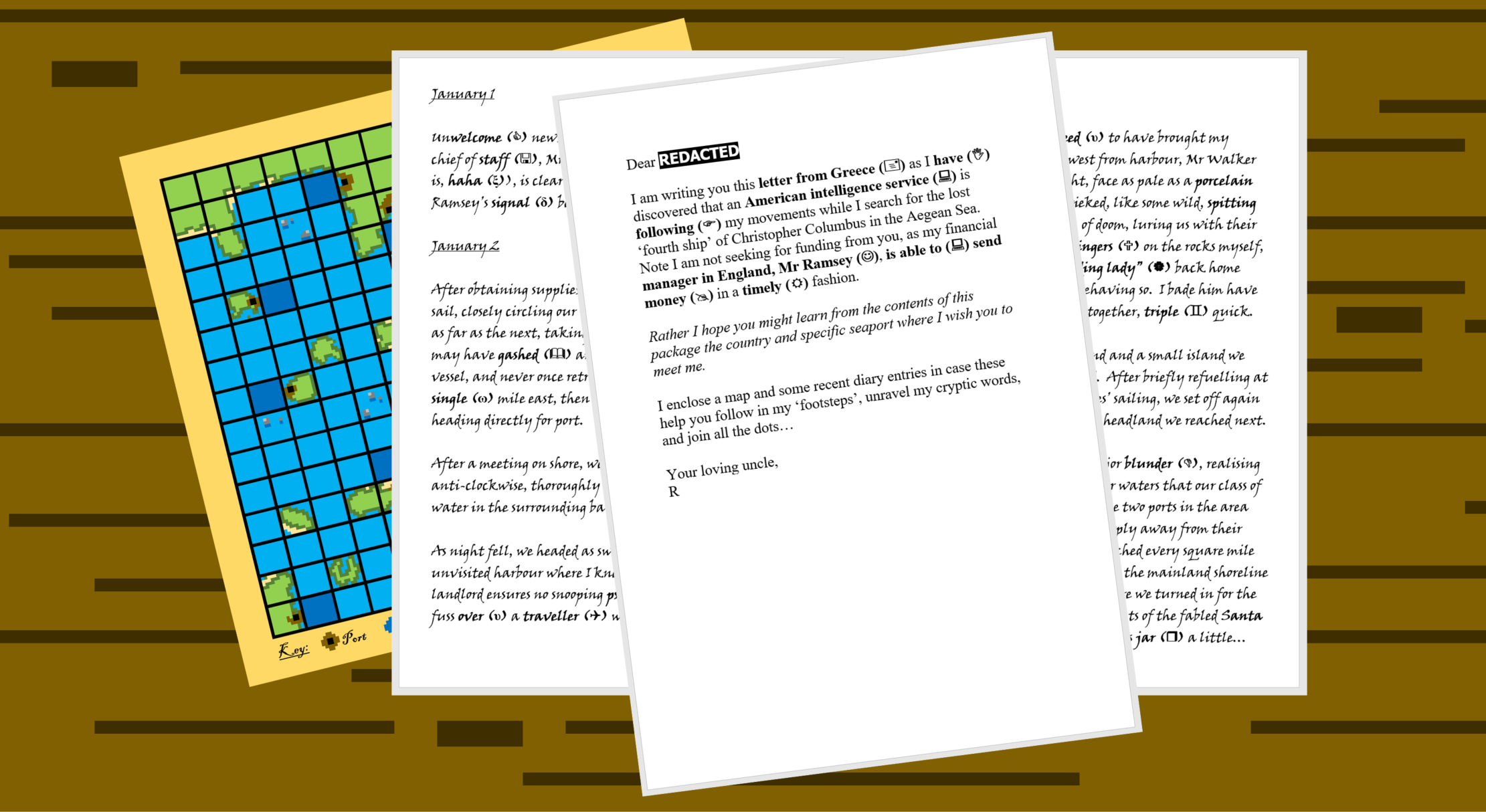 Each item can (and needs to) be viewed in full using the following links: Letter, Diary, Map

It's clear from his letter that I need to meet him somewhere - but I don't know where! (Though I'm pretty sure all this talk of Greece is codswallop...) He says that I should be able to identify both the country and the specific seaport where I can find him hiding out...

TASK: Using the information provided in Uncle Redbeard's letter, diary and map, identify both the country and the specific seaport where he is currently in hiding.

For accessibility, the text of the letter and diary is reproduced below (spoilered to avoid clutter), with character names replacing the symbols used in the letter and diary. However, I strongly advise you to make use of the visuals for ease of solving.

I am writing you this letter from Greece (envelopefront) as I have (handhalt) discovered that an American intelligence service (pc) is following (handptright) my movements while I search for the lost ‘fourth ship’ of Christopher Columbus in the Aegean Sea. Note I am not seeking for funding from you, as my financial manager in England, Mr Ramsey (smileface), is able to (pc) send money (handwriteleft) in a timely (sunshine) fashion.

Rather I hope you might learn from the contents of this package the country and specific seaport where I wish you to meet me.

I enclose a map and some recent diary entries in case these help you follow in my ‘footsteps’, unravel my cryptic words, and join all the dots…

Unwelcome (thumbup) news has reached me – they’re onto us. My chief of staff (floppy3), Mr Walker (eternal pessimist (frownface) that he is, haha (xi)), is clearly spooked (skullcrossbones). We depart tomorrow at Ramsey’s signal (delta) before our foes can settle the score (circle6).

After obtaining supplies from a local storekeeper (book), we set sail, closely circling our island clockwise before heading north as far as the next, taking care to avoid rocky outcrops that may have gashed (book) and lacerated (mu) the hull of our vessel, and never once retracing our ‘steps’. We travelled a single (omega) mile east, then two north, before turning and heading directly for port.

After a meeting on shore, we circumnavigated the island anti-clockwise, thoroughly examining every square mile of water in the surrounding bay.

As night fell, we headed as swiftly as possible to an as-yet-unvisited harbour where I knew of an inn whose discreet landlord ensures no snooping psychoanalyst (readingglasses) makes a fuss over (upsilon) a traveller (airplane) who desires privacy.

Hideous rain – very glad indeed (upsilon) to have brought my raincoat (gamma). On heading due west from harbour, Mr Walker fell out of his chair (handptdown) in fright, face as pale as a porcelain (frownface) doll’s. “Mermaids!” he shrieked, like some wild, spitting creature (xi). “Harbingers (taurus) of doom, luring us with their haunting melodies!” I saw no singers (crossoutline) on the rocks myself, and I suspect Mr Walker’s “leading lady” (rosettesolid) back home would blush to see her husband behaving so. I bade him have some pride (leo) and pull himself together, triple (gemini) quick.

After passing between the headland and a small island we sailed due south until we hit land. After briefly refuelling at a dockyard that was within 3 miles’ sailing, we set off again heading east, tightly rounding the headland we reached next.

Soon after I narrowly avoided a major blunder (thumbdown), realising just in time that we were heading for waters that our class of vessel was forbidden (clear) to enter (the two ports in the area are particularly strict). Veering sharply away from their territory, we sailed past both and searched every square mile of the next bay for the wreck, hugging the mainland shoreline until we arrived at the next port, where we turned in for the night, still uncertain of the whereabouts of the fabled Santa Amigo (snowflake) – something that really does jar (boxshadowup) a little…

The compass in the top right has many different symbols on it. The words associated with a particular symbol can be placed on top of it:

you may notice that there are many of these on top and on the left -- this suggests that this is actually a crossword! And indeed, we can solve this as a non-cryptic crossword, where each clue is placed at the starting point of its answer. 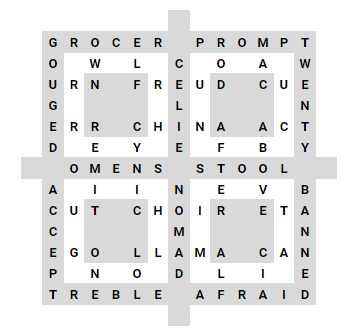 Also, given the journal,

we can deduce the route that the ship took. We must start from the port in column 5 (based on the ability to go clockwise and then north), and continue from there... 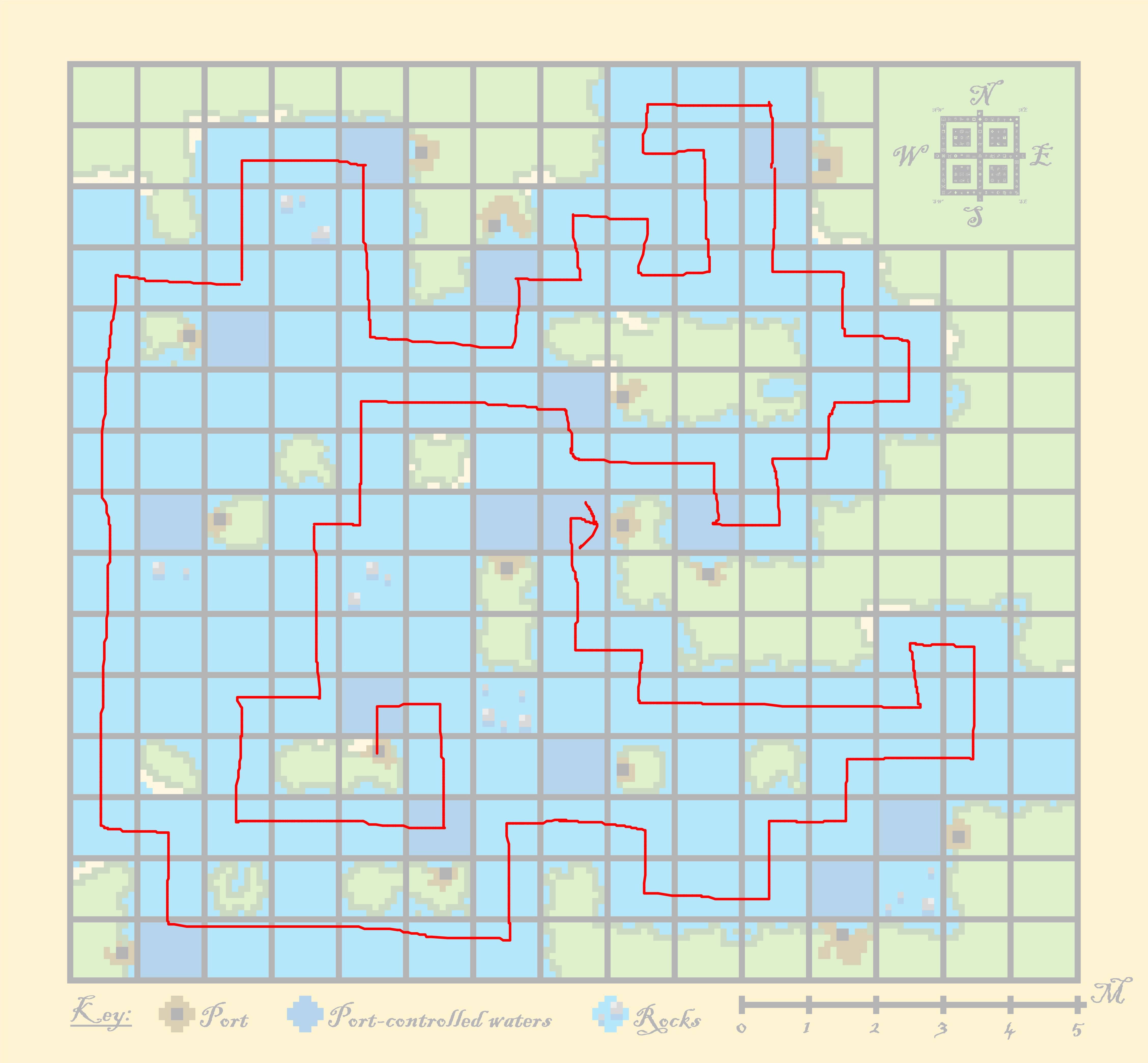 Now, combining the information together:

Overlaying the path on the crossword traces something out: 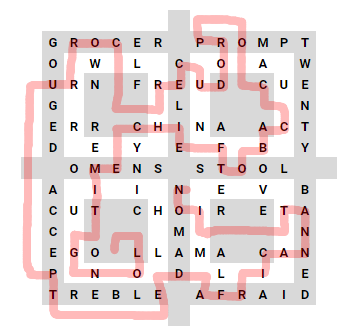 This is a cryptic clue - "corrupted" is an anagram indicator, "African nation" is the definition, and the answer is the very long anagram DEMOCRATIC REPUBLIC OF THE CONGO.

To get the particular seaport,

use the symbols on the compass again. All of them are from Wingdings and similar fonts, except for a few - the 24 Greek letters. Drawing a line from Greek letter to Greek letter, in order, gives a picture: 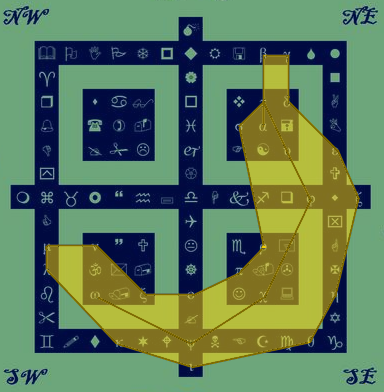 This is a BANANA, which happens to also be the name of a seaport in the Democratic Republic of the Congo.

Thanks to Gareth McCaughan user39583, and M Oehm for help after the crossword assembly.

Deusovi and the commenting crew have already found out in which country the meeting point is. But Uncle Redbeard has also specified a seaport. We just need to "connect the dots".

(This partial answer, which really just provides the last bit, continues and spoils the work of Deusovi's answer.)

... are not really dots. They are the odd ones out in the symbols: All symbols are taken from one of the various Wingdings / Dingbats fonts, except the Greek letters. All 24 letters are present and if we connect them in the order of the alphabet from α to ω, we get this: 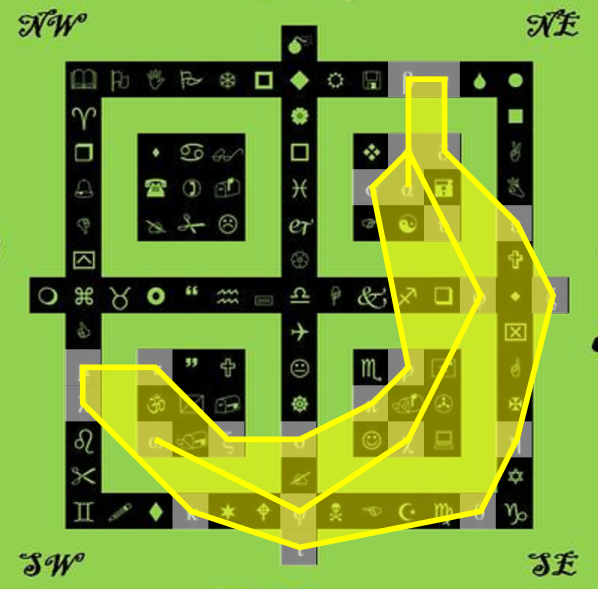 This is clearly a reference to ...

... Banana, which is one of the seaports in the Democratic Republic of the Congo. So let's go there.

Not the answer you're looking for? Browse other questions tagged visual story cryptic-clues crosswords mazes or ask your own question.