Came up with some cryptic clues and I thought I'd put them in a crossword. There isn't a theme, all answers are in English, and this is my first time, so any criticism would be welcomed! (Partial answer: have all but 14A)

A lot of these clues seem to me to not work -- at least according to Ximenian standards. The two main issues I see here are: 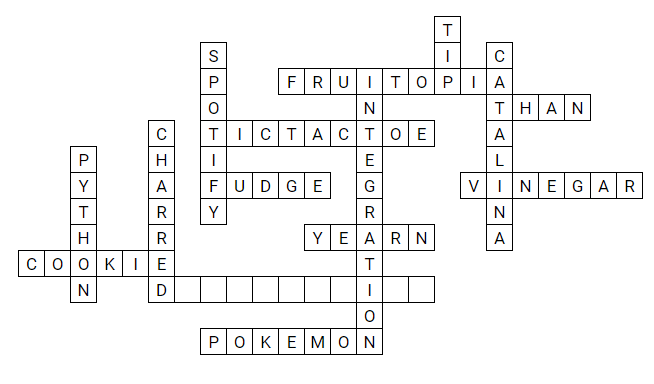 FR + U(I)TOPIA. I think the word "this" is extraneous.

...THAN. "Compare to" doesn't work as a definition - you would need something along the lines of "as compared to" for the definition to be the same part of speech.

TIC TAC TOE (punny ddef). Defining "TICTAC TOE" as a single phrase seems a bit questionable to me -- I would've at least added a question mark to this one.

VINE + GAR<. The second word "a" is extraneous.

Y+EARN. I'm not convinced that "yesterday" is abbreviated with just a Y? It's something I'm not familiar with, at least.

COOK + I.E.. This was a nice clue! No complaints here.

POKE + MON(-ey). I'm not quite sure it's fair to use "some" to indicate "any substring

TIP<. "from a" are extraneous.

_SPOTIFY_. There seems to be nothing indicating that it's a hidden word, and a bunch of extra words.

CATALINA*. Not convinced that "be made [into]" is a good anagram indicator.

INTEGRATION (ddef-ish). The second definition doesn't work - "integration" is the process that lets you find the area under a graph, not the area itself (which is the [definite] integral).

CHARRED ("chard"). This one seems fine to me.

PYTHON (ddef-ish). "for snakes" doesn't work for a definition of PYTHON, and neither does "snakes" by itself -- either way, there's a mismatch.