In a game of English eight-ball pool, a set of 15 balls are arranged or 'racked' in the shape of an equilateral triangle. In order for the balls to be racked fairly, they must be arranged like so: 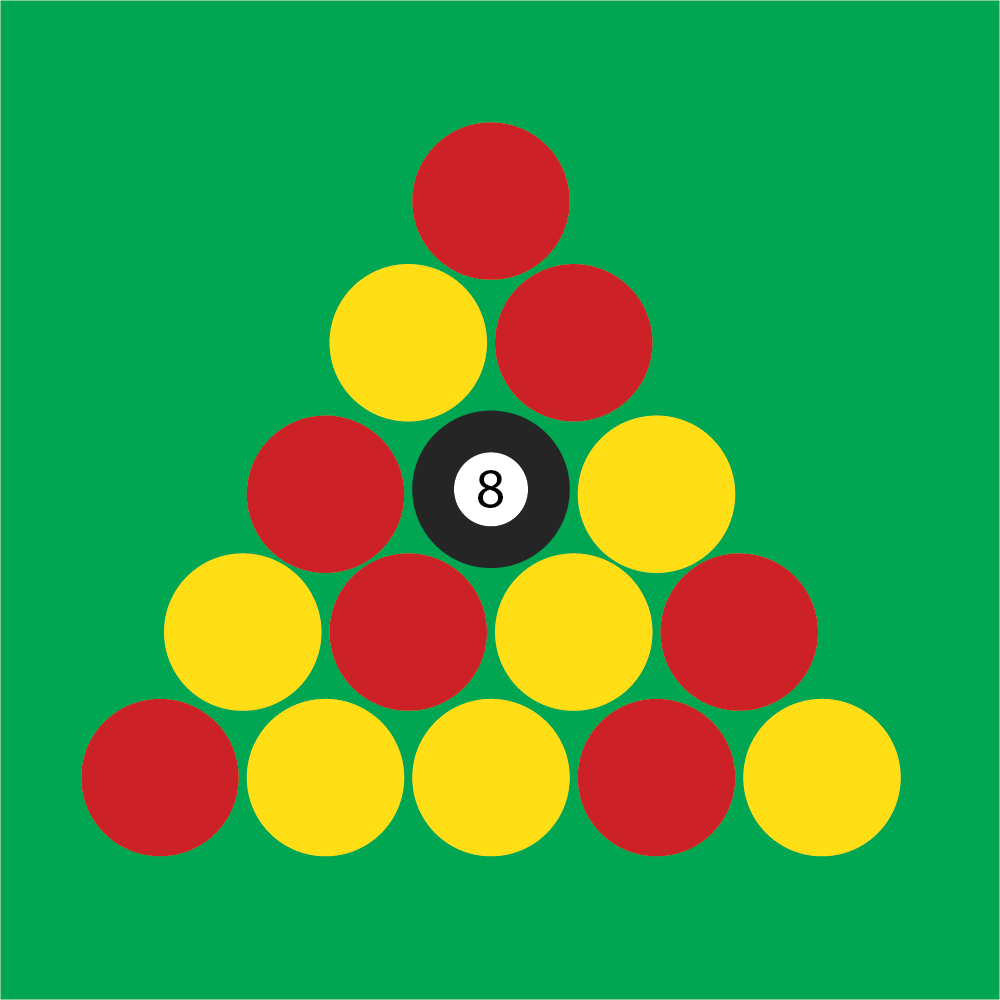 As a keen player of the game, I often consider what is the fastest way I could potentially rack a set of balls after dumping them in a random arrangement inside a triangle. I would then attempt to swap one pair of balls at a time until I have a valid rack.

I noticed that depending on how the balls were arranged before sorting, It could be quicker to sort the balls and then finish by rotating the triangle 120° in either direction.

With this in mind, considering every possible combination that the balls could randomly be arranged, what would be the most moves required to create any one of the valid racks as shown below?

The red and yellow arrangement of balls can be inverted and as the rack is a equilateral triangle it has a rotational symmetry of 3, Therefore there are 6 possible valid solutions: 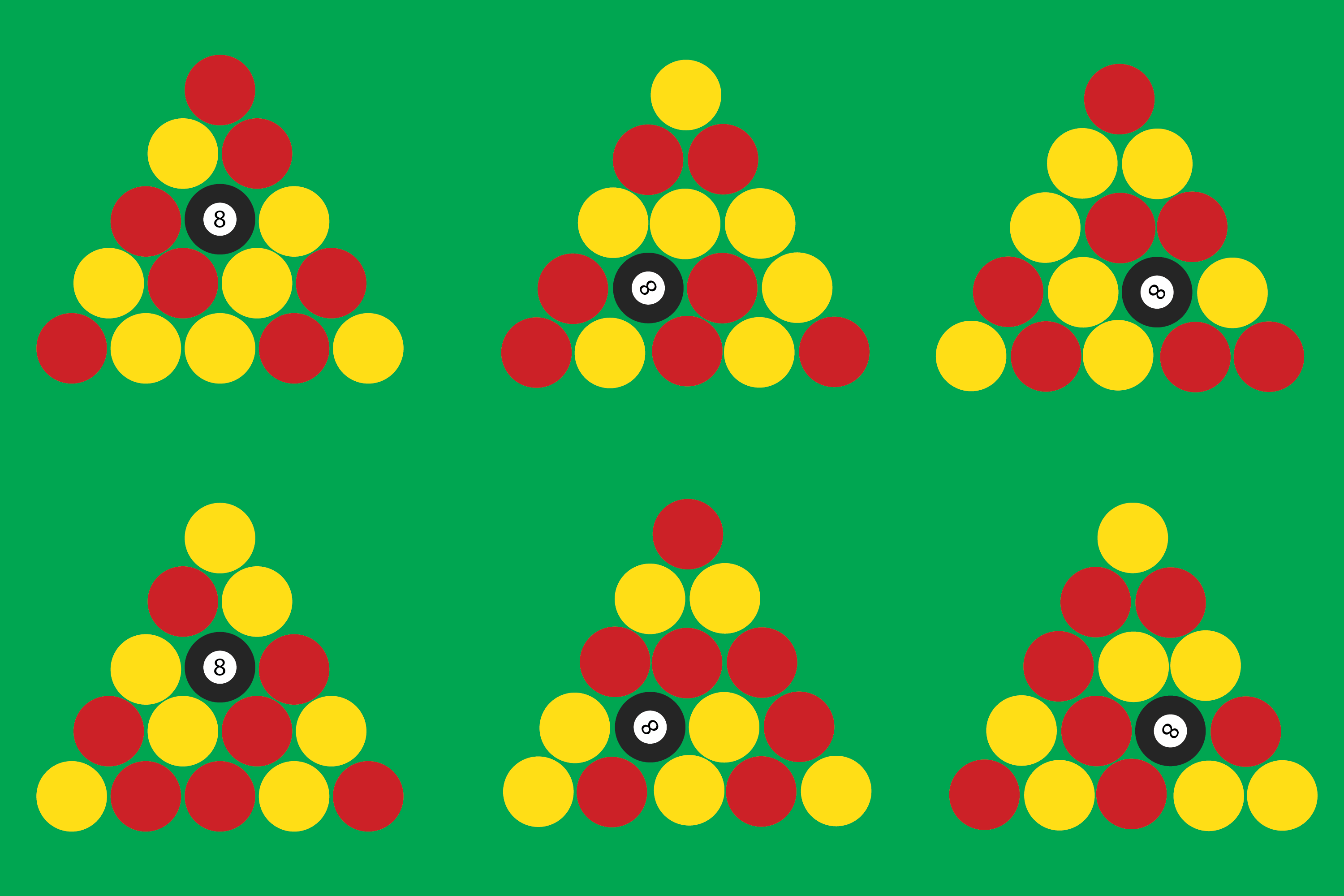 In theory, reflecting the pattern would create an equally fair racking arrangement, however it would not be a valid rack within World Rules.

For American pool players the distinction between yellows and reds can be considered the same as 'spots and stripes'.

This is not a mathematical, but more of a logical approach:

For every possible combination of the balls, there are at most 4 moves required to create one of the valid racks.

The corner positions and the center positions of each edge all together contain six balls from which three are yellow and three are red for every valid rack.
If we place six balls from the same color in these spots (as seen in the image below), there will be three moves required to fix these positions. 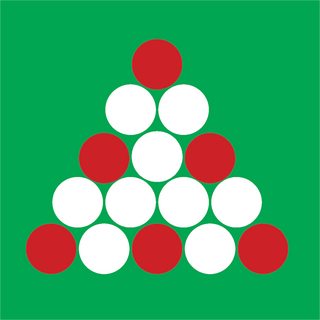 Now theres is one red ball left. No matter where it is placed, there will always be a rotation/invertion combination, where the ball is in a correct position. Therefore it does not matter where we place it. 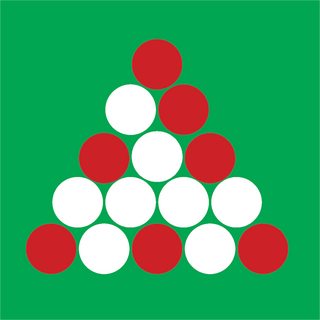 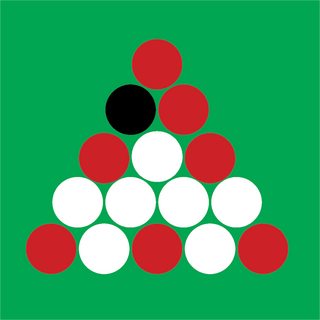 The black ball now leads to the fourth required move.
Now we can fill up the rack with the yellow balls. Their positioning will be fixed by using the correct moves to fix the black and red balls.

One possible combination that requires at least four moves: 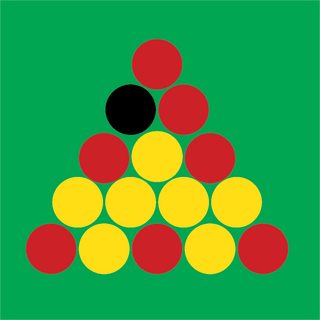 Not the answer you're looking for? Browse other questions tagged mathematics no-computers combinatorics optimization real or ask your own question.