This is a Sashigane-Statue Park hybrid. The rules might look complicated, but they're just the two rulesets smushed together. Familiarity with both genres will help.

Now that you've survived the rules, the actual puzzle. I've included all tetrominoes as a reference. 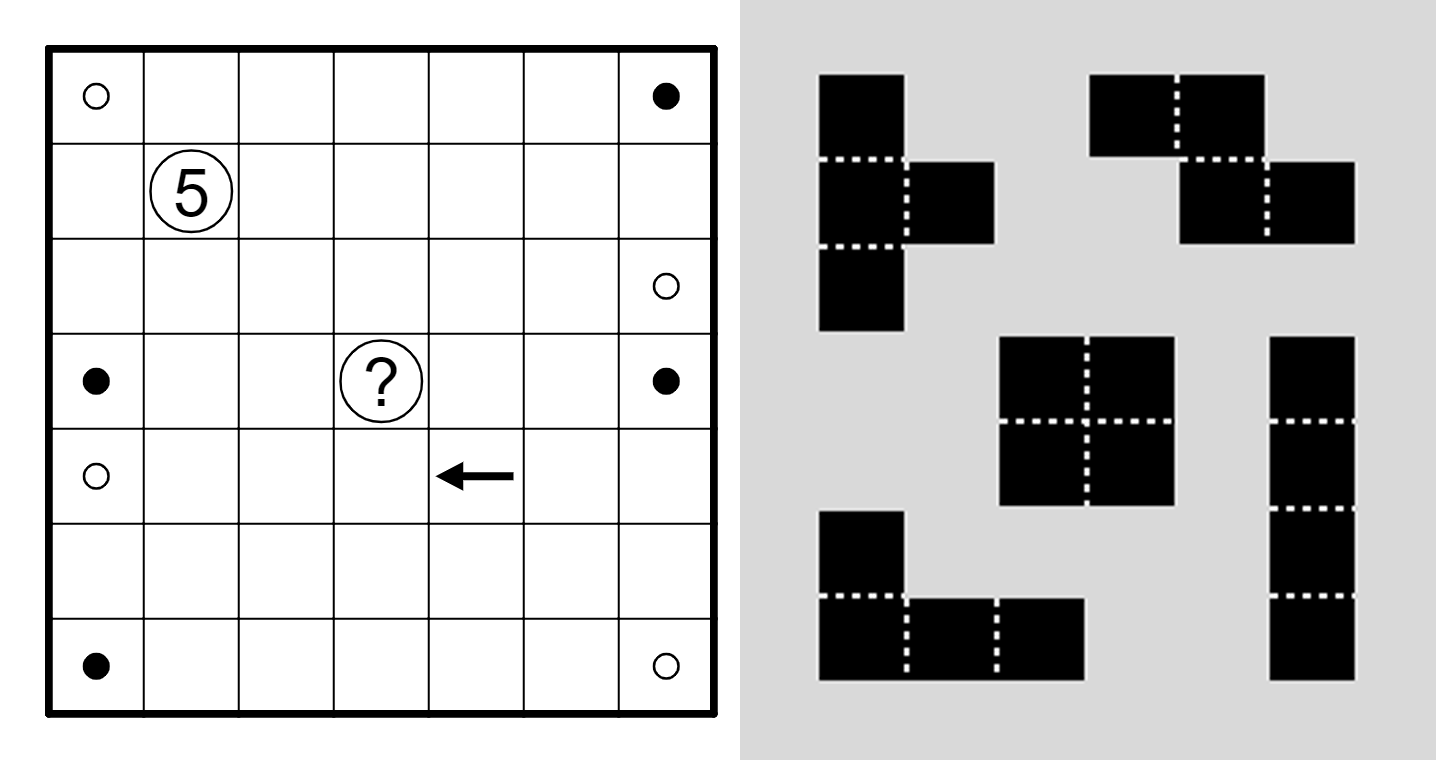 Nothing below this line is strictly necessary to solve the puzzle. It's just some useful information/tools, as well as clarifications about what kinds of answers I will accept.

Here is the puzzle in a Penpa editor

The first answer with a fully-explained logical solution path will get the checkmark. A full solution will have all cells confirmed either shaded or unshaded (for Statue Park) and have borders drawn in for all L-shaped blocks (for Sashigane) I welcome multiple answers, if later ones can show a better-explained, more elegant, or significantly different path. Please do not answer without an explanation/solve path.

Crash course in Penpa: Things that might be helpful to solve the puzzle

Finally, I would like to thank Sciborg. This puzzle type was dreamed up while we were DMing in Discord; they couldn't decide if they loved Sashigane or Statue Park more. The obvious move was to combine the two genres. 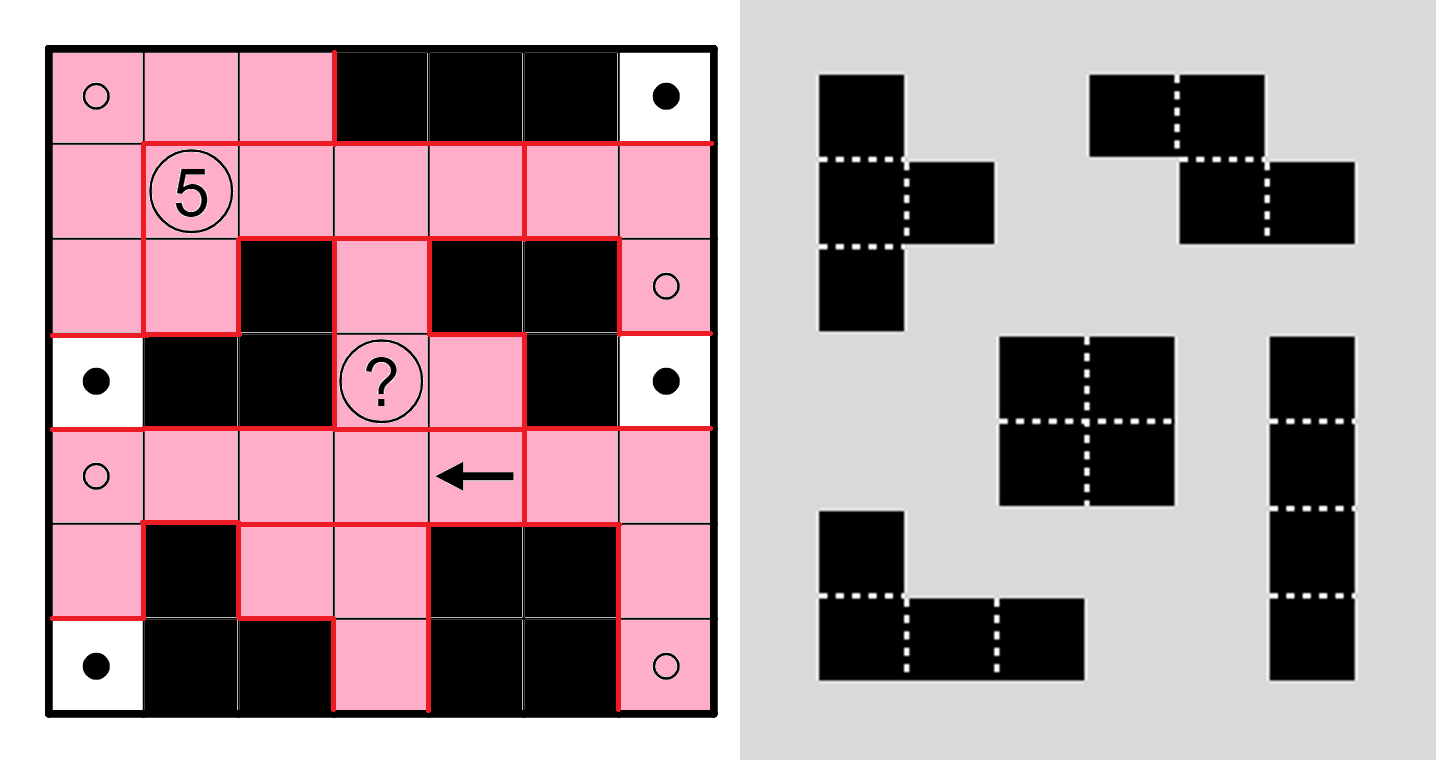 Let's start with some Sashigane logic:

The arrow is an endpoint, so we know it forms the end of an unshaded bend (I'm going to call the Sashigane figures bends so as not to confuse with the L tetromino). Pinking all the known "unshaded" squares, lets look at the 5. If its bend contains the square to its left, the bend must turn down, blocking the shaded tetromino that contains R4C1 in. So the 5's bend must go to the right, and using logic similar to the above, we see that if the 5-bend goes down, it can get at most one more square. So regardless of the vertical component of the bend, it must extend three squares to the right of the 5. Now moving to the ?, its bend cannot use the square below it, so we know it must go up by a single square. Our progress thus far: 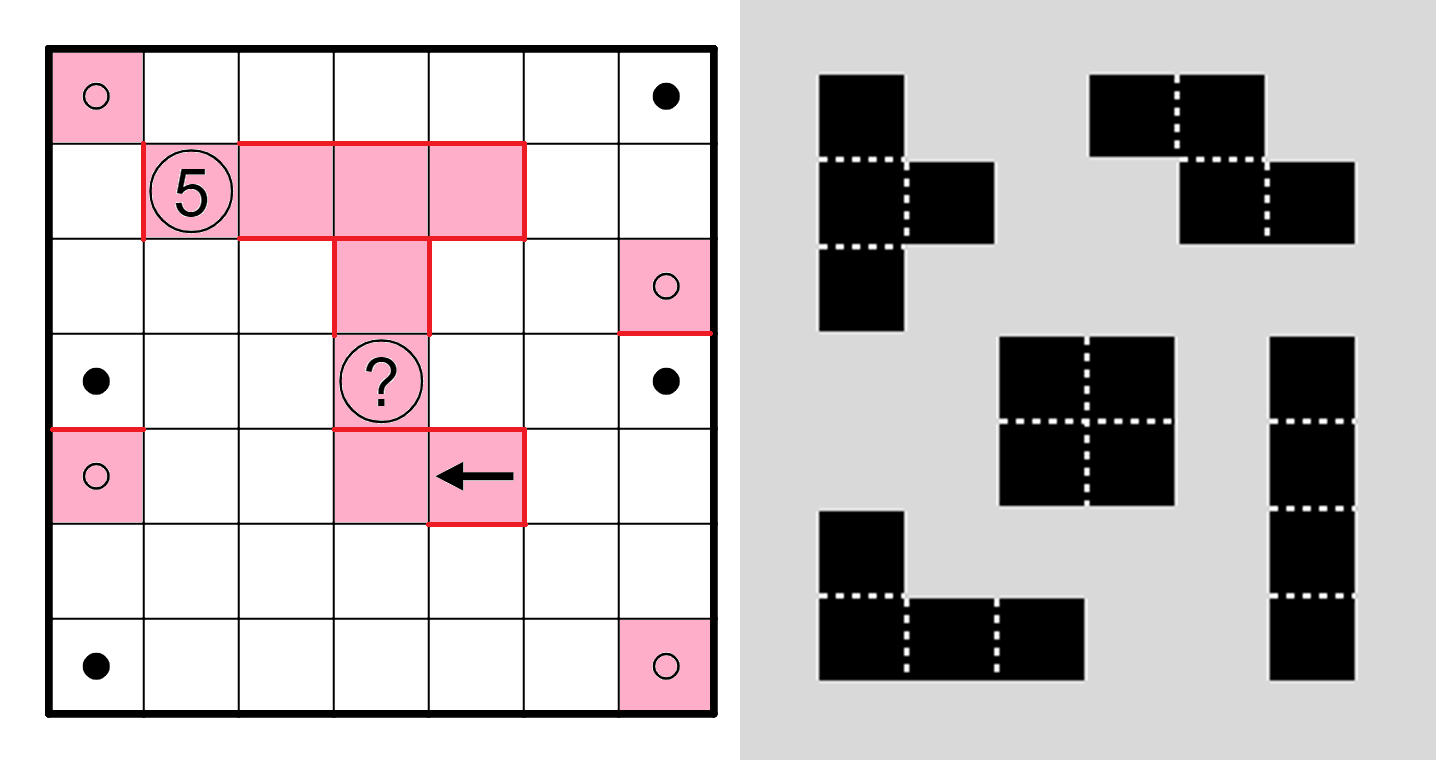 Suppose the 5-bend goes up. Then R1C3 would have to be unshaded, since if it were shaded it would have to be part of an I tetromino to its right that would abut the tetromino containing R1C7. But if it is unshaded, it must be part of a Sashigane bend which has its knee at R1C6 and goes down, blocking the upper right corner statue from being completed. This is a contradiction, so we know the 5-bend must go down.

The statue containing R4C1 must then contain R4C2. But we also know that R1C1 must be the knee of a bend; the only other possible knee is R1C6, but this would block the statue in R1C7 from being completed as above. So we know R1C2 and R2C1 are both unshaded, as well. Again mimicking the logic from the contradiction above, we see that R1C3 must be unshaded as well. The grid thus far: 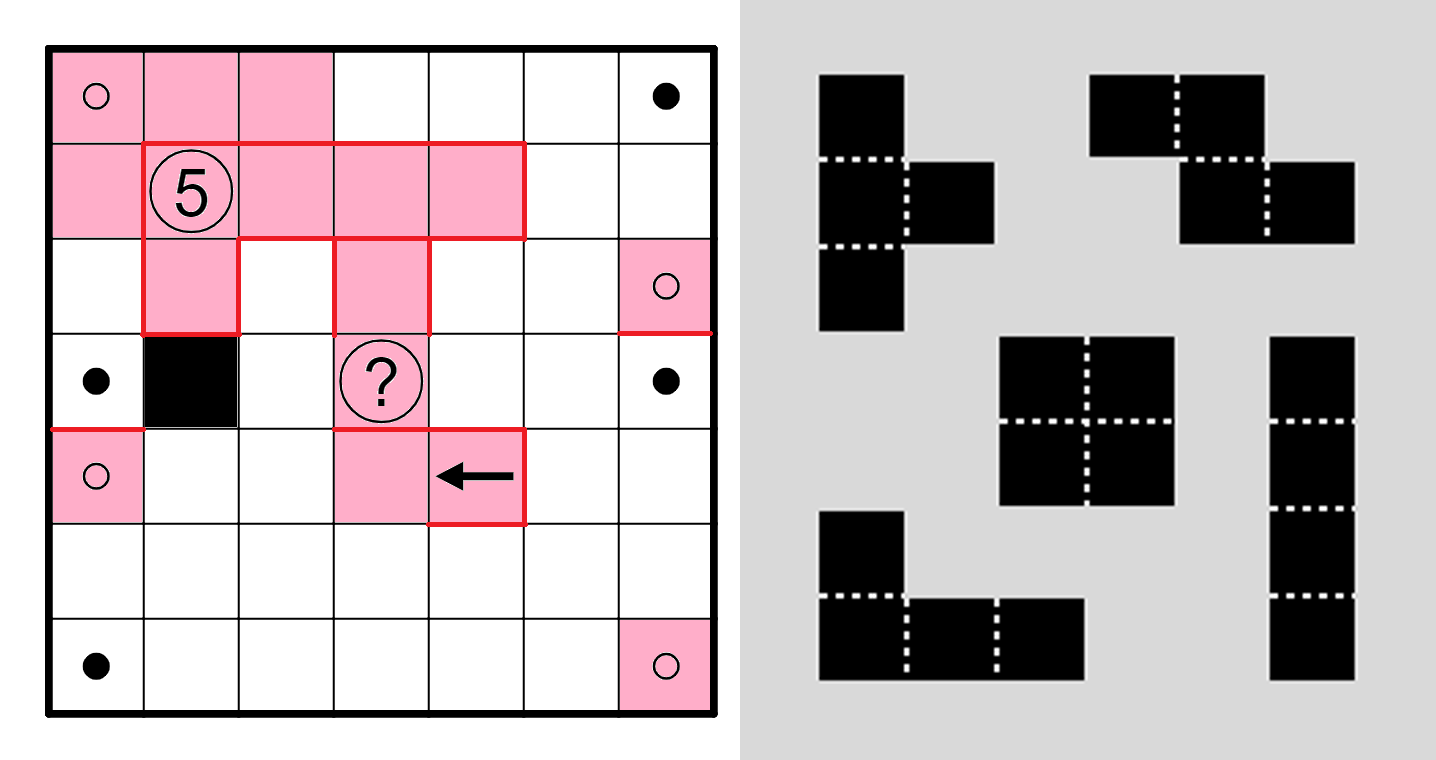 And the ? bend again:

Let's move to the upper right corner. Suppose R2C7 is shaded. Then R3C7 must be the end of a bend and continue into R3C6, which forces R3C5 to be an unshaded, and also the end of a bend which continues into R3C6. These cannot both happen, which is a contradiction, forcing R2C7 to be unshaded, and thus R1C6 to be shaded. Moreover, we cannot have both R2C6 and R3C6 shaded, since that would not allow the bend on R3C7 to complete, so we must have R1C5 shaded as well. The grid thus far: 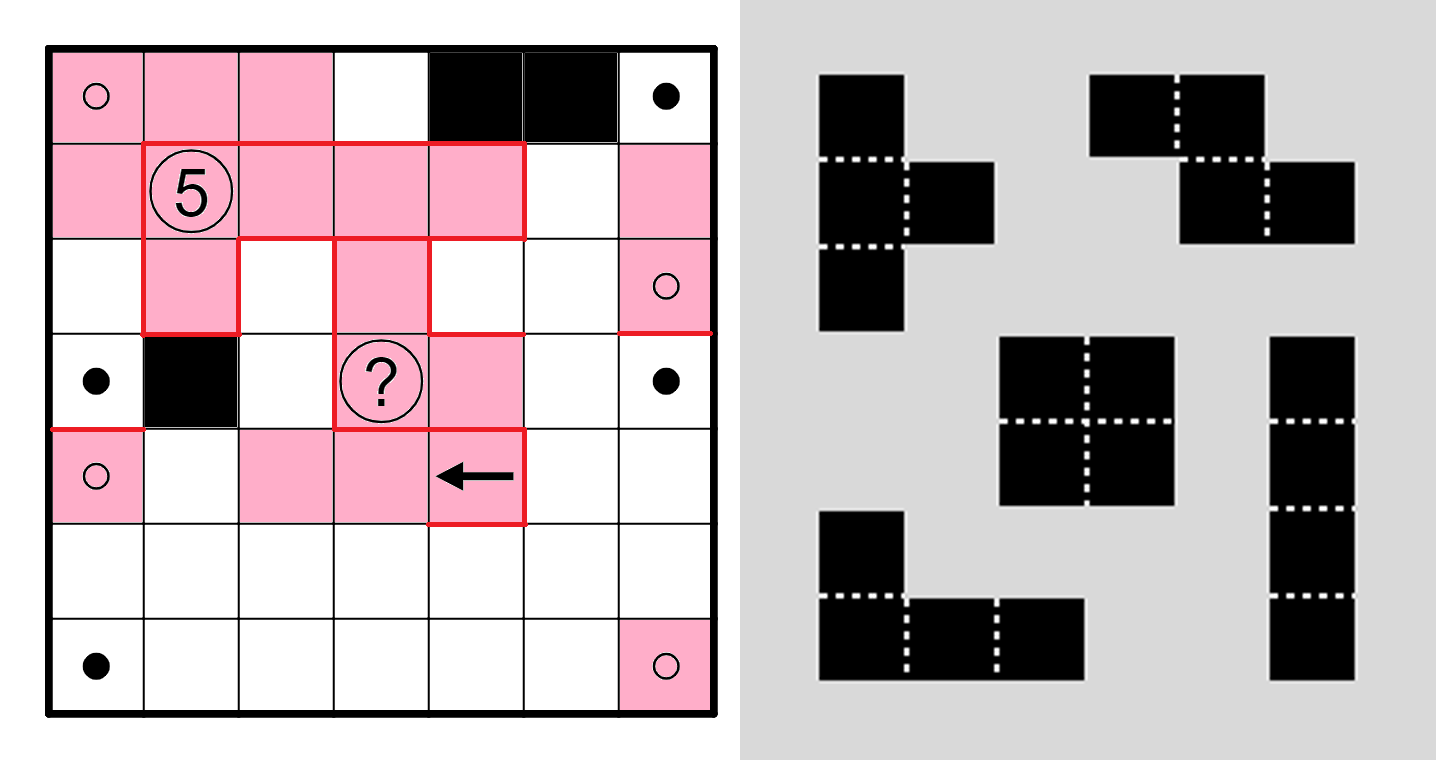 There are only four statues placed by the given clues, forcing there to be a fifth statues that does not lie on one of the clued spaces. It is not hard to see that this statue is somewhere in R6C4-7 and R7C4-6 by analyzing how it impinges on R4C7 and R7C1. If it uses R6C7 it must be an I, since it cannot go up into R5, and if it cuts into R7 then the unshaded square in R7C7 cannot lie in a bend. But this forces the upper right statue to be a T, leaving not enough room for the R4C7 statue. So the fifth statue is in R6-7C4-6.

A contradiction forces the L and the I:

Suppose R5C2 is shaded. R6C2 cannot be shaded, since it would block the statue in R7C1, and R4C3 cannot be shaded, since that would isolate R3C3 unshaded and not in a bend. So this must be an S with R3C1 shaded. Moreover, for R5C1 to be in a bend, it must come down around the S, forcing R7C1-3 to be shaded. Neither R7-8C4 can be shaded: one is directly adjacent to the R7C1 statue, the other would block its two remaining candidate squares...thus the "fifth" shape is an O in R6-7C5-6, forcing R6-7C4 to be unshaded and R6C3 shaded completing the L in the lower left corner. But now R6-7C4 cannot be in a bend, yielding a contradiction. This forces the statue on R4C1 to be an L. 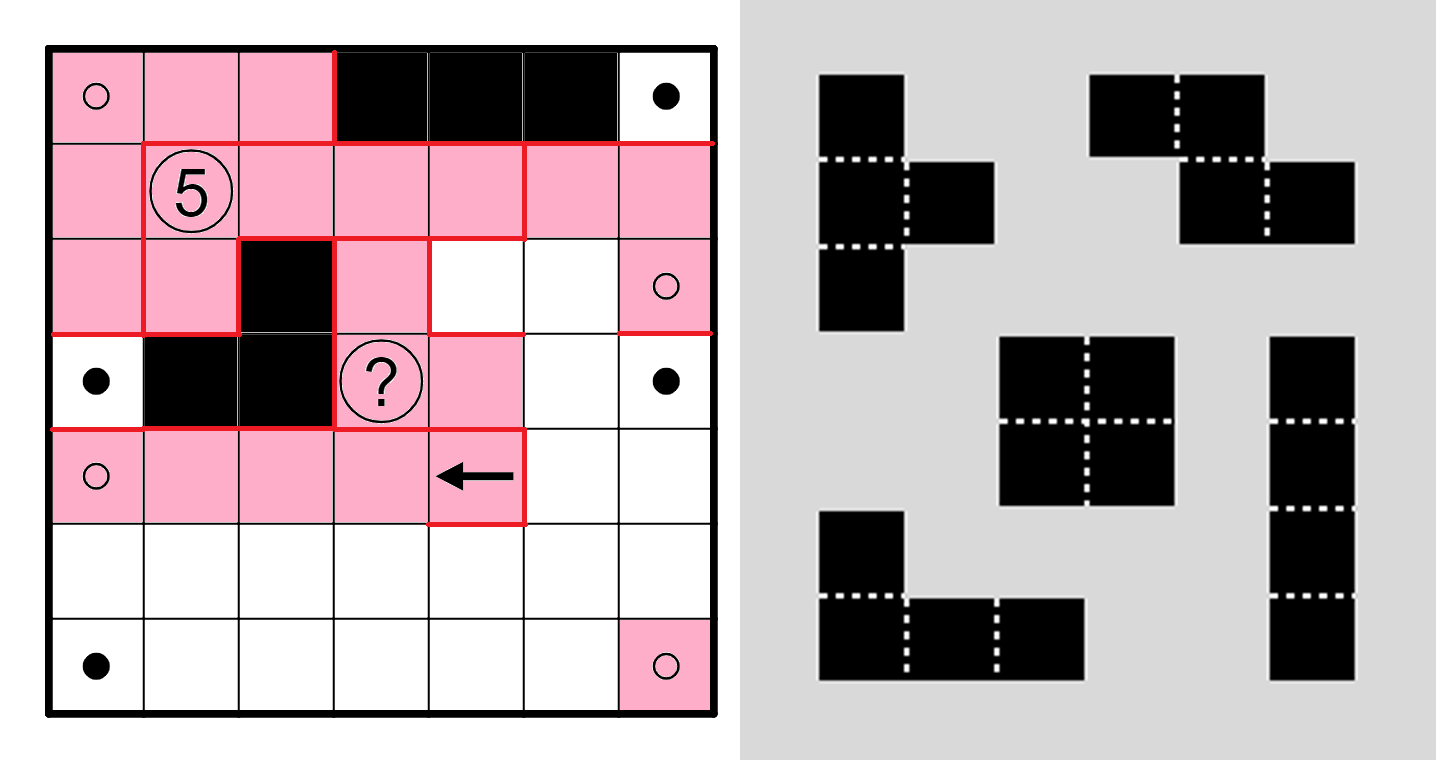 Since R2C6 is unshaded, it must be in a bend, but its bend cannot go down, since it would block a bend for either a forced unshaded R3C5 or R3C7. Thus it must go right and then down to R3C7. This also closes off the ? bend at C5, since R4C6 is either shaded or if unshaded in a bend with R3C5.

Now suppose R3C5 is unshaded. As above, it must bend around to at least R4C6. The R4C7 statue cannot cover R6C6, since this would not leave enough room for a fifth statue, so it must be a T. This forces R8C8 to bend out to the left, so the fifth statue has to be an O in R6-7C4-5. But this blocks the S that would have to be in the lower left corner. Hence R3C5 is shaded, joining R4C7 in an S. The grid thus far: 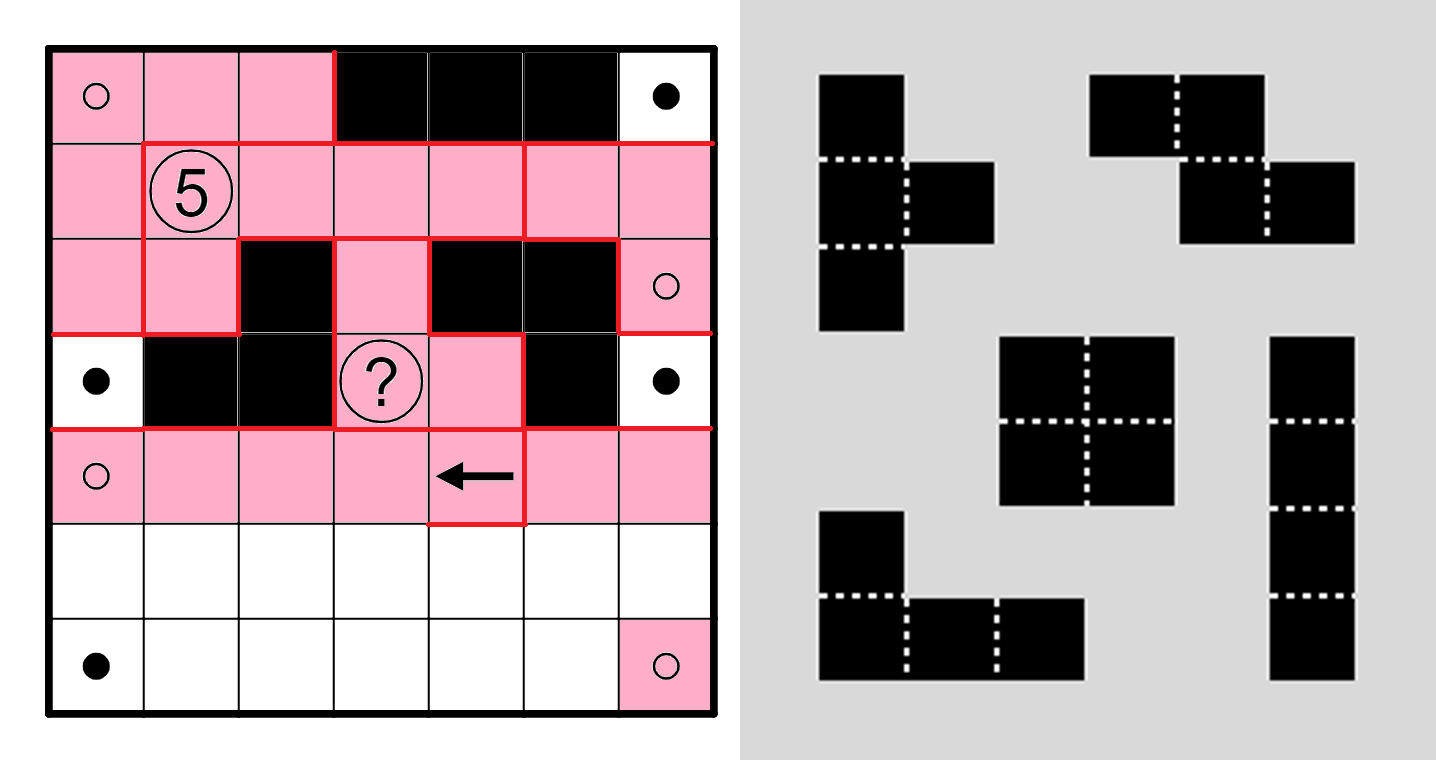 The "fifth" statue is either an O or a T. If it were a T, then to its right there are five contiguous squares which do not form a bend, and cannot form two bends. So this must be an O, which forces the lower left to be the T. The rest is trivial deduction.