Detective Dad is on the case!

The house was quiet... Suspiciously so. The father of the house knew immediately that something was wrong. A crime had been committed. The suspects were three boys – let's call them suspects A, B, and C – and three girls, suspects X, Y and Z. But who was guilty? And what was the crime? The father had two suspicions.

Suspected crime A: Theft. Twelve clues are missing a valuable item (one of two different types), which must be restored before solving, adding spaces and correcting capitalisation where necessary.

Suspected crime B: Forgery. Ten other clues are counterfeit, containing only a small mistake in the location of one item that's invisible to the naked eye. These mistakes must be corrected before solving.

All modifications produce real words found in the UKACD. To help identifying the types of items needed in "theft" clues, ten pairs of successive clues1 – neither of which are "theft" or "forgery" clues – have one extra letter clued in the wordplay part. In each pair, one clue has the extra letter at the start and the other has that same letter at the end. These extra letters (each counted only once) spell out a term which contains an example of both types of valuable items that are used in "theft" clues. Most of the items are common terms; of the more obscure ones, one is from Central America and two are associated with the numbers 68 and 73. The remaining eleven clues are normal.

For each valuable item in "theft" clues, if the item is capital, pick its symbol; if the item is not capital, pick only the capital part of its symbol. These selections, in clue order, spell out the location of some letters in the grid which form Exhibit A. This reveals which of the suspected offences was the actual crime committed, as well as the geographical location of the scene of the crime.

The letters affected by the foul play in "forgery" clues spell out Exhibit B. This reveals the time at which the crime occurred, and also spells out the location of some letters in the clues which form Exhibit C. This reveals the identity of the culprit(s), as well as the target of the crime, the specific variety of which clever detectives may have found out in an earlier step.

1 "Ten pairs of successive clues" here means that the two clues of each pair are directly next to each other in the order written, but there can be other types of clues between pairs. 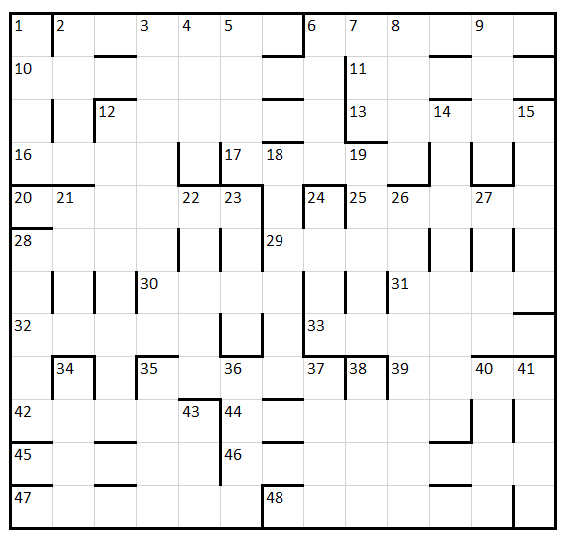 Down
1. In the middle of regular selections of avid film fan in retrospect (4)
2. Seen behind back of tax image discovered Angelo's ultimate Shakespearean villain (4)
3. In support of getting closer to bein searching for food? (8)
4. Small amount of arsenic comed with sarin, for example for Ottoman officials (4)
5. Extremists in linguistics have semi essentially removed from Persian? Maybe it was once of value in the Baltics (4)
6. Cause destruction of cells destroying entrance of Parisian palace (4)
7. In the manner of core parts of firearms regulation (1,2)
8. Name of female – queen, for instance – ignoring Commonwealth's boundaries (4)
9. Parliament Road? That is to the north of Texas's capital (4)
12. Split citizen possibly played with raincoat (8)
14. Cat breaking fragile dish's top (8)
15. Ecstasy is gold after raisin ghost O'Donnell (5)
18. The male control is on the inside of this (6)
19. Spired league finals with essentially meaning to become Trump follower (5)
21. Feel overwhelmingly welcomed, darling (4)
22. Frames in Ireland arc hover edge of Ocean – tubers are grown here (6)
23. Top redcoat regularly holding map (4)
24. Province in the country of barely inviting African Union's leaders (4)
26. Novel finally honest op language of Nineteen Eighty-Four (8)
27. 1990s fad game about Shrek? (4)
28. Oral reconstruction in politician's tooth (5)
34. County's Mattel rest's conclusion (4)
35. Check the papers of vehicle driver at first (4)
36. Ready for happy little piggy (2,2)
37. Albert escapes undying bird (4)
38. Eisenhower as furniture retailer (4)
40. Upcoming soft drinks lead to difficulties (4)
41. This old city has walls put up very well, Mr. Orbison (4)
43. Hooray for Spaniard, one showing string of flowers (3) 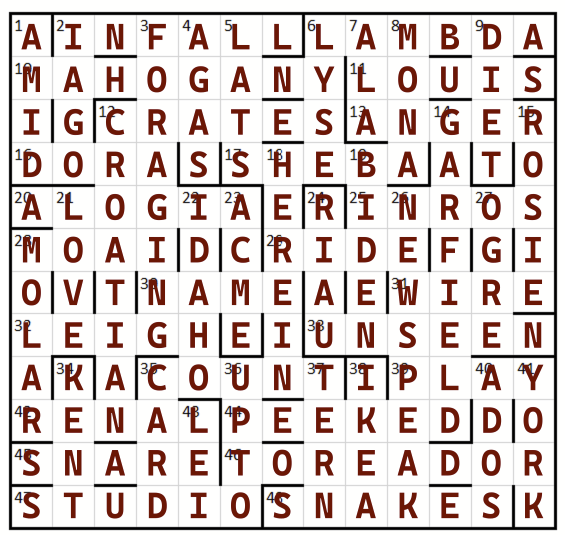 The valuables stolen in clues of type A (theft) are

some time after eight, C AND Y (one boy and one girl, accomplices in crime) stole some candy -- specifically, some After Eight mints. This instance of Crime A happened in Crimea.

a space has been moved from one side of a letter to another; the letter it has moved past is the one used for the extraction. These letters yield Exhibit B, AFTER EIGHT, which as well as telling us when the crime was committed and what was stolen also indicate that we should look at the letter after each occurrence of eight in the clues. There are five of these, and the following letters -- Exhibit C -- are C,A,N,D,Y.

yield SILVER PESO: one metal, one currency. (And a SILVER PESO is a thing: a type of coin which exemplifies both.)

I was missing aspects of 48a and 23d. Deusovi, whom I'm afraid I ninjaed by what seems to have been a very small margin, kindly provided those in comments. He also pointed out (in TSL chat) a better way to interpret what Exhibit C says about the culprit -- my original suggestion, which kinda works but is clearly worse, was that one of the girls is called Candy. If you like this answer, you might want to find something of his and upvote it.