Follow your heart and find the hidden 3 letter code: 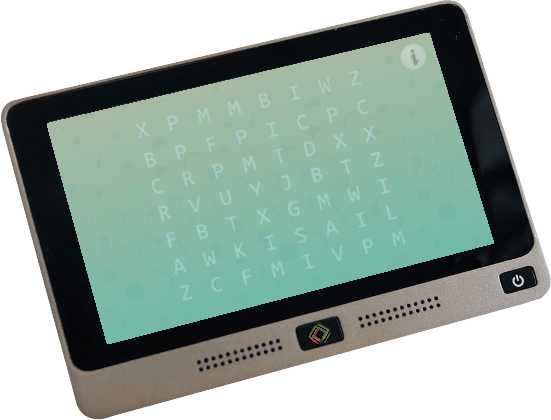 The instructions tell us

that we should trace the message "your heart" on the keyboard. The info screen suggests that each key press will use rot25 for the pressed letter and all the adjacent ones (rotating each letter backwards A->Z, B->A etc.). There is only one place where to start the message

After that we continue finding the next letters in adjacent squares

In the picture above, we have to choose carefully between the two possible R, because only one of those makes it possible to advance to an H next.

Here we notice that OP has also hidden their own name in the puzzle. Again, we have to choose the E which allows us to advance the message.

Inside the heart symbol, we find the hidden code: PSE

Not an answer yet, but I'm writing down everything I notice and hoping it'll come to me

The screen isn't the same size so I'm not sure how the rule from the info screen applies exactly. It could be scaled up but I noticed the second to last line AWKISAIL looks a lot like the OP's name and originally this was a story about them. Lets see if that looks like a key.
AWKISAIL > AVIGRAIL 0 -1 -2 -2 -1 0 0 0

Not sure there - might just be chasing a red herring. Shifting everything by one as in the previous example (just expanded) gives:
XPMMBIWZ
BOEOHBOC
CQOLSCWX
RUTXIASZ
FASWFLVI
AVJHRZHL
ZCFMIVPM
Wow, not helping in the slightest. What I was hoping for, from the "follow your heart" clue, was something like HEARTABC where ABC would be the three letter solution.

I feel like the AVIGRAIL bit is closer but I'm not yet sure how the rule translates.

13
Victorian Love Letter - The name has rubbed off. Who do you deliver it to?
15
Seeing through your dollar
7
A head, a heart and a tail
8
It's Safe To Follow Instructions
7
Enigmatic R E ( R E B U S ) B U S
7
Hey, watch your step!
7
Welcome in room number 2
5
A heart that never beats
8
Obfuscated characters