The original puzzle contained a mistake, this has now been fixed. I'm really sorry about that! 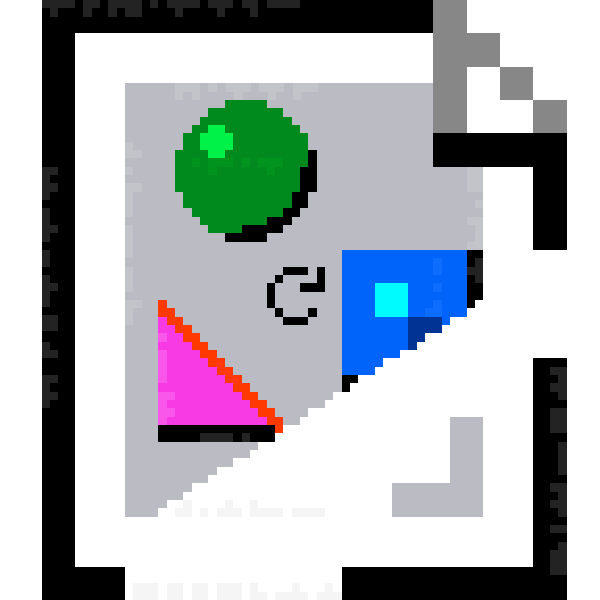 The word-search is 8x8

The symbol which clues the missing four-letter word, also clues the direction that the letters should be added to the word-search

How many pieces is the word-search composed of?

The list of words in the word-search is exhaustive at the time of writing, but it's more than likely that at some point in the future, it will no longer be

Solved! Note first that this puzzle is tagged as wordsearch. This means that somehow or other we need to extract a grid of letters from this image. How? Well notice that if you look closely:

There are lines of small shapes hidden in faint colours throughout the image: 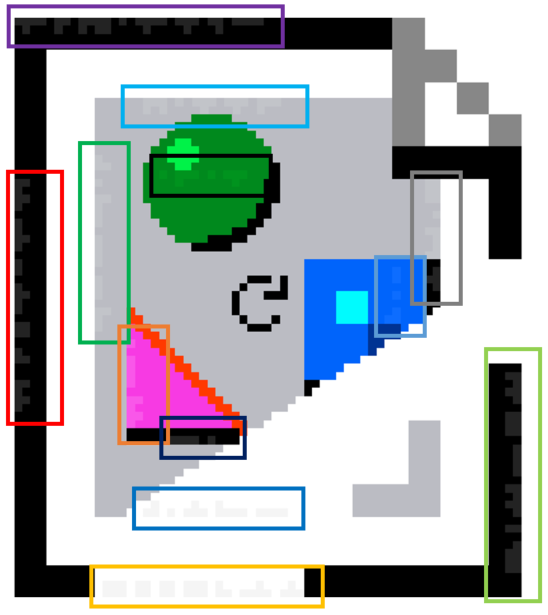 It is likely that these symbols might each decode to a letter that helps to form our wordsearch grid. Furthermore, since these symbols appear in neatly organised lines it is a further possibility that we might be able to assemble together in some way (like a jigsaw) to form that grid.

First, let's try to assemble them into a grid structure...

Noting that the longest symbol-line (circled in purple in the image) comprises 8 images, let's take that one and let it be a whole side of the wordsearch. (Since Hint 1 reveals that the wordsearch is indeed 8x8, this confirms this as a useful strategy.)

We can then squish together the remaining symbol strings, keeping them roughly in their relative positions in the diagram, to produce an 8x8 grid (with a central 2x2 hole) which looks like this: 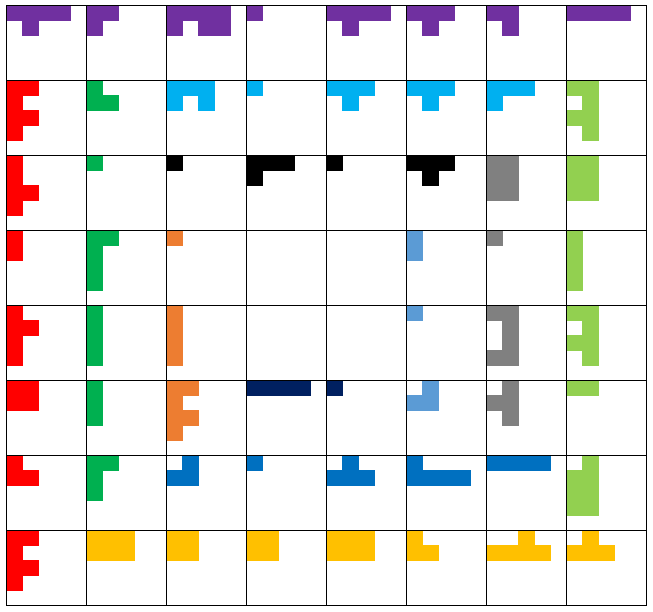 How can we read these as letters?

Well, these symbols bear a strong resemblance to the dots and dashes of Morse code, with single-pixel 'dots' and double-pixel 'dashes'. In order to extract valid letters out of them we need to read the horizontal strings from left to right, and the vertical strings from top to bottom (e.g. top left symbol is .-.. while the one immediately below it is -.-.).

Doing this for each symbol produces the following letter grid: 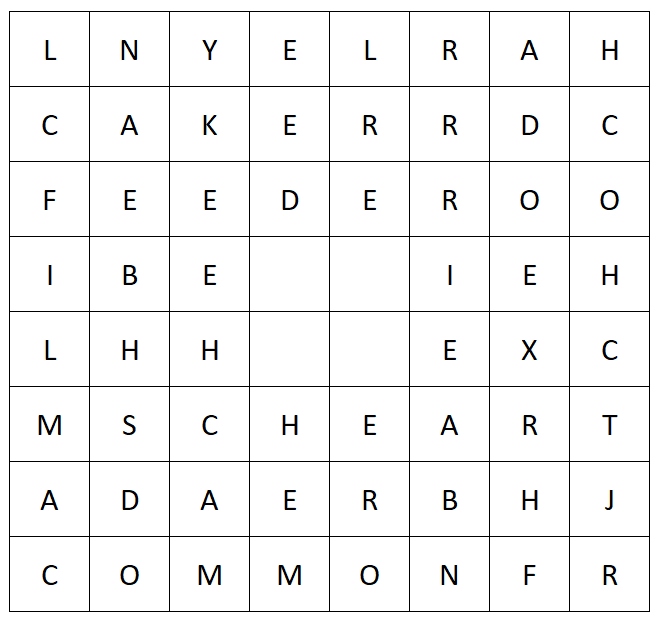 With no other segments to fill the central 2x2 gap, we need to add other letters in here - but what letters exactly?! Hint 3 suggests it is related to a symbol in the image. Well, seeing as the clockwise arrow is central to the image, it would probably make the most sense if that were the symbol of interest. The word which would lend itself best to making other words in the grid and also define the symbol itself is (to my mind) TURN, so let's add that to the grid too, starting in the tail of arrow and proceeding clockwise towards its head (as per Hint 3): 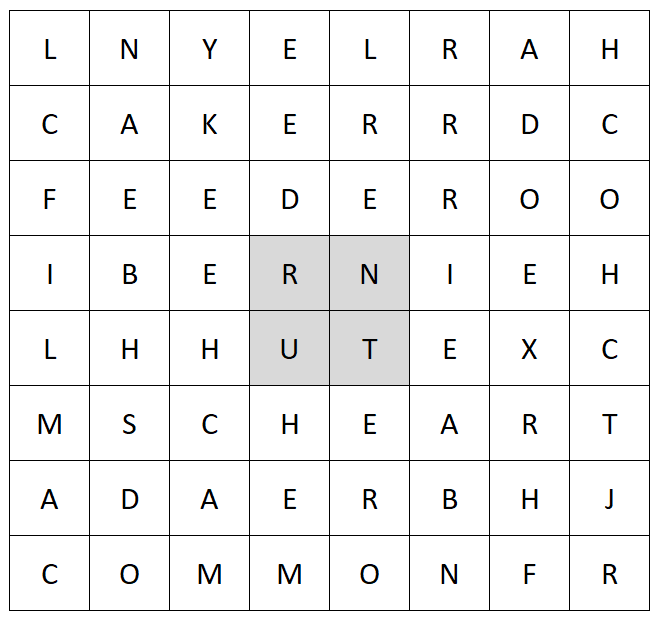 Treating this letter grid as a wordsearch, there are several words that are immediately obvious (helpfully confirming our choice of cipher), although not all of them are necessarily relevant. However, a bit of thought suggests what we should probably be looking for here...

- Hints 2 and 5 suggest there should be 13 words to find, since the wordsearch comprises 13 pieces...

- Hint 4 suggests specifically that the tenth word should be RENTER, a synonym of tenant...

- Hint 6 suggests the wordsearch theme is potentially something from popular culture - some kind of list that may continue to grow with future instalments...

Combine all of this information with the knowledge that we are looking for a final answer of the form (6,3) and I believe the wordsearch theme must be:

DOCTOR WHO, the British science fiction TV show! To date, thirteen actors have played The Doctor (in the official canon), the tenth of whom was David Tennant, and it is very probable that once the current Doctor (Jodie Whittaker) calls time on playing the role it will be given to another actor so the series can continue.

Knowing this, then, we now need to find:

13 words which relate to each of the names of the 13 actors to have played The Doctor. And here they are: 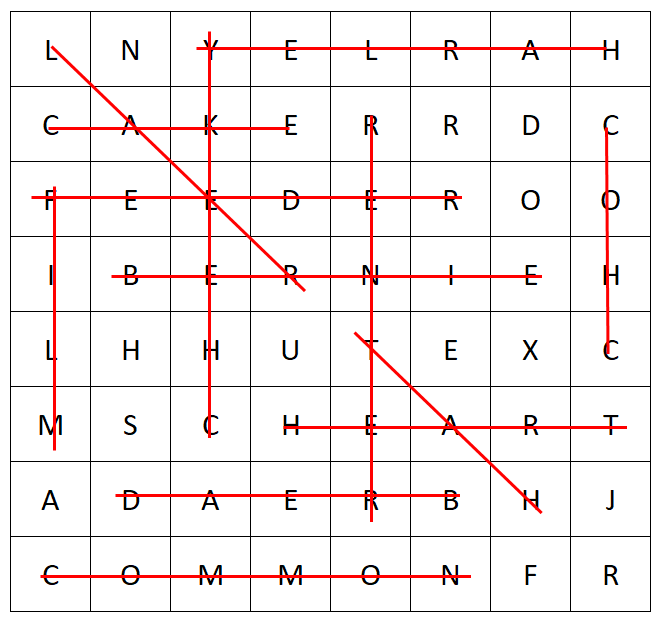 Finally, to remark on the title question:

In all likelihood, there will indeed be more actors who take on the role of Doctor Who - thanks to The Doctor's ability to regenerate their body when it gets worn out, the role is able to be passed from one actor to the next and the change in physical appearance explained away as a plot point. All of this explains why the show has been on our screens since 1963 (with some breaks) and holds the Guinness World Record for being the longest-running sci-fi TV show in the world!

Not the answer you're looking for? Browse other questions tagged knowledge enigmatic-puzzle cipher word-search or ask your own question.