Who murdered His Majesty the King?

Furious, the chief officer of London's police force stood in the foyer of the late Majesty's mansion, trying to compose himself. Sitting before him were the three suspects, Toby and Ned (whom he'd interviewed on Sunday), and Chad (whom he'd interviewed on Tuesday)... Ned was glaring at the other two.
"One of you," he began, "murdered both His Majesty and detective Dunnel."

"Can't prove it at all."
"And why not, mister Okeo?"
"Rumor has it all the evidence was destroyed, isn't that what someone saw?"
"Well, as your pal mister Arreg reported, our king was struck on the head with a blunt object. I found three possible weapons at the scene, each a tool used by one of you in your work here at the mansion: a garden rake, a horse shoe, and a ceramic dish. Dunnel, our detective, had brought them into mister Okeo's storeroom this morning and in studying them, determined which was the murder weapon used on the king's temple. Right after, someone entered the room, murdered him, and destroyed the weapons before he could make his announcement public. Nonetheless - and don't smirk - in his foresight, our Vip detective had written down which weapon matched the wound area."

"On the detective's body," he continued, "we found this note tucked in his cap. Keeping true with his reputation, he'd written on it in his secret code he calls 'fini'."
"Nonsense... it's all scribbles!" scoffed mister Elbas in a rant.
"Murderer," muttered Ned from his sofa.
"Ned, you're all suspects... especially you... there is more to tell."
"Except on Wednesday I heard something," cried Ned, "mister Elbas discussing secret plans with the Austrians and Russians!"

"And so the case is solved," continued the officer, ignoring him. "Zany as these scribbles look, they tell me what the detective learned. Unlike the weapons, the murderer didn't think to destroy the note, thinking it nonsense. This means we know which of you murdered the Majesty and my detective."
The three shifted uneasily.
"What? You lie!"
"Unfortunately not, Toby. Written on this note is the name of the murder weapon. Yes, the murderer is..."

Originally I was worried this was too easy so had altered two words before posting, to increase the difficulty. One of them has been restored.

To continue the work of Thomas and Gareth, I think the murderer is ...

Gareth found out that ...

... we need to look at the capital letters in the story. These letters are:


We can group these letters into pairs: That looks like a list of U.S. states. I first thought that we should look for the capitals of these states, but we have to "follow" them in another awy. The states in each group are close to each other: The first group are in the south-est, the second group are in the west, and so on.

... trace these states on a map. With the state capitals as anchor points, it looks like this: 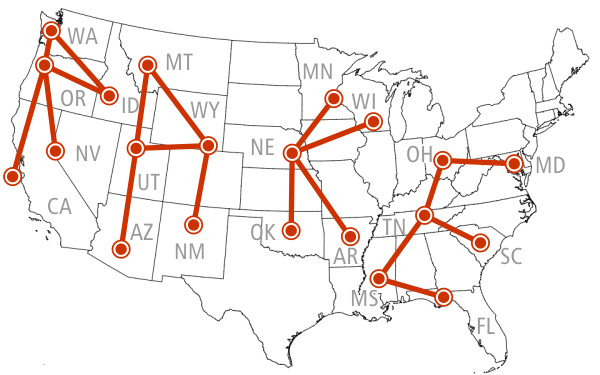 Thomas found out that ...

... the names of the suspects are anagrams of their professions. The rake would go with the gardener, Ned Arreg.

When I first traced the letters, I missed the line

and therefore the lower right stem of the A that ends in New Mexico. An alternative to draw the A is to go to Colorado in the last step, which would have made the murderer Chad Okeo, of course. I like this idea, but New Mexico is right there in the note and going to Colorado after that would just create an awkward swoosh.

Though this note doesn't answer the question, it provides clarity:

In the puzzle, all three names and surnames are mentioned, as well as the tools of murder, however there is no proper correspondence between them. However, their names are alliterative and can be found:
Stable boy Toby Elbas
Gardener Ned Arreg
Head Cook Chad Okeo

Now, the next answer is definitely wrong, but I like it too much to omit:

The murderer (as repeated in the question, and once by Ned) might be someone with similarly alliterative name. How about... Mr Duerer?

name of the code is "fini", suggesting looking at ends of things.

look at the last letters of sentences (all of them, not e.g. just those uttered by the policeman) we get: FOLLOWTHECAPITALSMDEEYTEYNS. I can't make anything of the last bit, but the first part suggests that we should look for either capital letters or capital cities.

the capital letters give us, paragraph by paragraph, FLMSTNSCTNOHMD CAORWAIDORNV OKNEMNNEWINEAR AZUTMTWYUWY and the letters following them give us UOAIOEUHUENIAU ANKUERFUKIOI NEOLUEEXEHELUU NANHAHHONRE, none of which seems promising (e.g., none of it becomes obviously meaningful under ROT13 or any other ROTn, I don't see any obviously-solvable anagrams, I don't see anything that looks much like (GARDEN) RAKE, HORSESHOE or (CERAMIC) DISH, and neither sequence of letters seems to be a simple-substitution cipher making anything useful)

we might be looking for names of capital cities hidden in the text? London is there, of course, out in the open in the first sentence, but there don't seem to be any others at all. Two countries are mentioned, leading to capitals Vienna and Moscow (or Wien and Moskva) to go with London, but I don't see how to get a murder weapon out of those either.

I think maybe I solved it. I'm not sure, if it's not right, please say it.

Mister Elbas said, "Nonsense, it's all scribbles." How could he know that, if he didn't see how the note looked like?

Not the answer you're looking for? Browse other questions tagged cipher story steganography geography anagram or ask your own question.

3
A picture of Gaspard Monge
4
Murderer, Car and Colour
23
Who killed Professor Cal?
4
The Cryptology Case
5
Can you find the killer?
0
Who was the murderer? 550971051
38
Who killed Tom?
7
Who killed Professor Thomas Eyebright, and why?
6
The Death of Violet Hunter
5
Locked Room Murder!! How and who?