The last Density™ puzzle (here: Density™ finally back from holiday!) proved that OP plays too many games, so we went ahead and created a game of our own!

Where is our fictional game taking place? 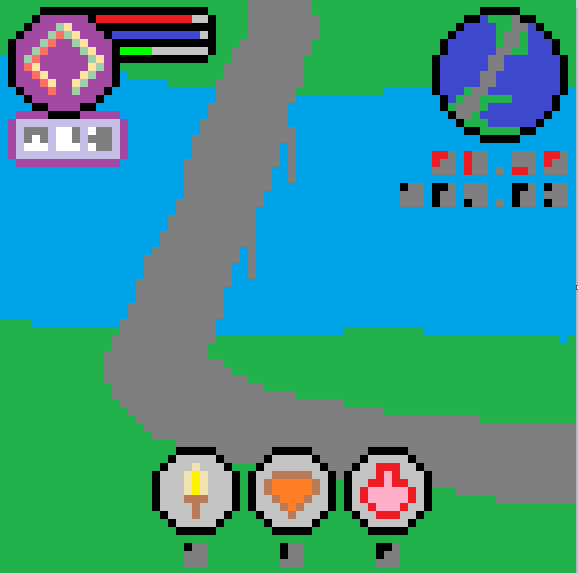 I think this is

the bridge and its immediate environs in the circle at top right, and (in a rather different view) in the large image -- though I'm not sure what view would show you the curve in the southern road without also showing the protruding jetty/pier/whatever-it-is that's visible in the inset. Maybe it's a post-apocalyptic game set in a future where that jetty/pier/whatever is underwater? [OP clarifies that this is just a minor inaccuracy in drawing and not significant.]

The 3x3 grids are

which we may explain

by supposing that cells in the first two rows count 1 and cells in the bottom row count 4, but as we'll see that's not exactly the right rule.

The grids at top right

give northings and eastings; the northings are red because they are negative, New Zealand being in the southern hemisphere [citation needed].

Now, what about the 3x3 blocks at top left?

It seems likely that they say PSE somehow. The third is a 5, strongly suggesting A1Z26, and I think the intended rule is that the scoring goes as follows:

the blocks indicate the numbers 16, 19, 5, which is exactly what we need to make PSE. (Note: in the original version of the puzzle there was a minor error that made this not quite work, but it's been fixed now.)

The bars at top left

look like they measure 12, 11, 4 pixels respectively. Again A1Z26 yields nothing useful (LKD) and if there's useful information here I'm failing to see what it is. [OP clarifies in comments that they're just window-dressing.]

Gareth McCaughan is 100% correct, but I made a mistake on the original post of the question - to clarify the number system, my notes from making the puzzle are below

The symbols below the "planet" correspond to coordinates in the real world. I haven't found the pattern to generate all the digits, but given the ones at the bottom (the "inventory" to call it some way), it'd need to have a structure like:

Considering possible coordinates, I'd say it is somewhere in Japan, probably inside or near Tokyo (whose approximate coords are 35.690, 139.690)

Not the answer you're looking for? Browse other questions tagged enigmatic-puzzle cipher steganography or ask your own question.