The Hand of God

This puzzle is dedicated to the great Diego Maradona.

Maradona has the ball and is going for an amazing run. He must get around all his opponents and score the ball into the goals (gray cells). At each turn he can do the following:

Maradona cannot move outside the grid and his opponents do not move (they are too slow to react!). What is the least number of turns required for Maradona to score? 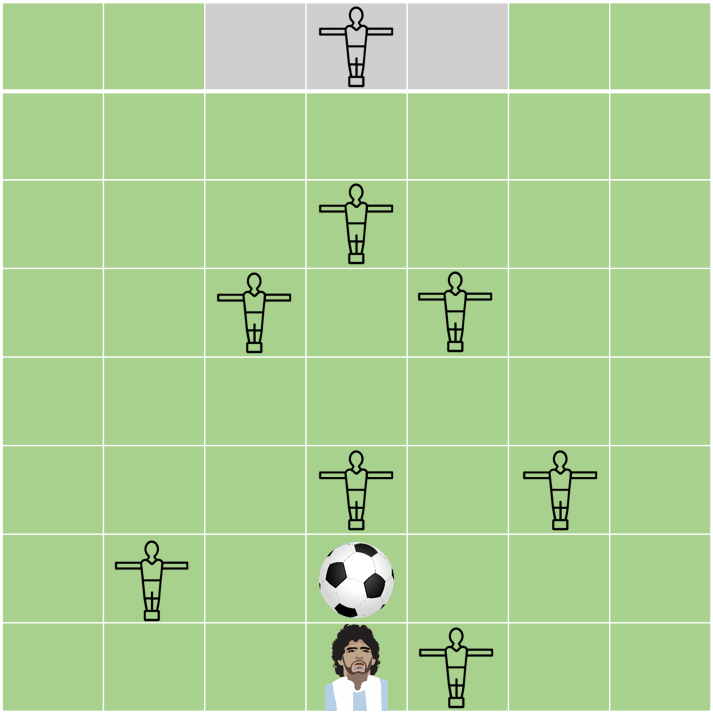 where the paths are (describing the ball's movement in NSEW; Maradona's moves are implied between direction changes, where he has to move without moving the ball)

Maradona can't pass through the right side, so the only possible paths are through the left side of group of 3 defenders, or through the middle by moving NE.

the starting move must be moving the ball in W direction, and six more moves are needed to move the ball forward, and we can't avoid having at least four direction changes. I don't have a nice proof that 12 moves is the minimum, but for all paths I tried so far, paths with four direction changes (turns) all required a turn with +2 moves, and the others required five turns.

If I undersood the rules correctly, 9 turns.

All moves are with the ball.

The other answers are spending moves making maradona move without the ball but it don't see the point. There's nothing specifying maradona can't move diagonally, while the ball also moves diagonally. He can move into 8 neighboring cells and the ball can do the same.

Not the answer you're looking for? Browse other questions tagged pencil-and-paper-games or ask your own question.

7
How many squares can you find in the picture?
2
Coins in a row, without the usual restriction
6
Can you draw a path visiting the numbers in order without crossing itself?
8
A “Find the Path” Puzzle
8
Another 'Find the Path' Puzzle
3
What is the fewest amount of clicks needed to create a tier 5 tile?
17
Match the blocks
7
The Wee County begriddled puzzle
6
Eat all the circles MAZE