A theorem about angles in the form of arctan(1/n)

There is a famous classical geometry puzzle about the angles formed by integer coordinates:

What is the sum of angle A and B in the following image? Do not use any advanced mathematics such as trigonometric formulas or complex numbers.

with an elegant answer using pure geometry (spoiler-ed for those who want to try out themselves):

Now, we consider a general problem involving angles in the form of arctan(1/n), which is the smallest angle formed by a right triangle of height 1 and width n (an integer). For example, the angle A in the above image is equal to arctan(1/3), and B is arctan(1/2).

Prove or disprove the following statement:

Given two angles α=arctan(1/n) and β=arctan(1/m) where n and m are integers, it is possible to draw three triangles ABC, DEF, and GHI on a Cartesian plane, such that all vertices have integer coordinates and the following conditions are satisfied for each triangle:

Here is a constructive proof.

I am using the fact that in the space of Gaussian integers (complex integers) multiplication represents an angle-preserving transformation.
Triangle ABC can be created easily by setting A=(0,0), B=(n+m,0), C=(n,1).

To find triangle DEF, consider CAB in the complex plane and multiply it by -n+i.
DE ends up aligned with x or the real axis by construction.
Likewise, to find triangle GHI, multiply BCA by -m-i.

Yes, the statement is true. 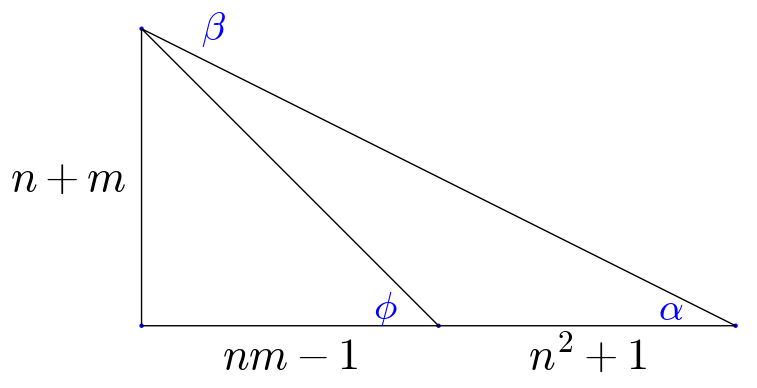 Not the answer you're looking for? Browse other questions tagged mathematics geometry number-theory or ask your own question.

10
Ernie and the Geometric Ginger Cookies
16
The Square's Center
21
Five Angles in a Star
16
Fermat's Last Theorem - or is it?
4
Professor Halfbrain's quadrilateral theorem
41
The Non-Pythagorean Theorem
16
Yet another adventitious triangle
5
How can I cut a cube so that all its vertices except for two mutually opposite vertices are equally distanced from the plane of the cut?
8
Taping a cardboard square is getting me fired!
9
Ernie and the Cuboidal Crystals