Light and Shadow: Equal and Antisymmetric

This is an entry for Fortnightly Topic Challenge #44: Introduce a new grid deduction genre to the community

Light and Shadow is a puzzle where you divide the grid into regions painted either white or black.

Rules of Light and Shadow:

Here is an example puzzle with its solution. 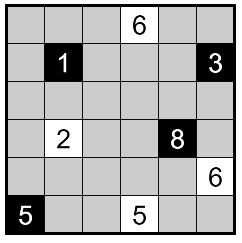 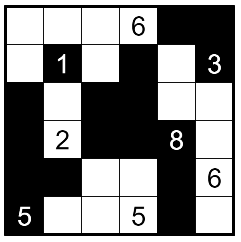 Shown below is the actual puzzle you have to solve: 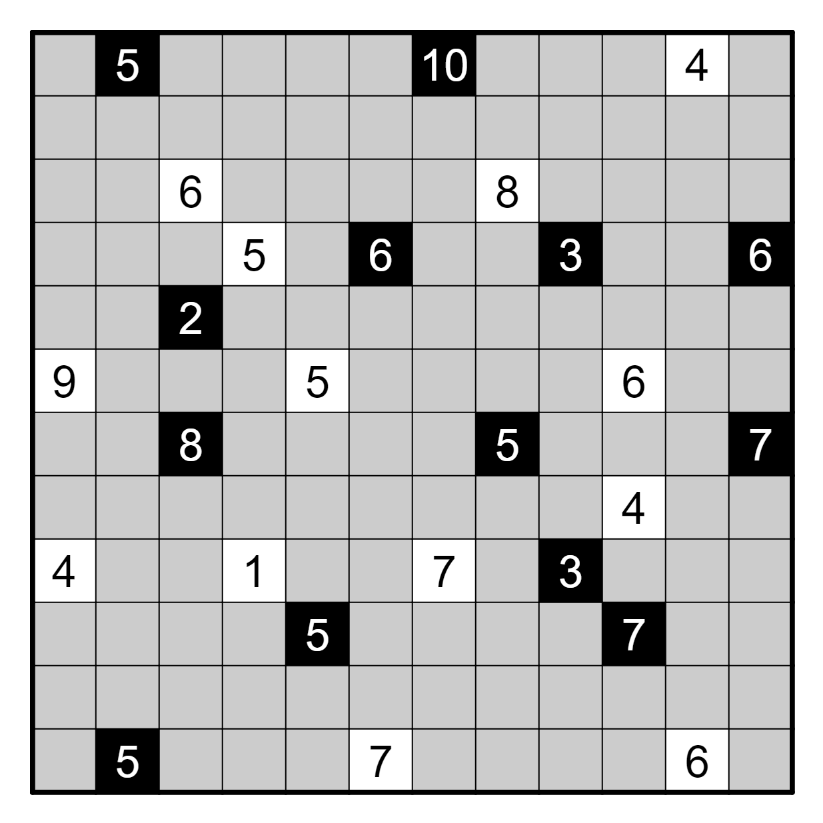 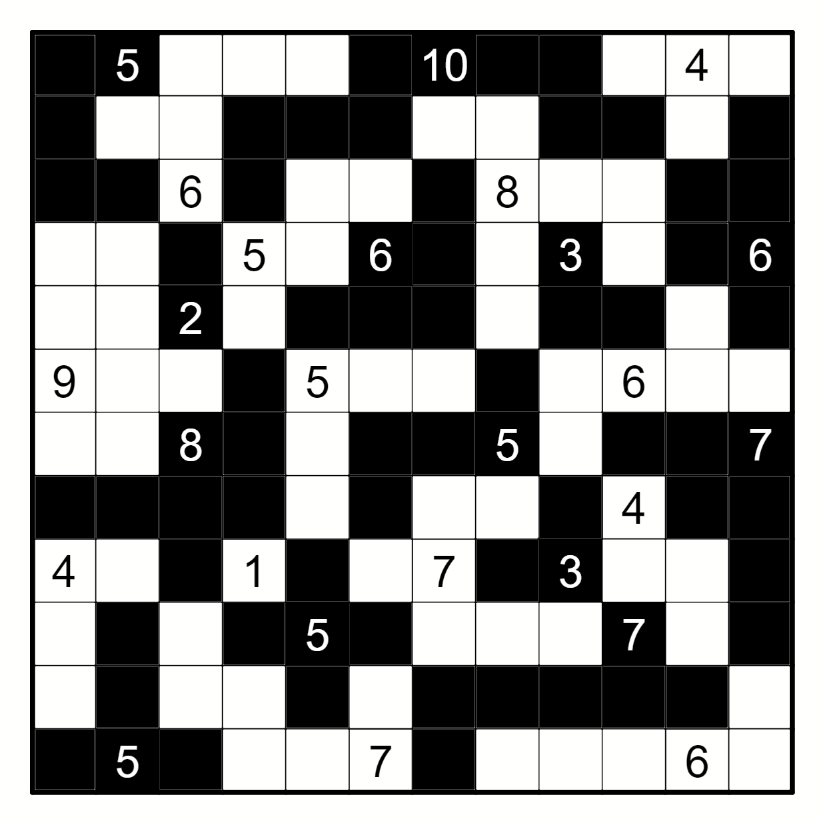 Solving process, as best I can reconstruct it: 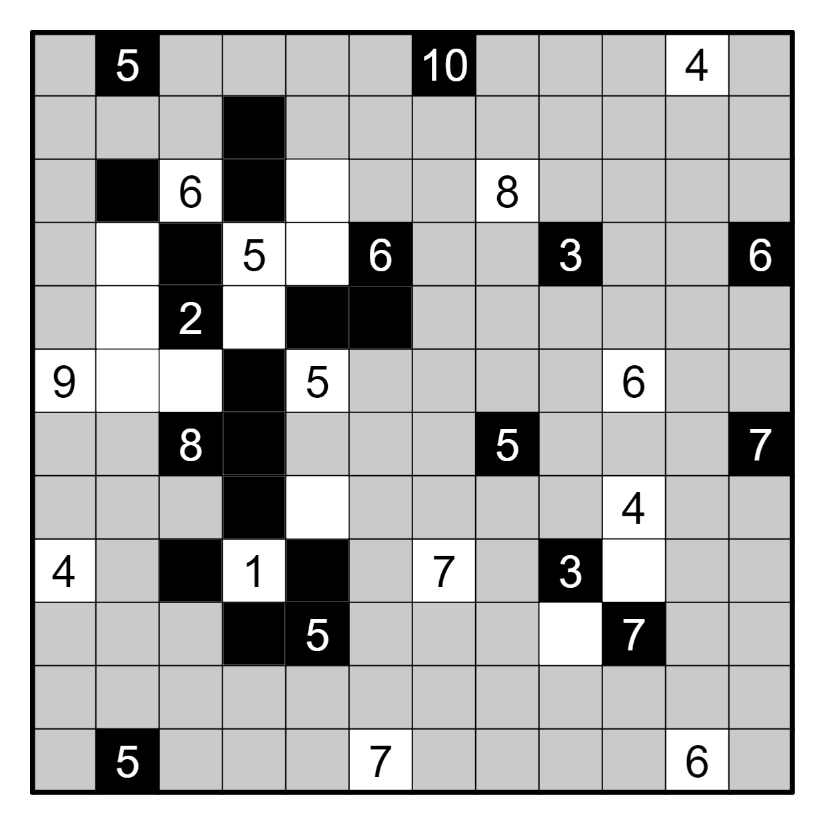 White 6 near NW corner extends up. It can't extend more than one westward since it would cut off the black 5, so it goes to the N edge and then at least two squares eastward. The nearby black squares that are being surrounded must extend outward. White 5 near the NW extends one further out, is then complete, and must be surrounded by black. White 9 at the west must extend at least one further up (in fact it could have been two, but I miscounted) because the black 5 can only reach so far. Black 3 east of centre must extend westward (not enough space to the north). Black 5 and 3 east of centre must be separated by white. White 6 and 4 east of centre must be separated by black. 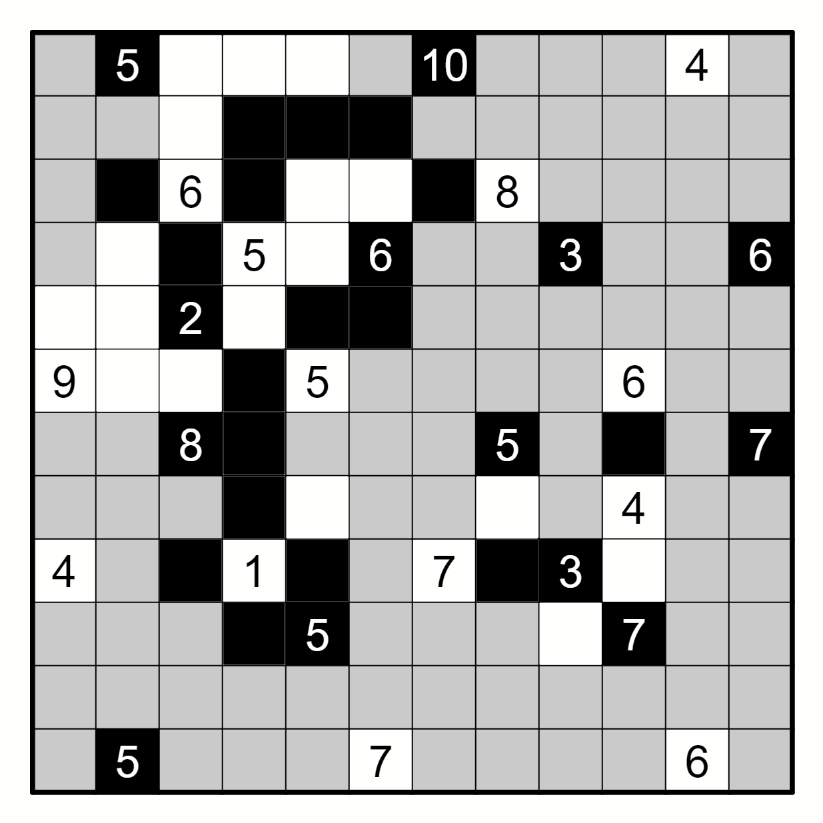 The unfilled square above the white 9 must be white, since there's no way to connect up the 5 sensibly otherwise. At this point I think I made a wrong inference whose conclusion happened to be correct -- I thought the only way to finish the NW corner was as shown in the next image. There is on the face of it another possibility: the 5 could be a P-pentomino, the 6 could extend one space further E along the N edge, and the 9 could extend one space further up. This is in fact impossible -- separating the 9 from the 4 below it then requires too many black squares that would have to be part of the 8 nearby. 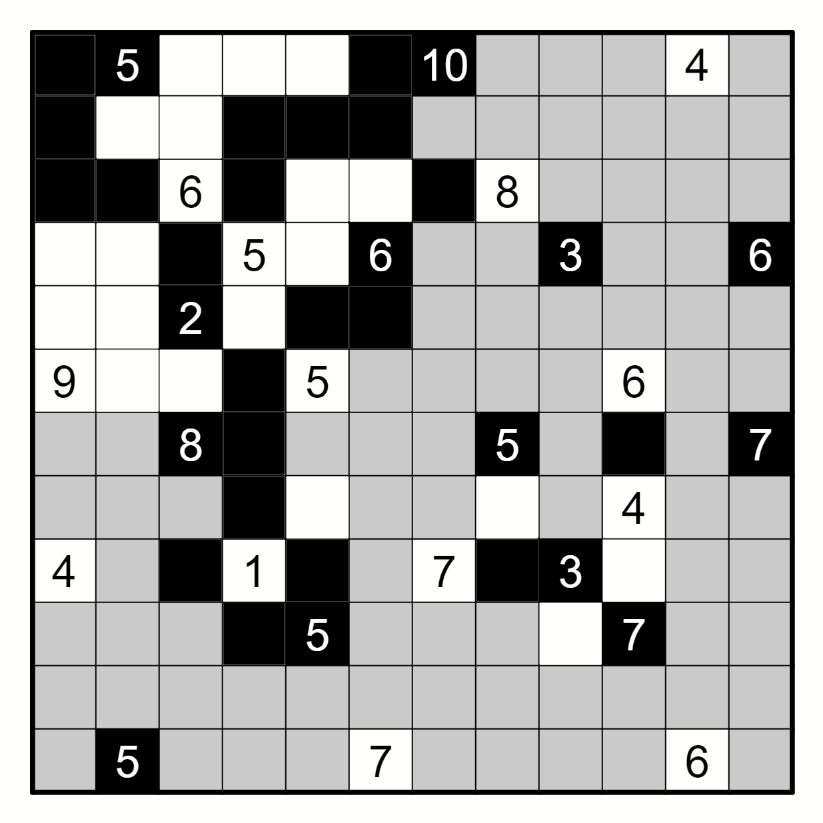 The white 4 and 9 on the west edge must be separated, which can only by done by the nearby black 8 and only allows the 9 to be completed in one way. This completes the 8, which must then be surrounded by white squares. 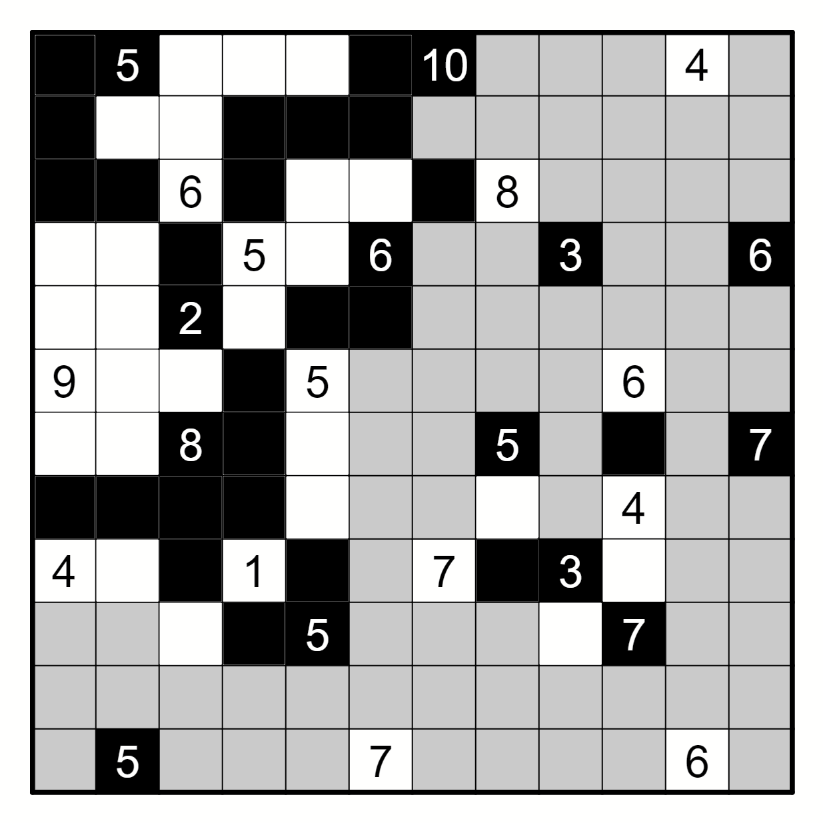 Can that isolated white square in the SW corner connect to the 4? No, because then we get too many black squares connected to the 5 at the SW. So it connects to the 7, which also determines what happens to the 4 and 5 in that corner. 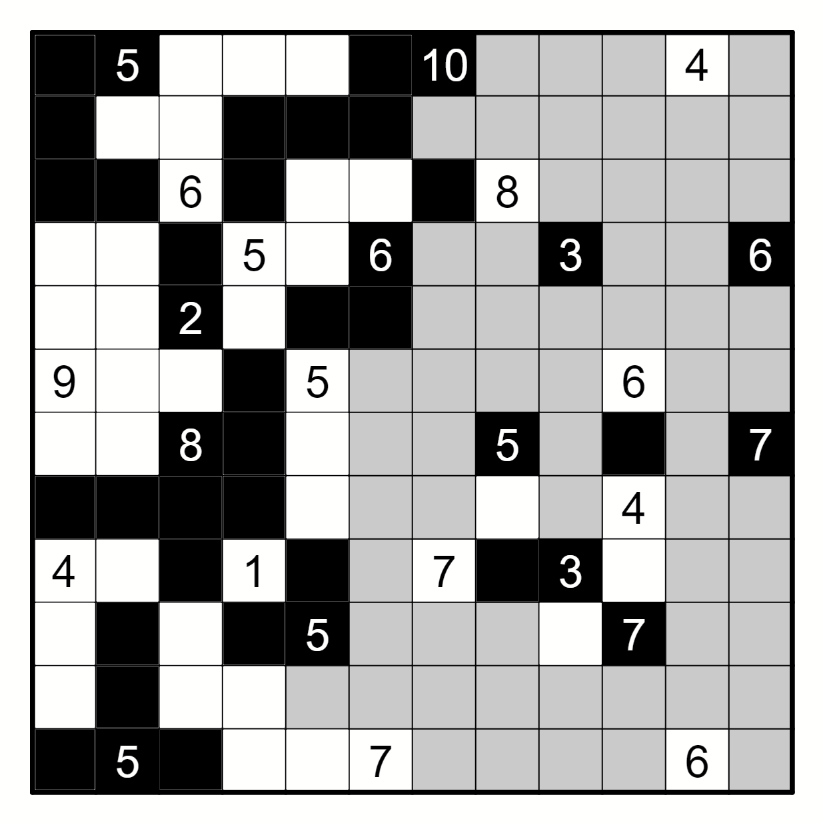 At this point I think I explored what would happen if the black 3 a little SE of centre extended downward rather than upward, and got a contradiction after filling maybe a dozen squares with easy deductions. There's probably a neater way to do it :-). Anyway, it turns out it has to go upward, and then we can surround it with white squares. 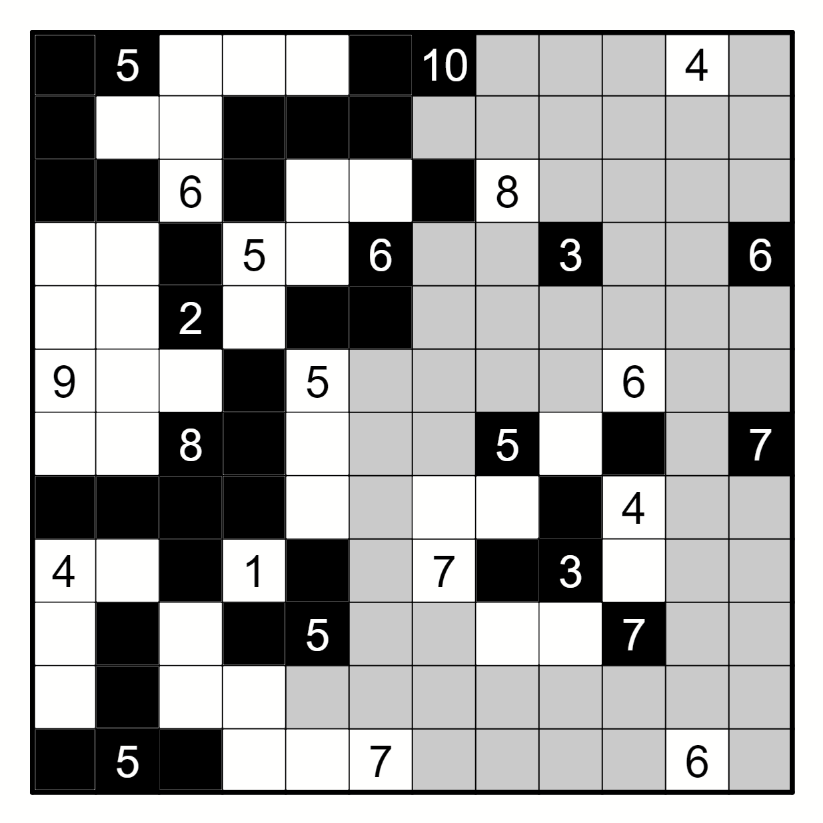 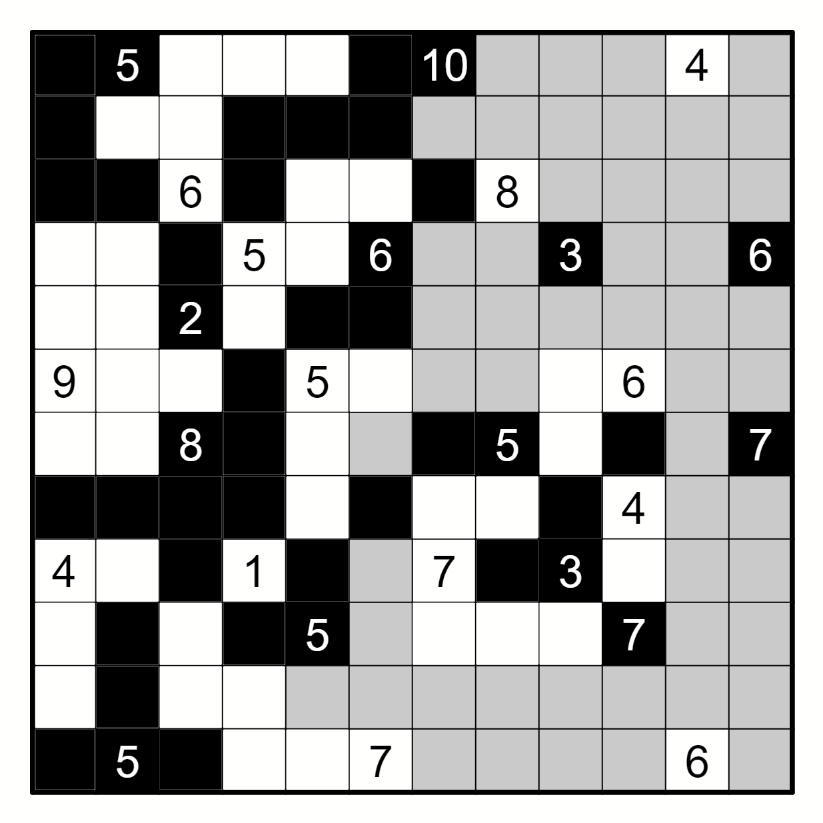 Which 5 does that isolated black square connect to? The one on the right, which otherwise doesn't have enough squares available. 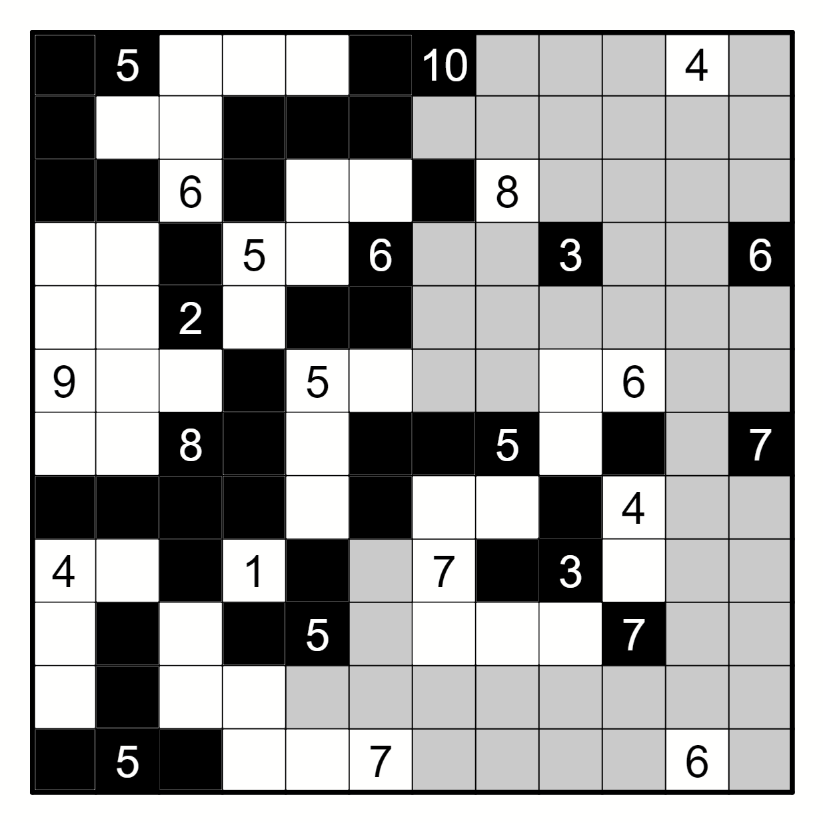 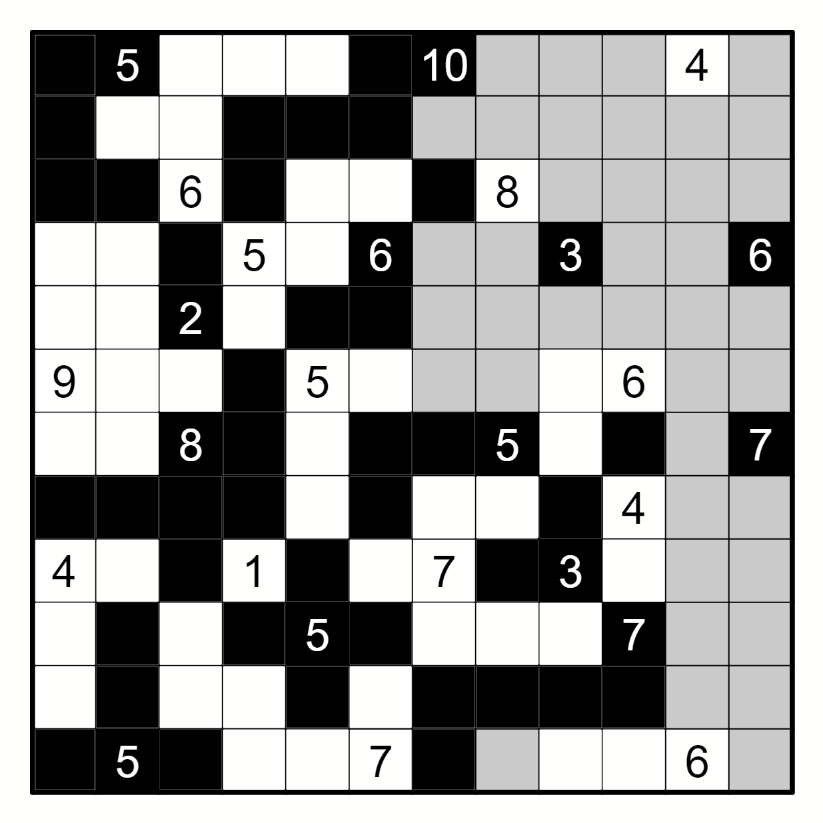 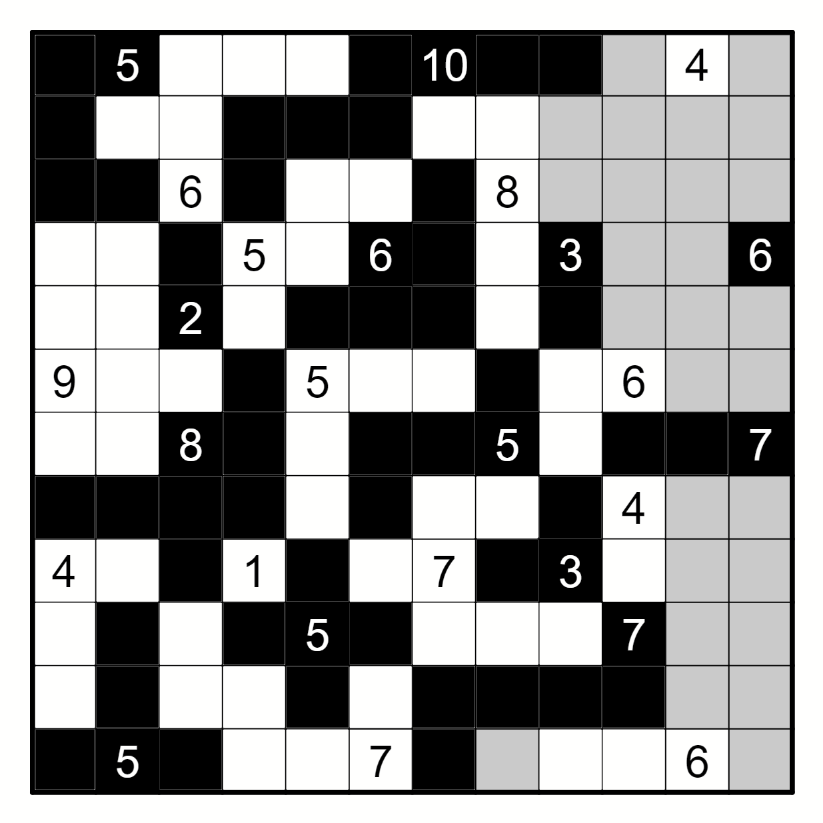 Look at the NE region and count. The 10, 4, 8, 3, 6, 6 have enough cells between them to fill that region. So the 7 just below can't extend into this region, so we can fill in white along its border. Now, of the 3 unfilled cells above the white 6, one of the western two must be white because otherwise the 3 is too large, so the rightmost of those 3 cells is black. 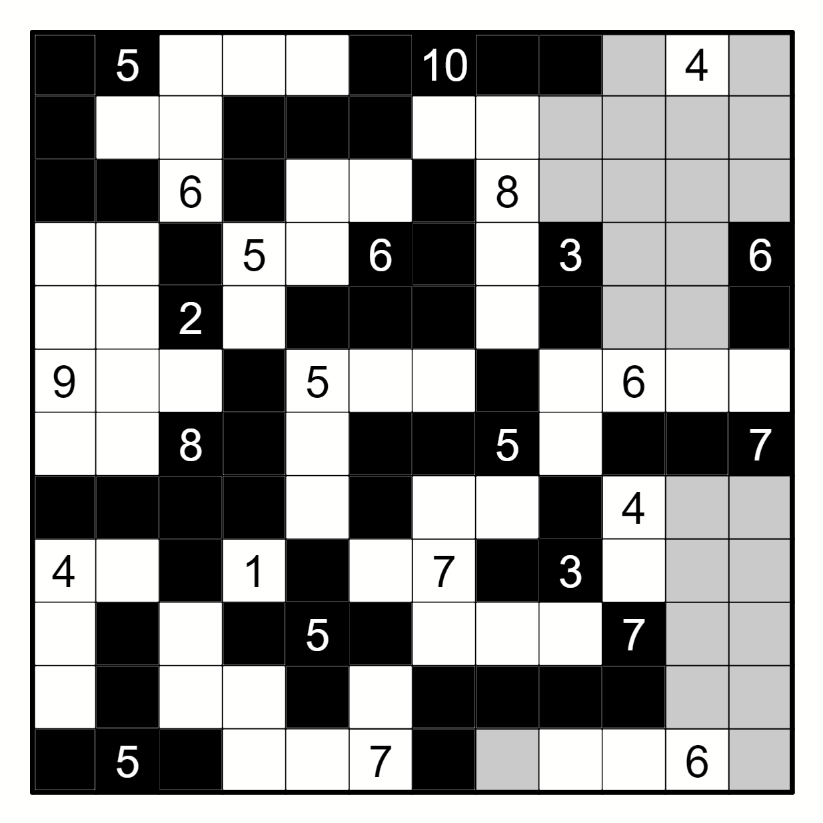 Now that 4x4 unfilled block below the upper 7 contains at least one white square, so at most three black ones, so the square 3 down from the upper 7 must be black. The square left of that is white for separation from the other 7. Can it join to the 6? No, because then the 4 cuts off two pieces of the upper 7. So it joins to the 4, and the rest of the SE corner follows easily. 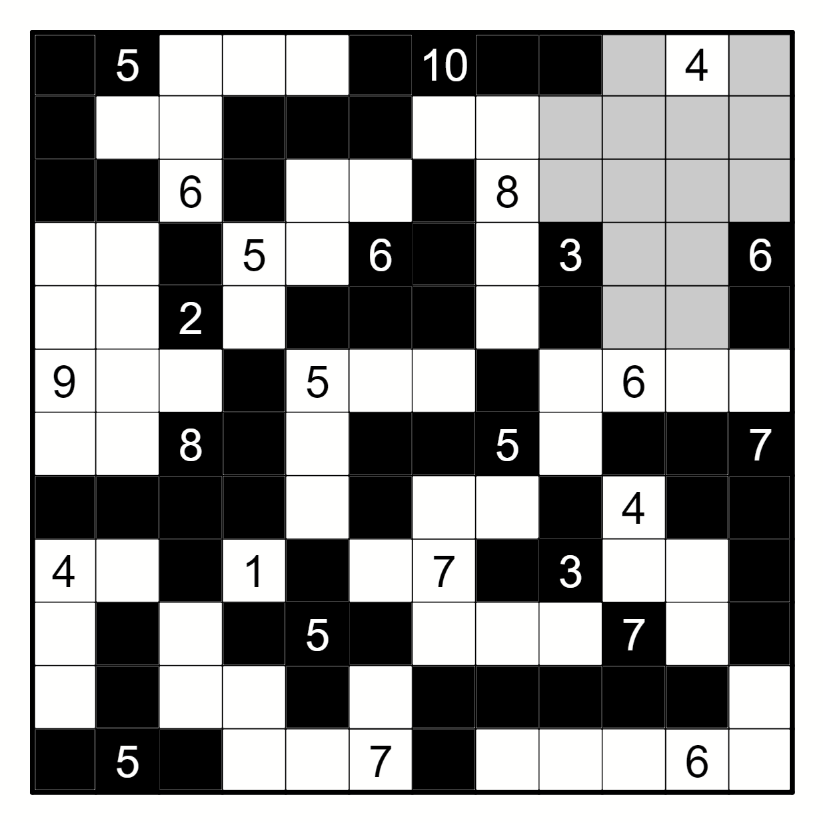 The 10 must extend E then S or S then E, giving us a black square SE of it either way. It can't go any further S or E from there, giving us two white squares adjacent to that one. The S one of those must connect to the 8 (which otherwise doesn't have enough space) while the E one is already connected to the 4, so there's a black square separating them. 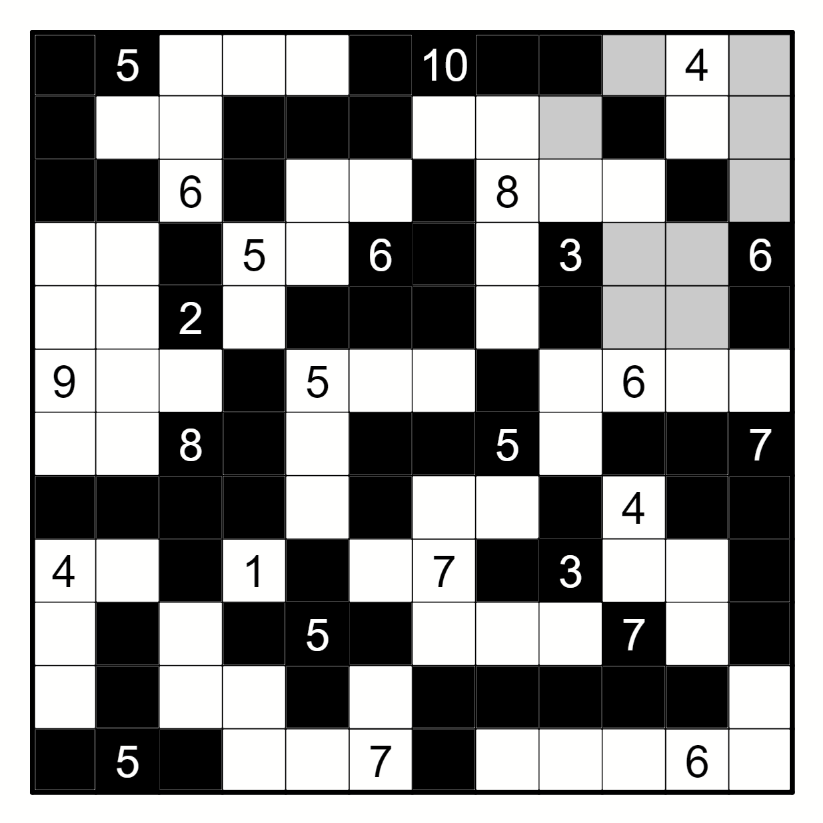 Now the 3 and 6 have to be separated, which has to be done by a diagonally-adjacent pair of white squares. If they're NE and SW then the NE one is disconnected and unnumbered, which is no good. So they're SE and NW, and the rest is routine.

9
Nurikabe: Sixes
16
Nurimisaki Puzzle: Introduction
17
Norinori: QR-Code-ish
12
Dosun-Fuwari: an introduction
7
Palette: A Multicoloured Grid Deduction Puzzle
17
Sashigane: The Fives Have It
14
Greener Grasses: Around the Trees
13
Nurikabe: A Gentle Walk in the Hall of Giants
8
Nurikabe: Five Below
9
Nurikabe: The Terrible Tower of Threes!