Greener Grasses: Around the Trees

Greener Grasses is apparently a new genre of grid puzzle. Pitched by Joseph Howard and executed by a friend of mine, Ivan Koswara a.k.a chaotic_iak. This was first appeared in 24-Hour Puzzle Championship 2018 and lately revived in Ivan's 25 Years in Logic Masters India last month (November 2020).

When I first trying to solve this genre, it took me a long time until I grasped the idea and then hooked to explore more of this genre. Stated by Ivan in the 25 Years, the number of published Greener Grasses puzzles apparently can be counted on one hand. So here I am, trying to pick this one up as I do believe the genre has a great potential~

Also, as this is the entree on the genre here, I write this in a "classic" way (with... a supposedly-not-too-hard difficulty...) I personally recommend you to check the puzzles in the 25 Years to see how neat this genre can be! :) 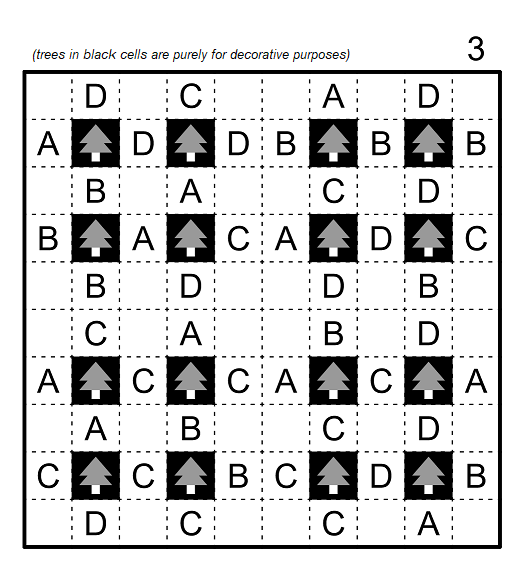 I'm using the penpa editor so the trees are gone unfortunately...

Starting at the bottom left, we can make some observations. If we were to form a 3-cell group with D in R10C2 using R10C1 and R10C3 (solo D), then the C in R9C1 would be forced to join up with either the A in R7C1 or the A in R8C1. In either case, it would be forced to share an edge with a 3-cell group containing "AC" or a single 'A'. So, this runs into a contradiction.

If we were to form a 3-cell group with D without using the cell R10C1, then a "DC" group would be forced to align with a single "C" group, which is again a contradiction. Therefore, the D in R10C2 must join up with the C in R9C1. Avoiding contradictions, we get here: 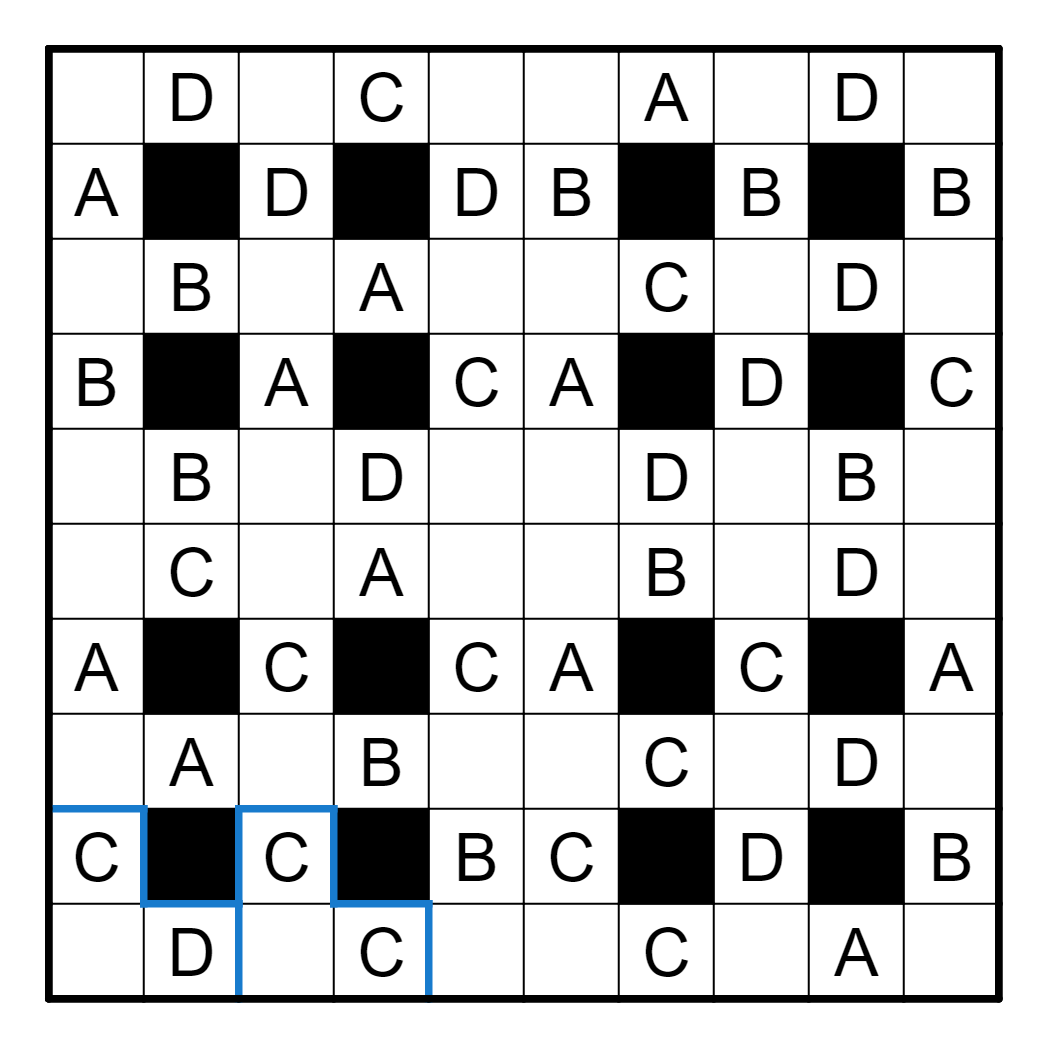 Then, notice the two "A"s in the lower left must join up together. Otherwise, we get groups of 3 sharing an edge where both groups have the same amount of As. For similar reasons, the cell R8C3 must include both C and B. 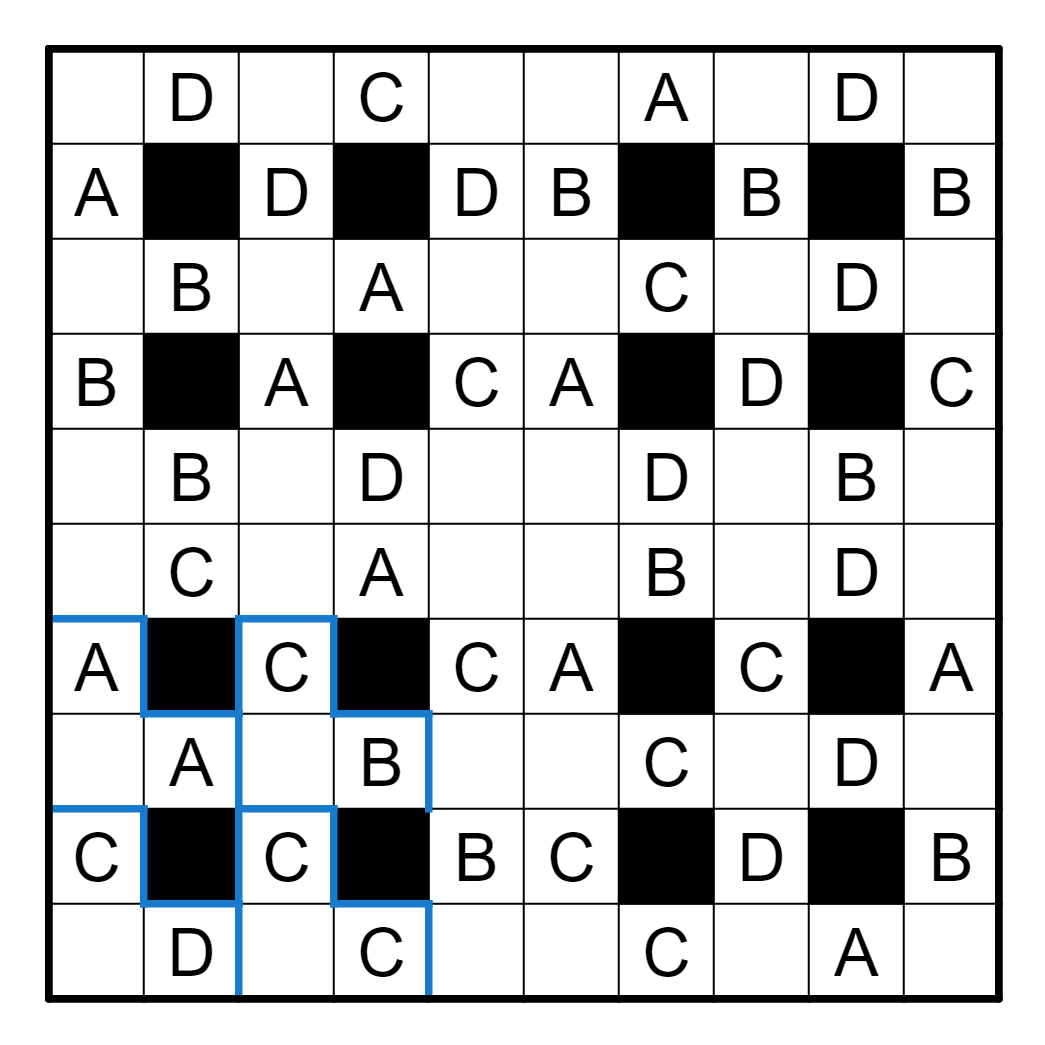 The cell R10C5 must include 'B'. Otherwise, it would be forced to group up with a 'C' and it already shares an edge with 2 Cs. After joining, the B cannot extend upwards and neither can it join with the C next to it (Otherwise, the C in R10C7 would share an edge with it). Therefore, the last cell of that group must be R10C6.

After that, the cell R10C8 cannot join up with the D in R9C8. Otherwise, the cell in R8C8 would share an edge with same letters. Therefore, it must join up with A in R10C9.

With this, we can finally make some knock-on deductions and solve the bottom part of the grid. 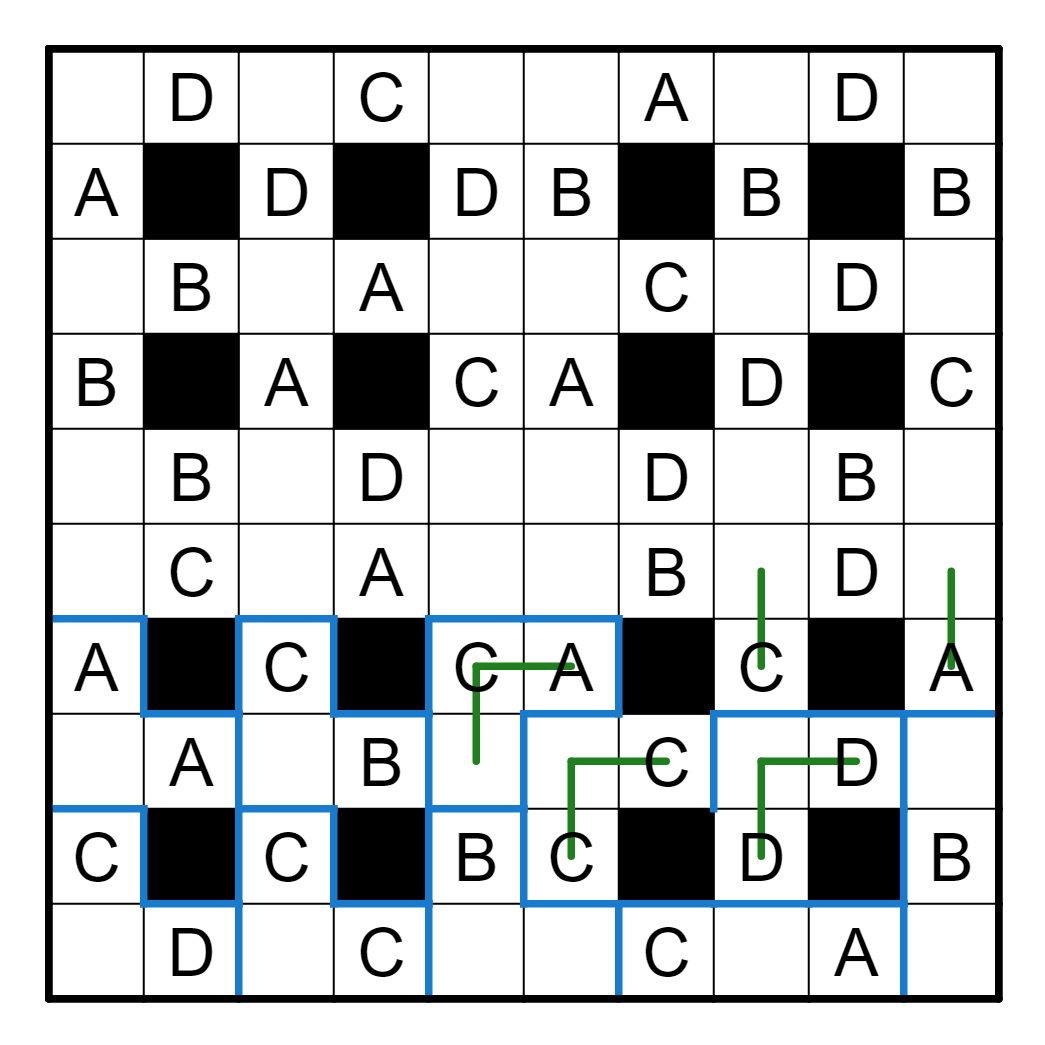 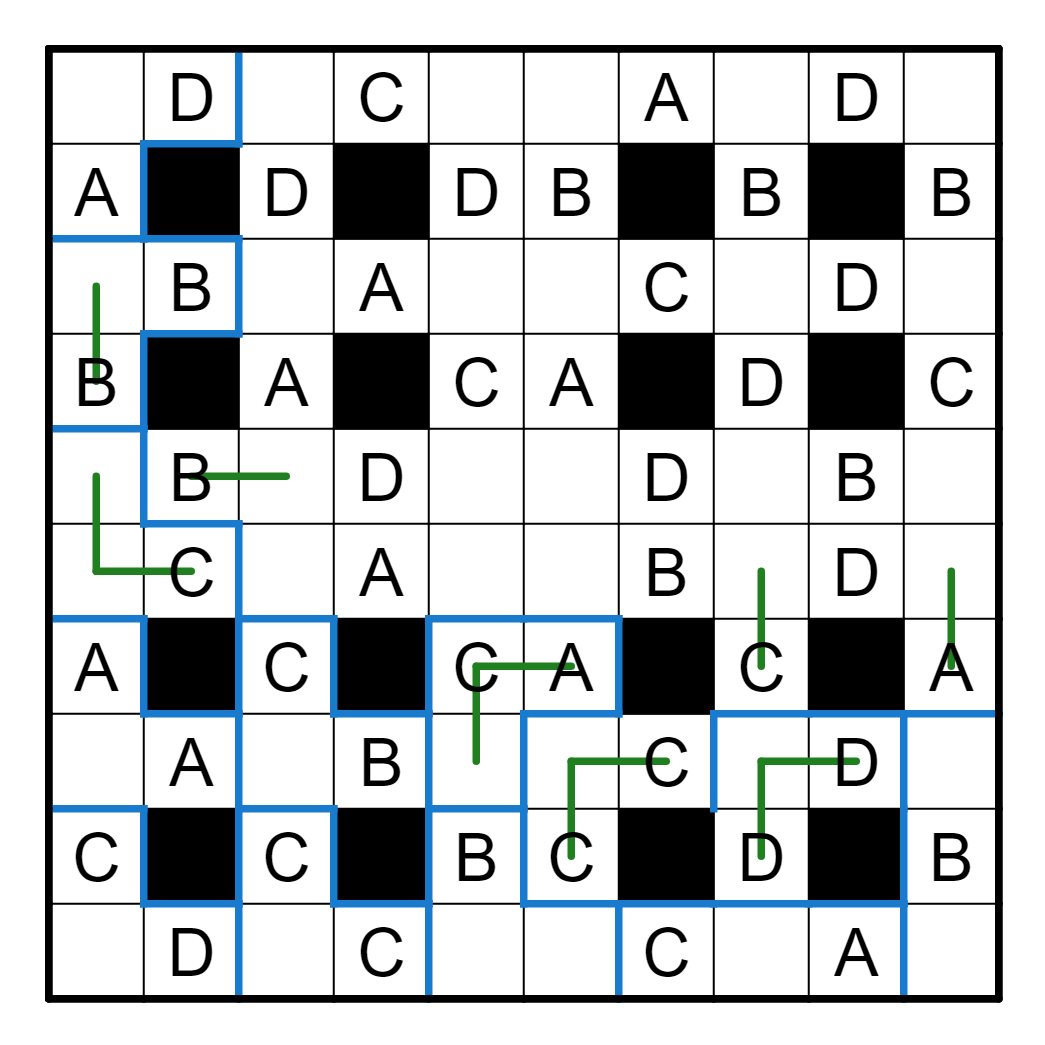 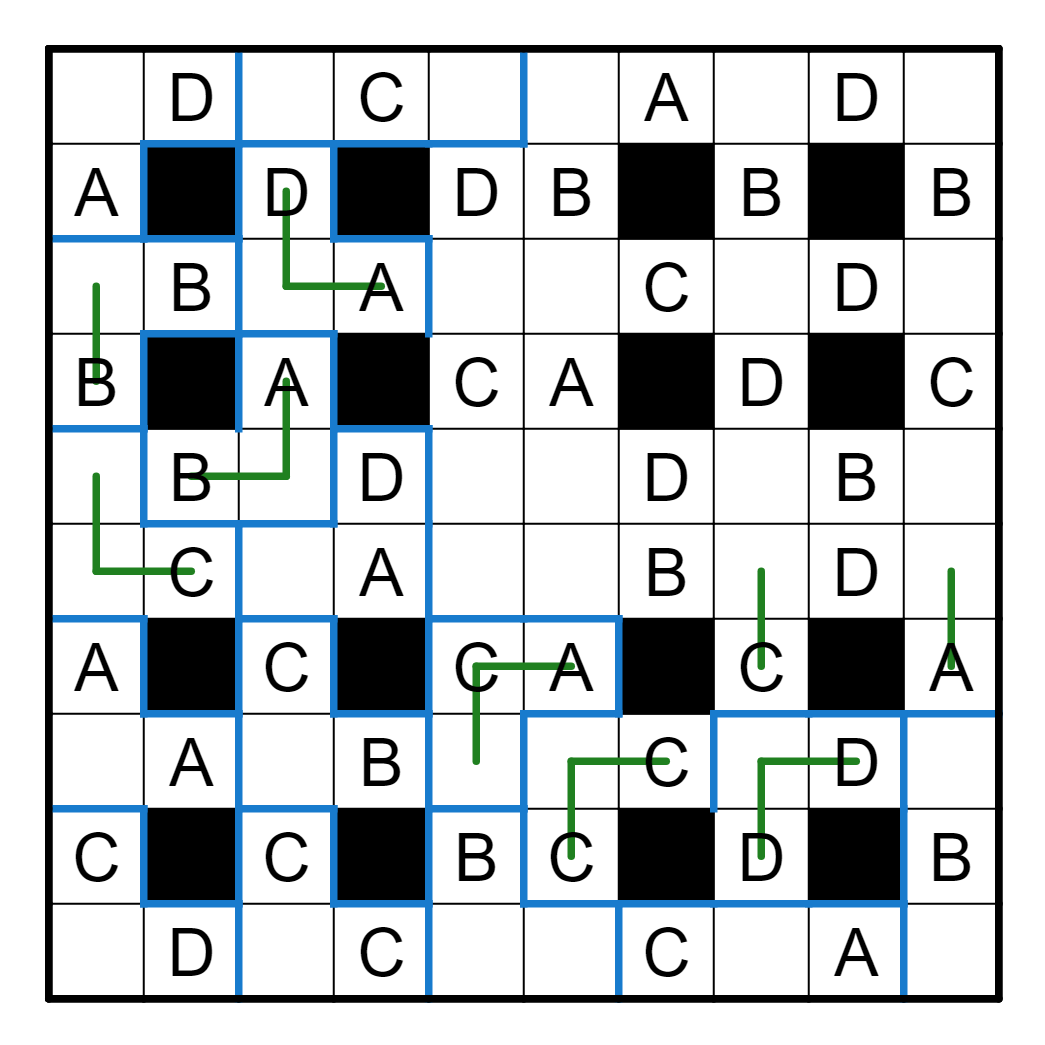 Now, the cell in R6C5 cannot go up. It would either be forced to join with C (a contradiction) or be an empty group. Therefore, it has to join with the B in R6C7. This means the cell R5C5 must be connected to the C in R4C5 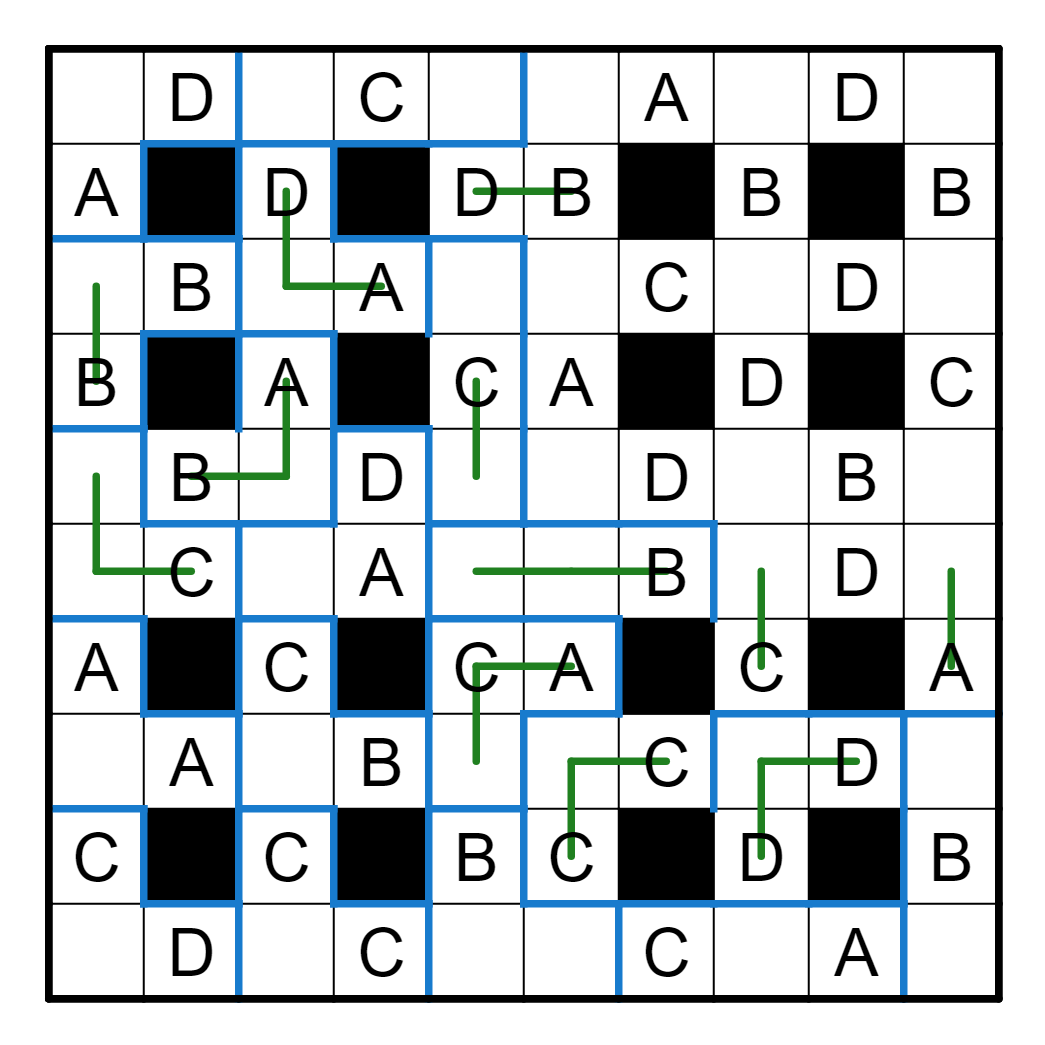 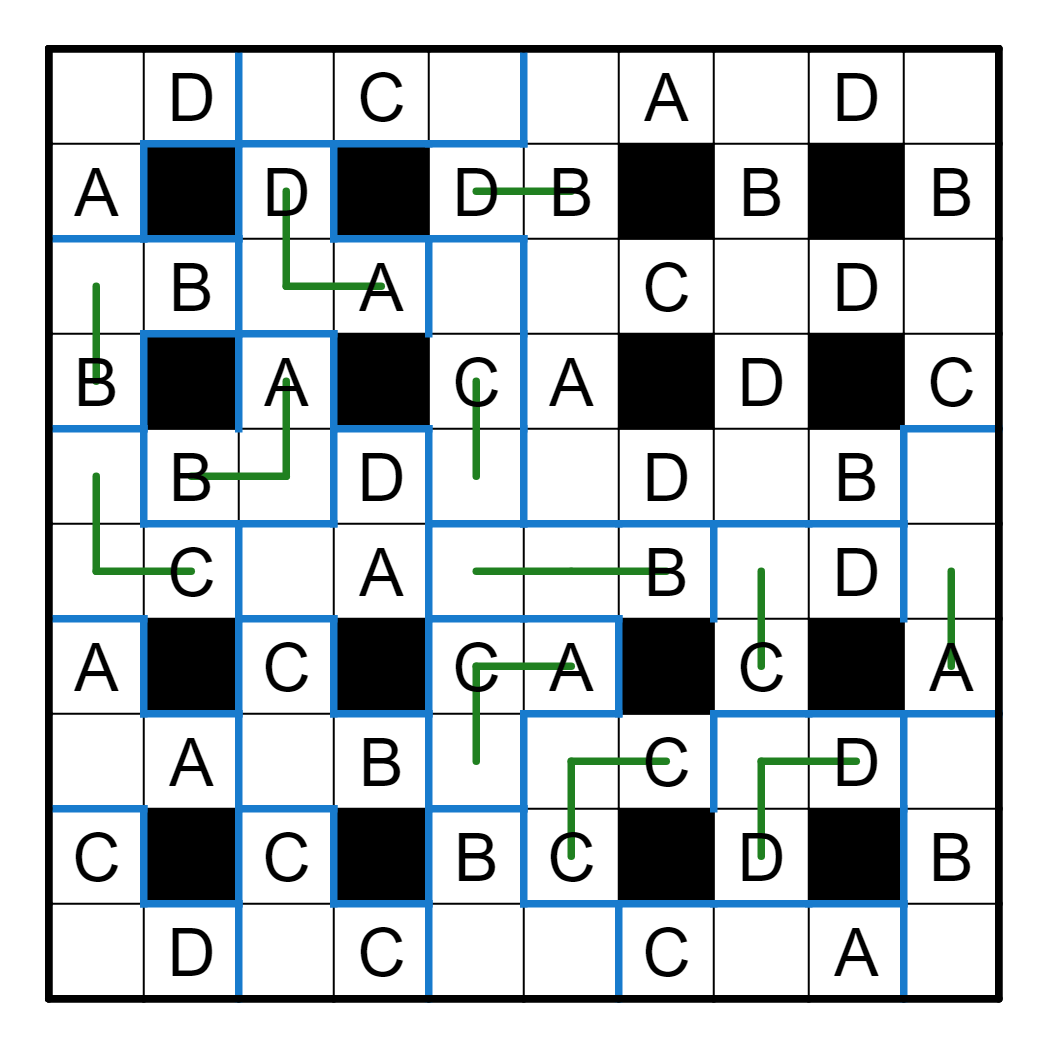 Following that, if the B in R5C9 were to join up with D in R5C7, then we run into a contradiction because there would be two groups with "CD" in them sharing an edge, like so: 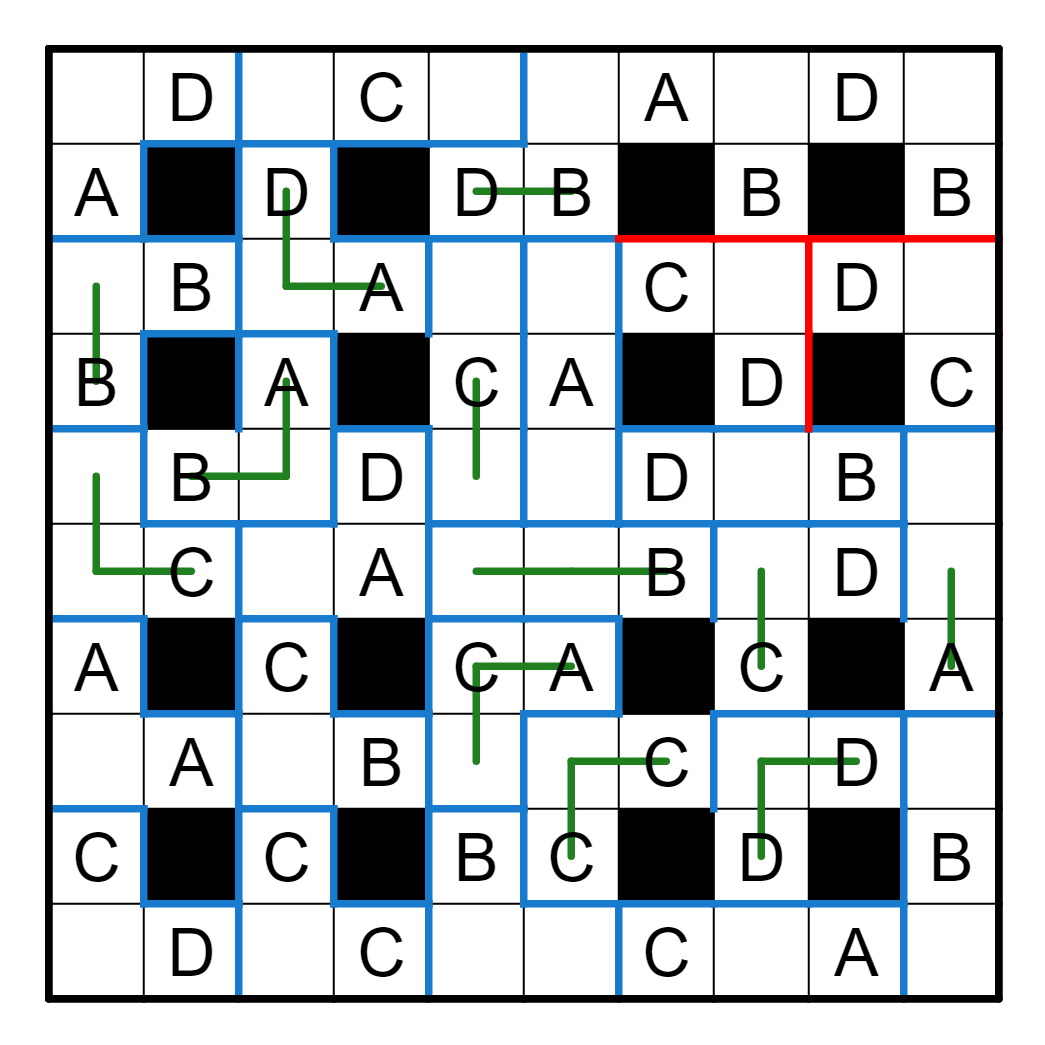 Therefore, the B must instead join up with the D in R4C8. From there, the D in R5C7 is forced to link up with the A in R4C6. The cell in R3C6 must belong to the "DB" group as the C in R3C7 cannot touch it. From the knock-on deductions, we can finish the grid: 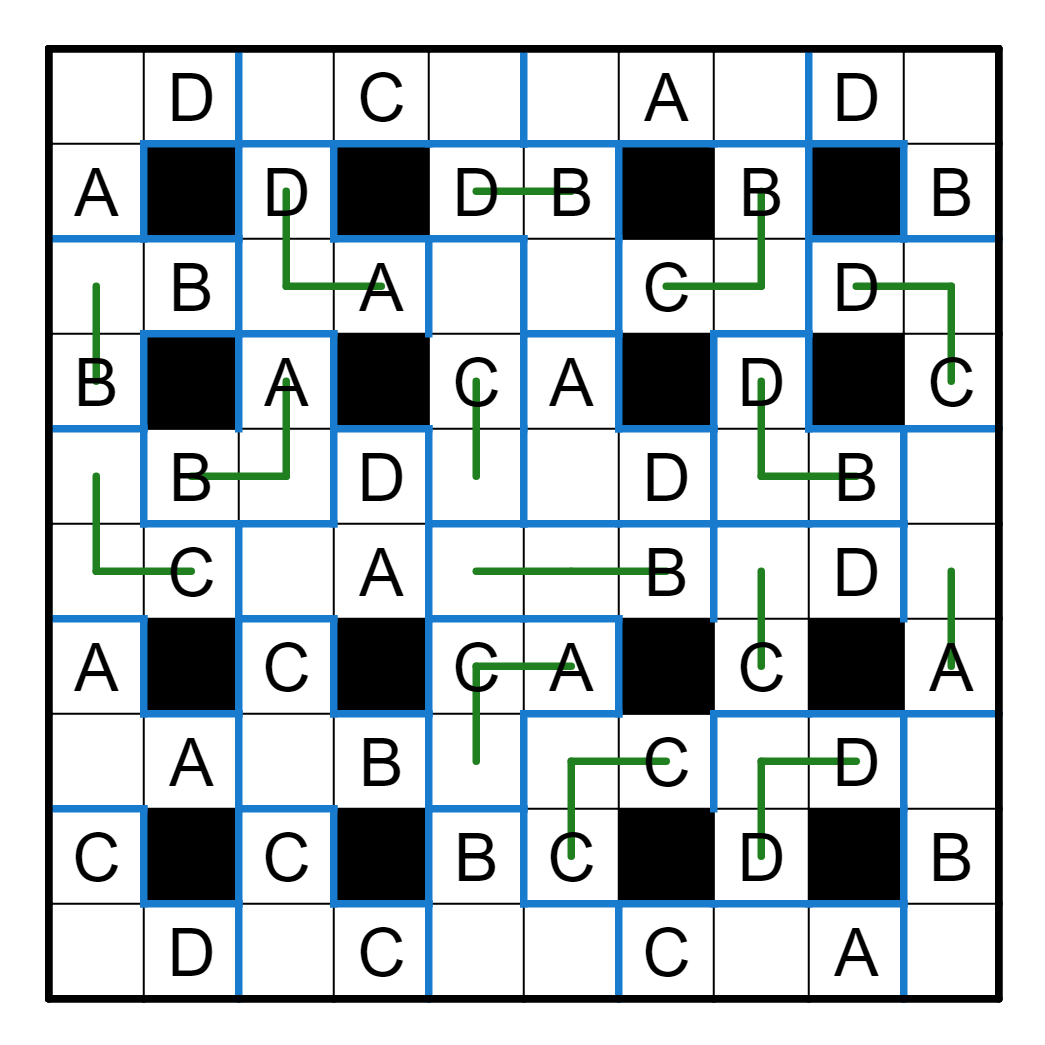