This puzzle type is inspired by Kakuro, and it has similar rules.

Unless someone with a better grasp of the Japanese language has serious objections, I would like to call this puzzle 'Hokuro'.

Hokuro is a grid deduction puzzle with the following rules: 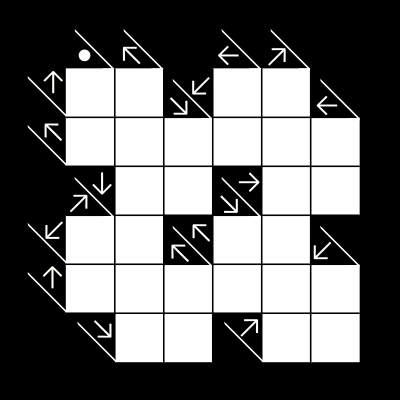 The key realisation here is that these cells cannot contain

a) any of the cardinal direction arrows, because even if one of the black cells can be satisfied, the other one cannot be. (Essentially, intercardinal arrows pointing in opposite directions do not share cardinal components)

Based on these two points, we can fill every such intersection with a dot and the remaining cell with the intercardinal direction of that row or column. 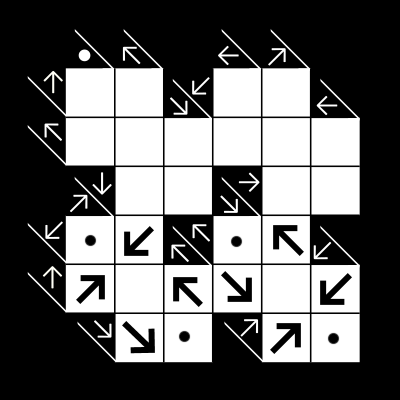 Now, look at column 2. The final direction of the black cell of that column should be NW, but it already has a SE and SW direction. This means that the remaining 4 arrows must be NW, NE, N and W in some order.

Now, row 3 cannot have an arrow that is pointing in the northern direction (otherwise, you will never get an arrow in the South direction just using two cells). Therefore, the West arrow must be in R3C2 and we can make some knock-on deductions there as well.

Row 5's current sum is currently a dot. Since its eventual sum needs to point North, the remaining components must be the N arrow and a dot. The N arrow is common to both column 2 and row 5, so it must go in that intersection. 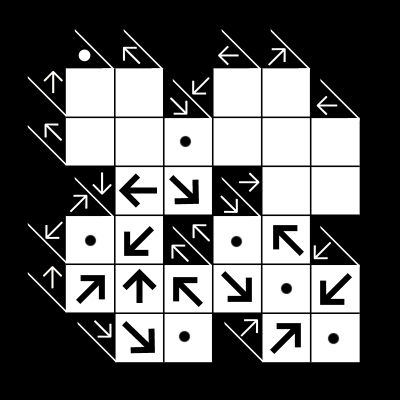 Now, look at the cells in R12C45. The SW black cell that faces two white cells horizontally can only be satisfied in two ways. Either it is W-Arrow + S-Arrow or it is a SW-arrow + dot. The other thing to notice the current sum in column 5. That column needs a final NE-Arrow, but its current sum is 2 * N-Arrow.

Now, if R1C45 must be SW-Arrow + dot, we must place the dot in R1C4 and not R1C5, since there is already a dot in R5C5. However, we now run into a contradiction: Adding SW + 2 * N-Arrows gives result of NW and there is no way to achieve the final result of NE with the remaining arrows. 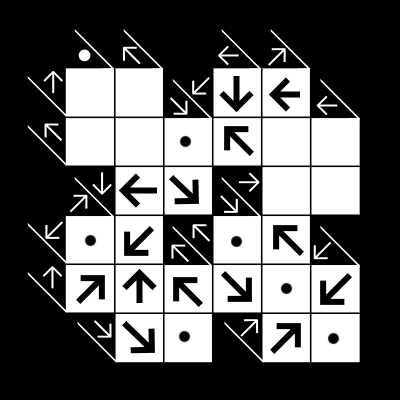 On the upper left side of the grid, we can make some observations. R12C2 must be the NE-Arrow and NW-Arrow in some order. However, since there is already a NW Arrow in row 2, then R2C2 must be NE-Arrow. 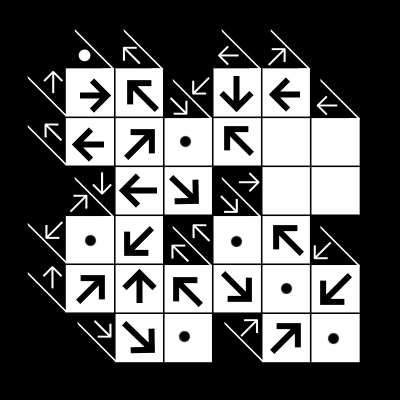 This finishes the grid: 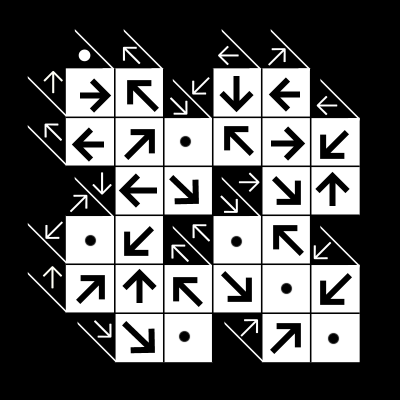