A tribute to "Most ways to uncheck the king"

Today, we had the great privilege to see @Paul Panzer's answer being ticked at @thesilican's absorbing puzzle.

I here propose a variant of his puzzle where it's not mandatory to use a legal chess game.

Provide a checkerboard with as many chess pieces you want where:

In the following non legal chess game because there is an extra black Queen as well as there is no white King, you can uncheck Blacks with 12 different moves, moving a black Queen to e2, e3 and e4 or by moving the King. 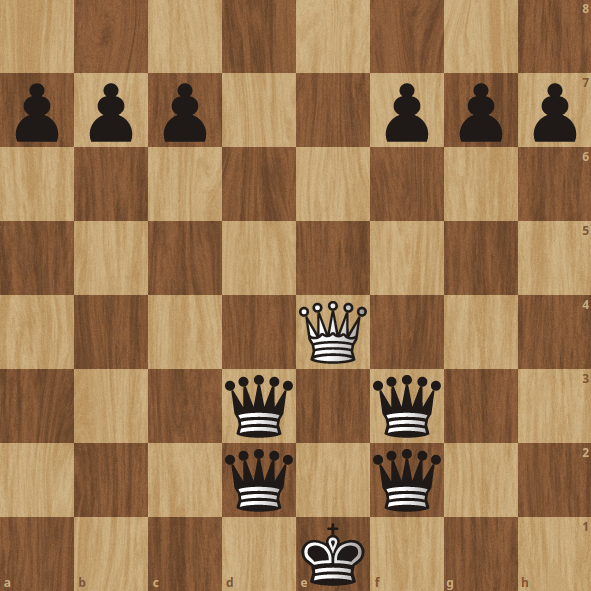 It is possible to do 42 thanks to Paul Panzer's answer but how much can you get with non legal games?

fill the a and e column with knights, the b and d column with queens. Then place a white rook on c1, the king on c8, and replace b2 and d2 with pawns, for "Pauls extended solution" 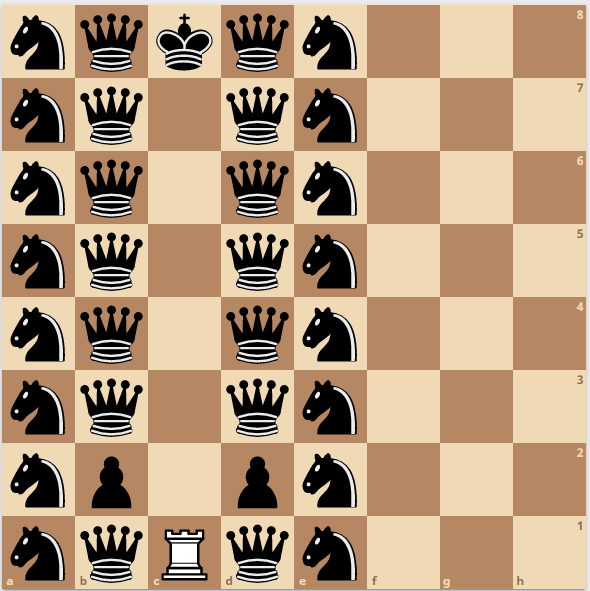 There should be a single white piece. We need to put the king in check (requiring a white piece) but we want to make it as easy as possible to get back out again (so any other white pieces are either superfluous or actively detrimental).

We're trying to maximize how many ways there are to break the check. That means moving the king, getting between the king and the offending piece, or eliminating the offending piece. A trivial consideration will determine that the white piece should not be a knight or a pawn, as they don't allow the range necessary for truly large numbers of blocks.

There's no reason to include any black pieces other than knights, queens, and the one king. We're trying to maximize the number of black options, and all other pieces have strictly fewer options than a queen.

The king's ability to move can be safely ignored. Any space that he might move to other than directly away from the threat could instead be filled by a unit that would have at least one blocking move, and directly way from the threat will not save him anyway.

Further, the king and the threat should be as far away from one another as possible, as this maximizes the number of squares that one could interrupt

Having the attack be a straight rather than a diagonal is preferred. Both allow the same number of squares to interrupt (either by blocking or by killing the target) but the straight allows more pieces on either side of both the king and the threat.

The existing modification of the original answer seems quite solid. So I thought I would give it a go with

a check via bishop move

The best I could get for this was: 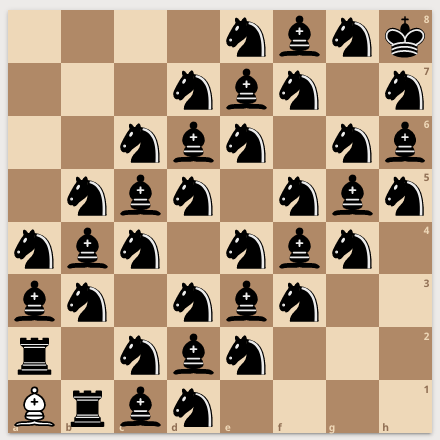 The breakdown by piece is:
38 by knight, 12 by bishop and 4 by rook
Try it online

User wimi pointed out an improvement 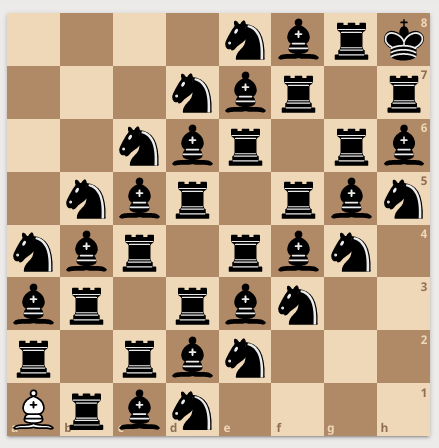 Not the answer you're looking for? Browse other questions tagged chess optimization checkerboard construction or ask your own question.

18
Most ways to uncheck the king