Consider this Martin Gardner/Raymond Smullyan puzzle just asked by Favst over on Chess.SE (Source: The Colossal Book of Puzzles and Games, problem A.12 "Doubled Knights"):

... Assume that a game is played with the new rule that a knight can on a single turn move twice. [I.e., both players' both knights are replaced by fairy pieces that move like knights but after their first knight-move may optionally make a second knight-move; either or both of those knight-moves may be capturing.] The first player, White, [is confident that he'll be able to win].

"Actually, I think I have a slight advantage," says Black, "so just to even the playing field, I'll play without my king pawn."

"In fact," says Black, "I'll even play without my king and queen pawns!"

Finally, an open problem: Is there any set of pawns/pieces that Black can give up, to escape the easy mate by White? (Define "escape" as "Black gets to make at least 4 moves.")

Note that positioned like that the two knights cover all but 6 squares in black's half. 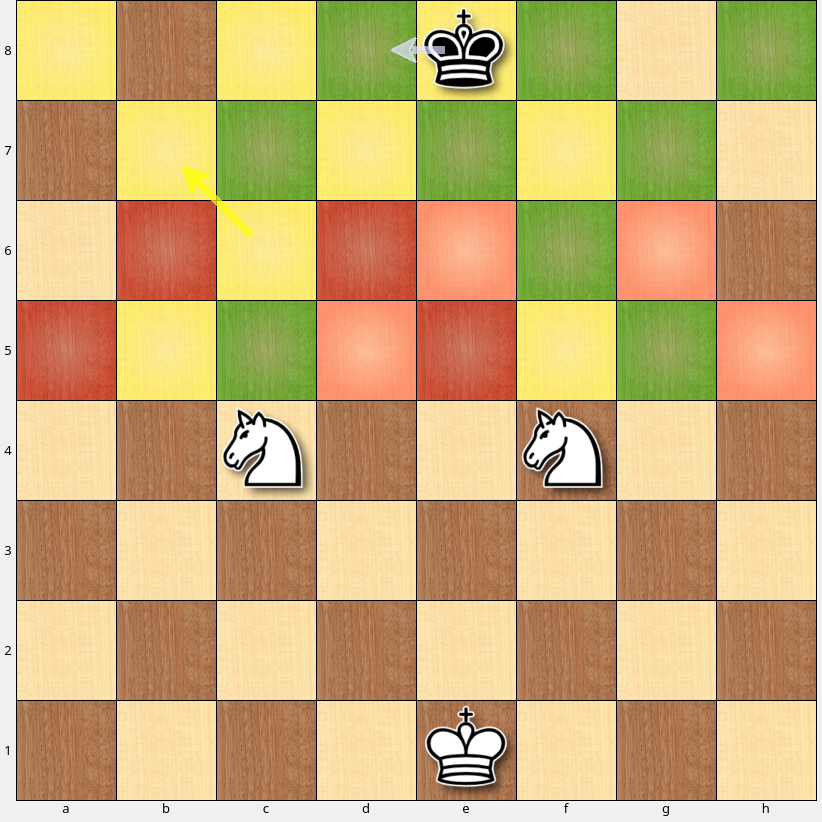 To avoid this being check mate black would have to

open up g8 i.e. sacrifice at least one super knight. But this makes e4 available to white:

So white wins in max

"Actually, I think I have a slight advantage," says Black, "so just to even the playing field, I'll play without my king pawn."

I'm not sure about the other claims ...

With the BKP removed,

With the BQP removed as well,

I should confess that

this takes five moves for W to deliver mate; I suspect, especially given the parenthesis at the end of the question, that there is a more efficient way, but a mate is a mate.

The third question is obviously more difficult. I don't think I would trust my own analysis. I might write a little computer program to try to solve it...

3
Two knights jousting on a chessboard
6
The Knight Checker or Football Chess
3
A Fairy Warped Chess Maze
7
Halloween chess: Vampires and Zombies and Bats, oh my!
4
Fantastic Foxhole Failures
6
Freedom of many choices
11
A knight chased by three knights
9
A knight chased by four knights