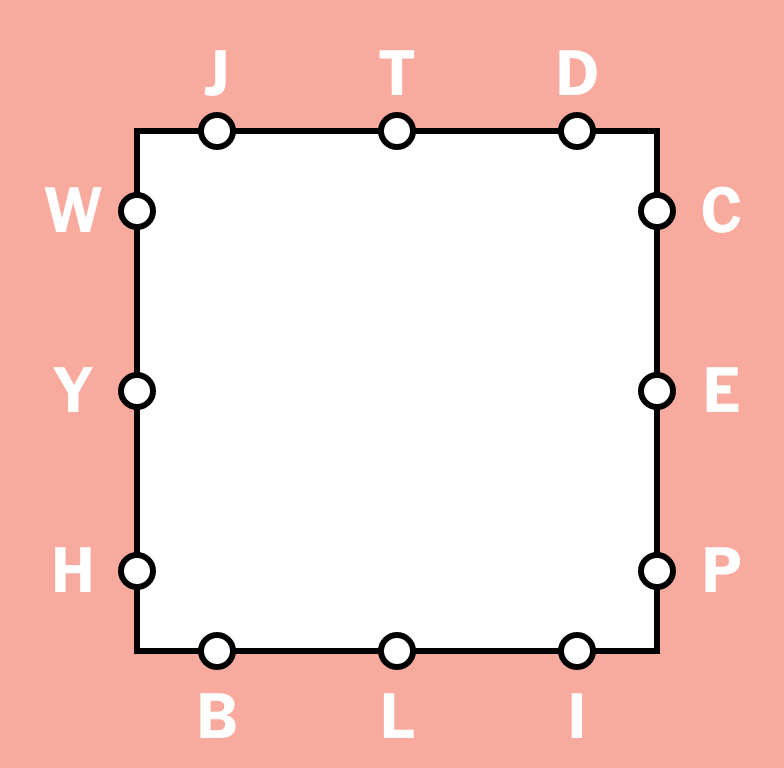 WARNING: I solved this puzzle and posted a solution below. I'm posting this more for muse.

Hello! I don't know if anyone's enjoyed this puzzle on The New York Times website, but I find it rather fun. The rules published on the site are as follows:

It's visually helpful to graph the words by connecting the dots from one side of the box to another to spell the words, so you can see where you are and where you can go. The challenge, therefore, is to solve using as few words as possible. The ideal solution (which likely never exists) would be one monster word, at least 12 letters long, that has at least one of each of the letters in the puzzle and that also satisfies the constraints listed above.

Not being a cheater but more of a computer science/math person, I was able to devise a list of candidate words for the puzzle above using the following method:

It got me thinking that an "extra challenge" puzzle would be to take those 159 candidate words above and sort them in an order such that most, if not all, words could be graphed in the puzzle. That is the part I haven't figured out yet. There are 54 words that end in the letter D, but only 19 words that start with that letter. Therefore, words that end in D would need to be rationed while maximizing other letters that have more balance beginning and ending.

Anyone have ideas how to achieve this mathematically?

Browse other questions tagged visual letters algorithm or ask your own question.

28
The most words that can be made by successively adding one letter to the original word?
1
Change a letter, add a letter
6
Dominoes With Letters
6
A Few Letter Equations
6
How many 5+ letter words can you find?
11
Yes, leaves turn different tones
16
Latter treed $\longrightarrow$ letter trade
41
Unusual letter combinations
7
What is the longest word contained in this new puzzle?
22
Density in Den Sitting