Elections in the United States of Alfagonia

Elections were held in the 45 electoral districts of the United States of Alfagonia. The Green Party won the election in 23 of the 45 districts. Alfagonia is made up of nine states of five districts, each of the states in the shape of a pentomino. According to the Constitution of Alfagonia, the winner of the election is not the party which wins the most districts, but the party which wins the most states.

Given that, based on the Constitution, this particular election was won by the Red Party, is it possible to determine the boundaries between the nine states of the Union? 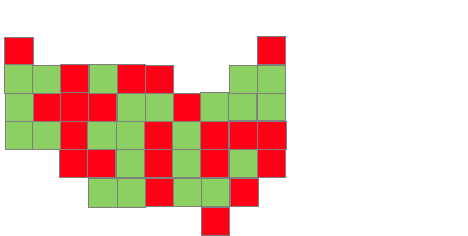 I think this can be achieved easily... I just greedily divide the states and this is one solution I got. 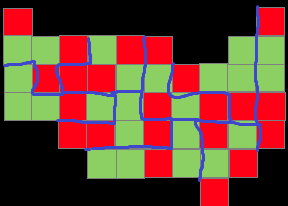 Not the answer you're looking for? Browse other questions tagged mathematics tiling polyomino or ask your own question.

3
Calculate a mystery number: Add the number of United States …
15
Ernie and the Artificial Emmental
8
Ernie and the Grand Tour
17
Single solved state for Sudoku Pyraminx
13
Near-fill with 3x1 long triominos, how to do a different void square than the center square?
5
A minor rearrangement of the one sided hexominoes in 12 simultaneous shapes
9
Tiling a rectangle with just the Y pentomino
5
The Pentomino Snake
22
Can you put L trominos to fill the figure?
20
Filling the plane with two colors