Each of the 40 clues listed below (a mix of pop culture and science/nature) yields the name of an animal. Your task is to solve the clues and enter their solutions into the accompanying grid in accordance with the following rules:

Note that once all clues are solved, their precise placement can be determined solely through logical deduction. A perfect answer would include: solutions to all clues, an explanation of the logical steps used to place the resulting animals correctly in the grid, and the name of the animal concealed within the grid. 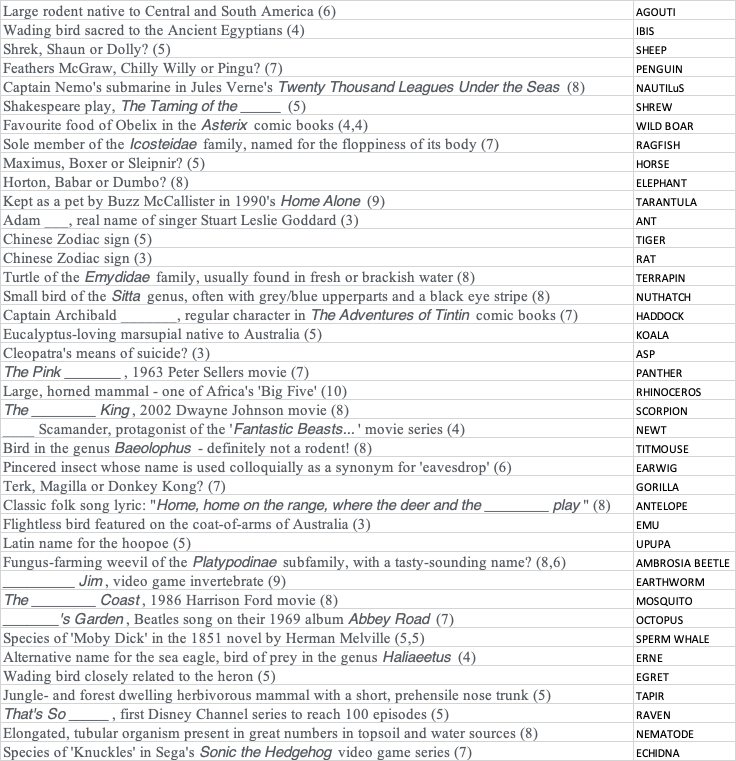 Favourite food of Obelix in the Asterix comic books (4,4)

Sole member of the Icosteidae family, named for the floppiness of its body (7)

Turtle of the Emydidae family, usually found in fresh or brackish water (8)

Small bird of the Sitta genus, often with grey/blue upperparts and a black eye stripe (8)

Bird in the genus Baeolophus - definitely not a rodent! (8)

Flightless bird featured on the coat-of-arms of Australia (3)

Latin name for the hoopoe (5)

Alternative name for the sea eagle, bird of prey in the genus Haliaeetus (4)

I don't really have a great answer to this. I started with the smaller ones (asp, ibis, rat), as well as putting the starting letters in each box. Then I tried to fill in blanks as I solved them.

Shading through the words and picking out the overlapped letters yields: RAISETHESEUP.

Credit to @Arturo (answer here). 'Raise' is meant to raise the overlapped sections - as if coming out of one's monitor. Doing this and grouping them into 5x3 sections yields the Braille spelling of SNAKE, the hidden animal. SNAKE makes sense because of the slithery way the crossword is filled.

if one "raises" the intersection squares and reads them as Braille

they form the answer:

SNAKE, which, considering the Ouroboros-like nature of the puzzle, fits perfectly.

(New account, but I've been a lurker for months in the PSE. Solved the grid independently but from this computer it's hard to share a photo with the final solution).

This answer is meant to supplement PartyHatPanda's and Arturo's answers as it only focuses on the logical deduction of the grid (as requested by the OP in the question's comments). For the actual answer, refer to those contributions instead.

Fill in the numbered cells with the respective initial letters.

Next, check for numbered cells that are the minimum length away from the next numbered cell (and therefore can only be fitted in one way) or that are near cells that only they can reach. These are:

ASP and ANT: These are only 1 cell away from the next numbered cell, so their middle letter can be immediately placed.

RAT: This requires a bit of thinking, but it is easy to see that RAT must go right from the 14-numbered cell and then down. If it goes down first, then 15 (TERRAPIN) must be placed upwards and round to the left, leaving the cell left of 17 (R1C19) empty, which breaks the puzzle.

TAPIR and SHEEP: There are 3 cells between this numbered cell and the next for both of them, so those must be the only slots for them.

SHREW: 6 (SHREW) must go right, before going up to join with 7 (WILD BOAR) and there is only one way to do this.

HADDOCK: It must use the cells in the upper right corner of the grid. The only other number that can use those cells is 18 and since KOALA is only 5 letters, it does not have enough length to go upwards and then back down.

EARWIG: It must use the cells in the last column in the bottom right area.

AGOUTI and IBIS: The cells in the upper left corner must be used by AGOUTI. 36 (EGRET) must go the other way and 2 (IBIS) is too short. Once filled, it forces 2 (IBIS) to use the cells to its left (since no other number cells can use those)

PENGUIN: The bottom left cells must be used by PENGUIN. It cannot be used by 32 (MOSQUITO) as it doesn't have enough letters to go around to 33 (OCTOPUS)

RAVEN: After filling in TAPIR, 38 (RAVEN) can only connect with 39 (NEMATODE) in one way.

NEMATODE: 39 (NEMATODE) must cross TAPIR in some way and connect with 40 (ECHIDNA). This can only be through the intersection at 'A'. After that, NEMATODE must not block 40's path to 1, so the word must turn right after T.

ECHIDNA: To connect with 1, ECHIDNA must turn downwards at some point since the word is too long to connect directly. If it were to go left twice, then the cell in R2C6 will be unused. Therefore, it must go left and then down and after that, there is only one way to connect to 1 (AGOUTI).

SCORPION: Note that the cell right of 23 and below 20 cannot be used by 20 (PANTHER) since it needs to go upwards. So, it must be used by 23 (SCORPION). Filling in the letters from N in the reverse order, we find that there is only one way to connect with SCORPION making use of any unused cells and not blocking off 26 (GORILLA).

GORILLA: After filling SCORPION, 26 (GORILLA) has only one way to connect with 27 (ANTELOPE).

UPUPA: After 27 (ANTELOPE) is filled, 29 (UPUPA) must connect to 30 (AMBROSIA BEETLE) via the P letter intersection and there is only one way to do this without blocking off 30.

WILD BOAR: 7 (WILD BOAR) must intersect at 'I' in TAPIR and can only connect with 8 (RAGFISH) in one way.

NEWT: After filling in RHINOCEROS, 23 (NEWT) must use the cell immediately to its left to connect to 24 (TITMOUSE).

PANTHER and TITMOUSE: 20 (PANTHER) must use the cell immediately to its left and snake upwards. TITMOUSE must somehow go right and then down to connect to 25 (EARWIG). There is bound to be an intersection point between these two and it has to be 'T'. Based on this, we can fill in both of these animals.

TIGER and TERRAPIN: TIGER and TERRAPIN must intersect somewhere and this can only be at 'E'. Based on this, we can fill in 13 TIGER using the cells to its right before going upwards. 15 (TERRAPIN) must use the cell R3C14 to connect to NUTHATCH as no other word can use this cell. This forces only one orientation for TERRAPIN (it needs to snake up and down).

NUTHATCH: 16 (NUTHATCH) can be filled in as there is now only one way left to connect to 17 (HADDOCK).

RAGFISH and HORSE: Once NUTHATCH is filled, we can make some deductions about the cells in R1C12 and R1C13. Those cannot be filled by 9 (HORSE), so they must be filled by 8 (RAGFISH). This means RAGFISH cannot use the A in R2C11, as it would then not be able to connect to 9 (HORSE). Therefore, it must snake towards the right using both R1C12 and R1C13 before going down. After that, the unused cells in R3C11 and R4C11 must be used by HORSE as it connects to 10 (ELEPHANT) making use of the intersection at 'S'.

This next step requires us to fill in some part of 10 (ELEPHANT), 11 (TARANTULA) and 20 (AMBROSIA BEETLE) before making the next deductions. Simply making sure to use squares only reachable by these words, we get to:

ELEPHANT: Now, we can see that 10 (ELEPHANT) must use the cell on top of 11 to reach 11 (TARANTULA). Otherwise, it will get blocked off from TARANTULA.

EARTHWORM: 31 (EARTHWORM) must use the cell R8C9 as it is the only one near to it. The cells in R9, C6-7 must also be used by EARTHWORM. MOSQUITO cannot use those cells as it will then be forced to intersect with EARTHWORM to go to 33 (OCTOPUS). This means the intersection point must be at 'O' but this is impossible to achieve.

Then, an intermediate step by partially filling in some animals:

34 (SPERM WHALE) must use the cells in R5-7, C1. The intersection points must be at 'E' in R7C2 and at 'H' in R5C2. So, we can fill in SPERM WHALE by circling it around and stopping at A. (At this point, it is unclear where L goes). Next, we extend 33 (OCTOPUS) and 5 (NAUTILUS) as far as possible, making use of cells that only they can reach. This gives us:

NAUTILUS and OCTOPUS: Now, if 5 (NAUTILUS) were to make use of the intersection at 'U', then it has three empty squares to its right, but only two remaining letters to use (T and I). This means that NAUTILUS does not intersect OCTOPUS at U and instead snakes away to the right. This means the P of OCTOPUS must go into R5C4.

ERNE and EGRET: Now, it becomes clear that these two words must intersect and this can only be at 'R'. Keeping in mind that words must go straight after an intersection, there is only one possible orientation.

With that, the grid is completed.