Found a quiz in an old dialogue of mine. First to guess all five gets the tick. 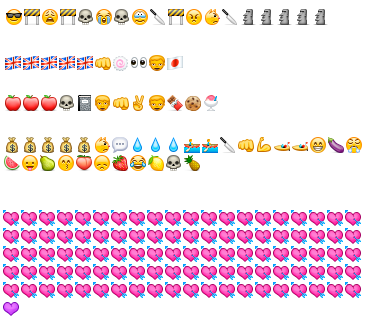 Here are my guesses:

1. Shingeki no Kyojin (Attack on Titan)

Explanation:
- The black and yellow striped barrier emojis represent the walls.
- The crying character in the middle represents Eren Yeager, crying over the death of his mother by a Titan. This results in Eren intensely hating the Titans.
- The stone-faced men at the end represent the Titans.

Explanation:
- The flags of Great Britain represent the Holy Britannian Empire, which invades Japan (as seen by the flag at the end).
- The fist, spiral, and eyes emojis seem to represent Lelouch Vi Britannia. The fist represents Lelouch fighting against the Britannian Empire. The spiral and eyes are a reference to his power, allowing him to control and manipulate others.
- The character next to the Flag of Japan is Kururugi Suzaku, the other protagonist of the series.

Explanation:
- The apples and skull emoji represent Ryuk, a Death God who loves apples.
- The book represents the Death Note.
- The two characters next to the fist and scissors are Light Yagami and L, the two main characters who engage in a battle of wits over the course of the anime.
- The chocolate, cookie, and ice-cream is a reference to the fact that L loves sweet stuff.

Explanation:
- Bags of Gold next to a Cat emoji seem to refer to Nami, who loves gold and is referred to as a "Cat Burglar" in the series
- Water droplets and ships emojis represent rain and ships, which are common in the world of One Piece.
- The fist, muscle, and 2 yellow rocket-like emoji next to the smiling character seem to represent Luffy, who has the ability to elongate his arm due to the Rubber-Rubber Fruit. The smiling character also fits Luffy because of his happy-go-lucky nature.
- The fruits seem to be a reference to the Devil Fruits, capable of granting super-human powers to whoever consumes them.
- The other faces seem to be a reference to the Straw Hat Pirates. The skull especially seems to be a reference to Brook, who is a skeleton.

Explanation:
- The 99 pink hearts (as corrected by OP) represent the 99 corrupted souls that the main character, Maka Albarn has already collected in the first episode. The purple heart represents the soul of a witch, which is needed by Maka to turn her weapon into a Death Scythe.

Not the answer you're looking for? Browse other questions tagged emoji anime or ask your own question.