This is the ninth Chain Puzzle in the Tabletop Games series, in which all puzzles are themed around board games, card games, tile games, and the like. The answer to this puzzle is a thematic word or phrase. The solver whose answer is awarded the green checkmark has first refusal on the opportunity to create the next puzzle in the series, which must somehow incorporate the answer to this puzzle somewhere within its construction. The solver is under no obligation to create the next puzzle - in the event that the solver does not wish to take up this opportunity, the puzzle's setter may take up the offer of a willing substitute setter (which is the case here, I'm taking over for @Bubbler) or choose to continue the chain themselves.

The answer to the previous puzzle (which provided the theme for this one) was SCENE IT?.

The call all PSE police dread live for had just come in: a crime scene with a puzzle left behind. I hurried to… a movie theatre?

I examined the room in question. A sign hung above the door: “DANGER! DANGER! YOU ARE ENTERING AN ACTIVE CRIME SCENE”

The criminal had set up a pinboard with 12 notes stuck on it. 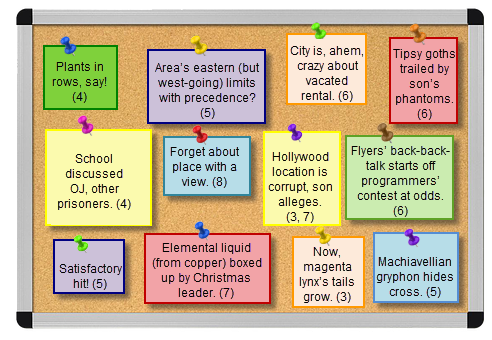 A piece of paper laid on a nearby table:

There’s a “Take Three” card in Scene It?, where you get three clues and have to identify the movie, actor, or actress. Except who cares about the people who play the characters? Bah! All of the clues here hint towards movies.

But I wouldn’t make it that easy for you. None of the clues give you any part of the movie title, and none of them give a character name. You do get one bit of help - each movie has an important setting as one of its clues.

Onwards to the clues themselves. They’re cryptic clues, obviously. And they’re all mixed up. You'll have to split them into four groups of three, where each group will clue a movie.

Okay, I lied. One last hint: disregard the “The” that starts each movie title. Once you have all the movies, you should figure out the game I want you to play. Other than my little cryptic fun here. Well, ta-ta ‘till next time!

So, what game does “The” CC want me to play?

Many thanks to @Deusovi for helping me with the cryptics - any remaining problems can be blamed on me alone.

1 Solved by Stiv in the comments.

Figuring out the final answer:

Omitting initial "the", the first letters of the films anagram to RISK.

As per OP, the answer is also hinted by

The note saying "DANGER", a synonym for "risk".

Not the answer you're looking for? Browse other questions tagged cryptic-clues anagram movies board-games connect-wall or ask your own question.