Four Cells is an area dividing puzzle. You may see an introduction to this puzzle here: Four Cells: An Introduction

An example is shown in the link above if further clarification is needed.

Shown below is the actual puzzle to solve: 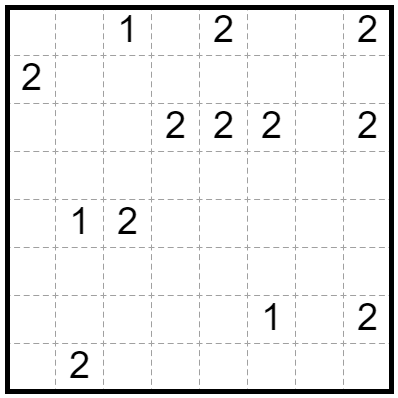 P.S. You may be wondering, "What's the big deal about not having any 3s?" Nothing. I just needed something for the title.

The 1 at the top is already fulfilled, and we can make progress with the two 2’s, also at the top. 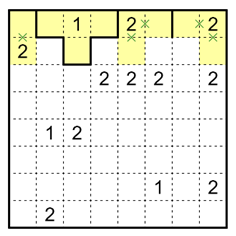 If the lower end of the top right 2 goes down, it would make the 2 below it have three borders instead of just two. Therefore, the top right 2 must form a square instead. 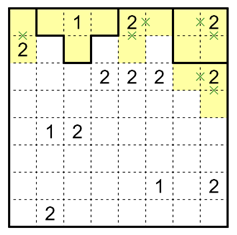 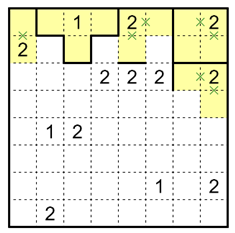 The Middle Left and the Two Down Under

Let us also turn our attention to the 1 in the middle left. If its border were anywhere other than to its right, the 2 would always be forced to have three borders. Therefore, the border of the 1 must be to its right. 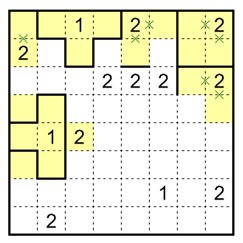 The square to the top left of the same 1 must be obtained by the 2 in the top left; otherwise, it will belong to a region that does not have exactly four squares. And there will only be one way that this is fulfilled: 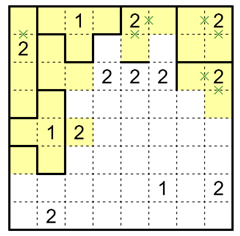 The square at Row 3 Column 3 cannot extend rightward, as it would force the 2 to its right to have three borders. Therefore it must extend downward. 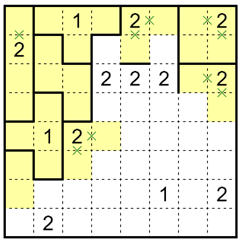 Note than the 2 at the bottom must extend fully horizontally. Otherwise, either a group of less than four cells would be trapped, or the 2 would obtain three borders. 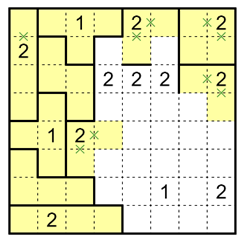 The Bottom Right, and Finishing Off the Twos

Now the unsolved 1 is limited as to how it can extend: two configurations of the area where the 1 will be yield a square trapped to the bottom left of the 1. Therefore, we are sure that the 1 will extend upward and rightward. It also cannot include the 2 to its right, because of the same problem that arose in previous steps: the 2 will have three borders. 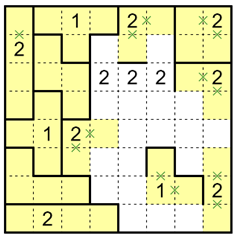 And quickly we see that the 1 must extend downward, or else it would trap a few squares below it. 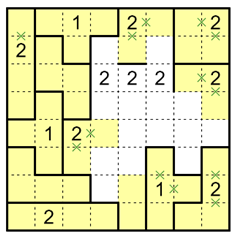 Here it took me a bit of time to figure out that the 2 at the top cannot form a square, or the 2 at Row 3 Column 4 would be forced into an area of six squares. 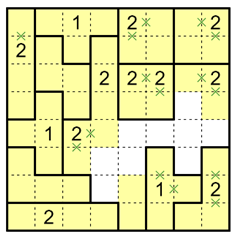 Therefore it must form an S-shape instead. 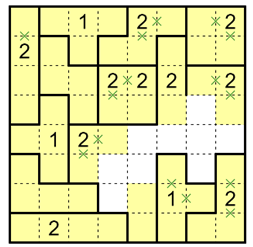 Finally, the 2 at Row 3 Column 6 cannot extend downward, or else it would trap seven squares to the right. Therefore, it must extend rightward. The puzzle is completed after this. 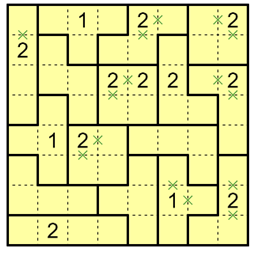