Update: I've just realized the image had a major flaw in it. I've added a new image and made sure it's correct. Nothing else has changed, only the image. Sorry for the inconvenience.

I have six words that all start with "a". Each word is specific to one of these six book series:

Each word occurs at least once in the canon of its respective series, but almost certainly never occurs in the canon of any of the other series. The words are not necessarily standard English.

This image encodes all six words. Can you figure out what they all are? 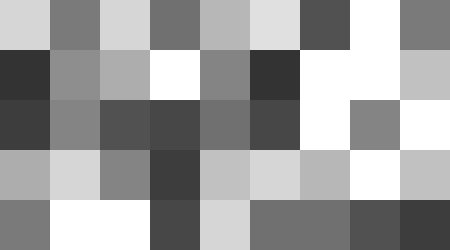 Each of the secret words relates to one of these six words (given in random order):
changer healer teller river maimer treasure

To verify your answer without asking me, put your six guessed words in the same order as their series are in above. Make them all lowercase and separate them with single spaces. e.g.

First, an analysis of the (updated) image:

The brightness values in the image are all multiples of 4. Dividing by 4 gives the following grid:

This contains the letters for many of the solutions suggested elsewhere, though in no obvious order. There are two u's, so animagus/anduin/asmodeus can't all be right. (The originally uploaded image had one fewer values–a 5 ('u')–though the ordering was different.)

Don't have the answer yet, but scraping clues (hopefully). Might be useful to others.

anapneo (hint: healer, healing spell in HP, not sure on this one) or albus (?)

alethiometer (hint: teller? Device to find 'dust' in the books)

asmodeus (hint: maimer, Asmodeus' maiming of Chickenhound makes him indirectly responsible for the events of Mattimeo.)

agra (hint: treasure, Agra treasure in "The Sign of the Four")

The Lord of the Rings

anduin (hint: river, Anduin is The Great River in LOTR)

I've no idea what to do with the image file (JoeZ will probably know, since it looks just like his profile pic!), but like MaRa I'll put some guesses as to what the final words could be.

No idea (haven't read it)

Lord of the Rings

Adding more information about the image and another approach:

Being all neutral greys, with no saturation, the hexadecimal values of the colors are all in the form of #ABABAB. Using only AB to create the grid we have:

with a decimal version:

which translated in ASCII is:

which is plain and clear nonsense. Still, there is no value repeated exactly six times and only one repeated more than six times which is FF, the white square. This, if some kind of decoding strategy has yet to be applied, must be the value for A (which also correspond to 25 in the answer posted by @Uri Zarfaty).

5
Can you find the killer?

2
The Six-Edged Sword
3
How to decrypt these words?
3
Some messed up words - Clue Six
8
Time Series Analysis
4
Complete the words
7
Riddle Number Six
2
A series of strange codes