The Case of the Poisoned Poet

I was in my office, trying to officiate a disagreement between Misters Jack Daniels and Jim Beam, when the dame walked in. She wore a slinky dress and glasses so dark all I could see in them was the reflection of my five o'clock shadow, which had arrived early. Dames were trouble--I'd rather solve the cases of five men than one dame, primarily because that would make me five times the money.

"Are you Alex Playne, Private Investigator?" she asked.

"That's what it says on the door," I said. "Can't you read? Or did the kids from down the hall steal the hinges again?"

While saying something, the woman whipped out a telescoping cane, as white as my teeth weren't. I felt terrible and heard worse. "What was that?" I asked.

"My name is Ella Villanelle," said the dame, feeling her way to the chair. "I think my father was murdered."

I offered her a cigarette for five seconds before I realized what the hell I was doing and put the cig back in my pocket. "Surely I can't be the first person you've gone to," I said.

"You're not, and don't call me Shirley," said Ella. "The police investigated, but think it was natural causes. No one believes me, Mr. Playne. I think you're my only hope."

The last time I heard something like that was in the movies, but I let it go. "Start from the beginning, Ms. Villanelle."

"What do you know about poetry?" she asked.

"I know that my seventh grade teacher said I had no talent for it."

"My father is Lyric Villanelle, Mr. Playne, and he's a world-famous poet. I live--lived with him. It was no secret that he was very rich and very generous. He considered his poet friends to be as important as his family. That's why I think someone killed him--" she gulped, "not all poets can be as wealthy as my father, and he left a healthy inheritance."

"Large amounts of money can be a reason for...anyone to kill, Ms. Villanelle," I said.

"I'm not inferring anything. You're the one inferring," I returned.

"Well, good, one of us ought to be doing something here." Ella continued. "The day my father died, he had a party. Food, drinks, all of that. I usually avoid the things. My father's friends are perfectly fine people, but I can only listen to new odes for so long.

"My father had over five of his poet friends: Louie Cinquain, Colin Limerick, Sandy Sonnet, Shiro Haiku, and Molly Ode."

"Alright, he gets a regular Starbucks full of wannabe poets, then what?" I asked.

"Nothing, really. I didn't hear any arguments, any fights, nothing but the normal party things. Then, all of a sudden, Molly screams and we found my father dead in his writing den. Heart attack, said the doctors."

"And you think he was murdered."

"Aren't there drugs, Mister Playne, that can simulate heart attacks? Look like natural causes, the kind in mystery stories, that--"

"Authors would know about," I finished. "Say I believe you," I said, "Do you have any proof your father was murdered?"

Ella looked a tragic combination of broken and unsure, then she reached into her handbag and gave me a folded piece of paper. "This was on his desk."

"It's a piece of paper," she responded, "But I can't help but think it's what's written on the paper that is important. I showed it to the police, but they just said it was 'nonsense' and gave it back to me. I think it's a message, but...I haven't had anyone read it to me. I can't trust my father's friends. Please, Mr. Playne."

I opened up the piece of paper, then turned it to one side. It was like a blank coin: I couldn't make heads or tails of it. 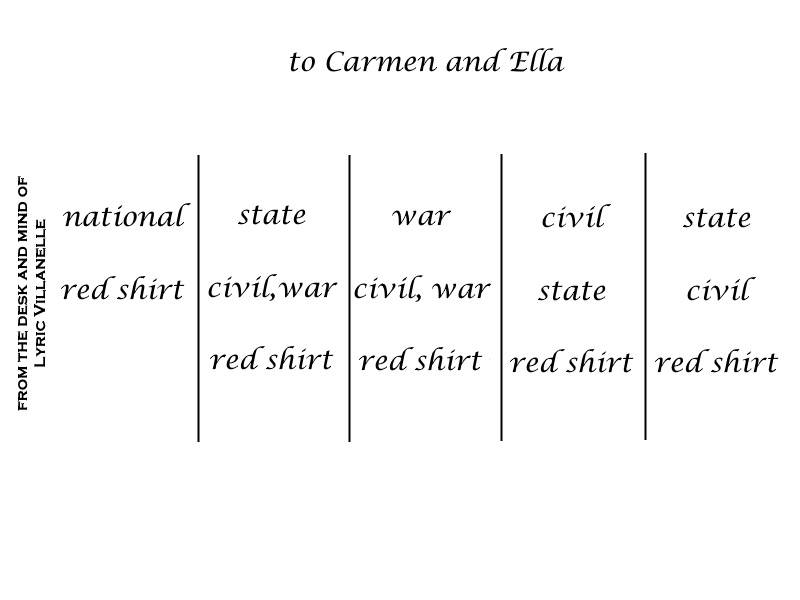 I read it to Ella, as best I could. She nodded sadly. "It just...sounds like one of my father's poems. The critics always loved his use of repetition..." She sighed, defeated. "Maybe it was just something he was working on."

"Hm? Oh, it's my twin sister. We...never got along with Carmen. She doesn't have a poetic bone in her body, I'm afraid. She works as an accountant, believe it or not, although her true love has always been flags, of all things. I can't imagine why he would dedicate it to the both of us, but..." Ella shook her head. "I'm sorry for wasting your time, Mr. Playne."

But the cogs in my mind were turning, shaking off the rust. "Say Lyric is poisoned," I muttered to myself, "and he figures it out, he's a writer too. He's figured out who did it and needs to tell someone--but he doesn't know who he can trust. And he can't just go upstairs and tell Ella, if the killer thinks she knows, they might kill her too. So he writes a code, one that looks just like one of his poems, one that only--"

I stopped muttering and pointed at Ella. "The good news is I know how to figure out the code, and that I didn't even have to know anything about poetry. The bad news is you're going to have to call your sister."

The poets' surnames, as said, have nothing to do with the solution: that's just me attempting to be clever.

I realized belatedly that the link between "redshirt" and the word it's in place of isn't as strong in general as it is in my head. It might be a little obscure.

Firstly, given the hint that the piece of paper was addressed to both Carmen and Ella, it seems like deciphering the message would require characteristics from both daughters. From the story, we know that Carmen's true love was flags while Ella was blind. This seems to hint that

Vexillological symbols and Braille letters must be used to decipher the code.

Looking at the Wikipedia page for Vexillological Symbols, there are six basic contexts of usage, which I have included below as an image (I couldn't find any unicode characters for the symbols, so I had to place it in an image):

Other symbols may be a combination of the six basic symbols. For example, the vexillological symbol for the national flag is obtained from combining the civil, state and war flags.

So, it seems we need to convert the words in the message to vexillological symbols before using Braille to get the final result.

Before doing that though,

it must be figured out what the "Red shirt" means as it does not appear to be a part of vexillological symbols. Thinking about it a little further, the most likely interpretation of "Red Shirt" seems to be ensign. I don't have a good explanation for why. Indeed, the only reference between Red Shirt and Ensign seems to come from Star Trek, which might not be relevant, but it matches OP's hint that it might be a little obscure.

Now, we know how to decipher the words in the message.

Replacing "red shirt" with ensign, we get

Therefore, the murderer is Louie Cinquain.

49
My Puzzling Girlfriend
9
Let's help Sherlock, shall we?
4
The Cryptology Case
14
How was the math test?
9
Helping the Heiress... again
0
The message is obvious, no need to decrypt it
6
Find the Girlfriend
11
Who poisoned the grandmaster?
14
A simple murder mystery puzzle that I came up with
9
Luncheon in the dungeon