How to solve this Loopy puzzle efficiently with little backtracking?

I would like to solve this Loopy (Cairo) puzzle: 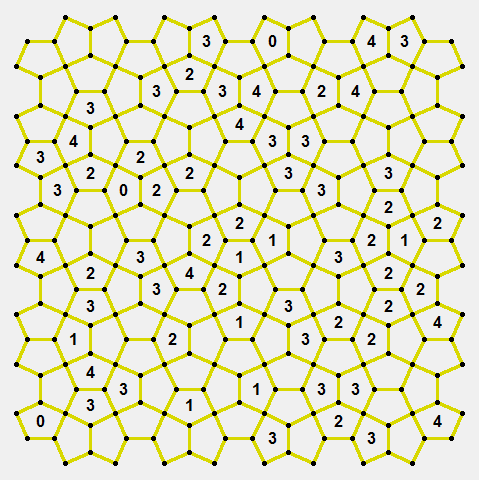 But I would like to do so with as little backtracking as possible. By this I mean that I want to have at most one pending guess at a time; I do not want to make any further guesses if I have already made one that has not yet been disproven. I believe it is possible using some local patterns, but either I have not found enough local patterns to assist me, or it is in actual fact harder to do so than to just guess more and do more backtracking. I did manage to solve this puzzle but it took me a long time to find suitable search paths that only had one pending guess at any time.

To put my question another way, what is the shortest purely logical solution you can come up with to find the solution to this puzzle and prove that it is unique?

Here is one point at which I could not proceed locally: 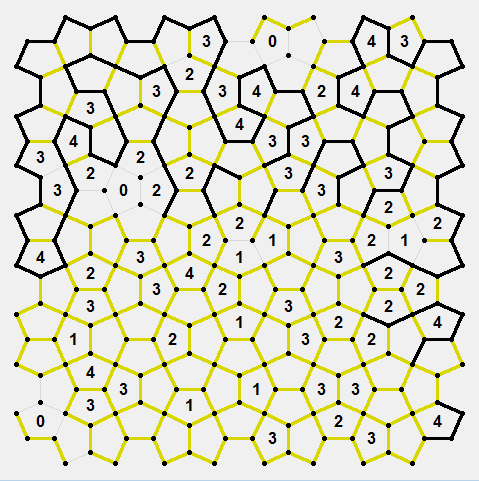 I then used 1-guess backtracking to obtain the following (i.e. in each of the 3 places removing those edges would lead to a contradiction): 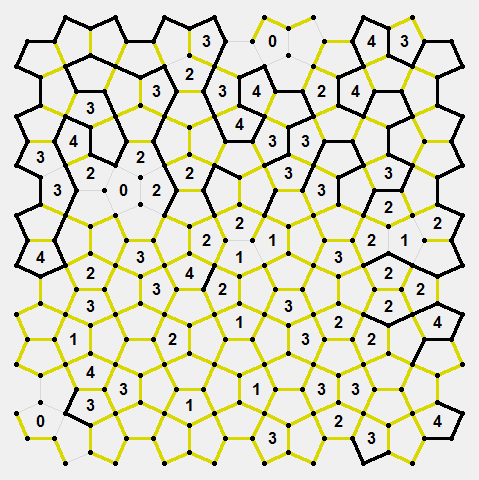 Okay, so I solved the whole puzzle :) I will use this specific puzzle to showcase several interesting deductions. Each picture will show one deduction I consider non-trivial, and in between pictures I will make trivial deductions. In this post, "trivial" deductions are:

Each deduction will have its area circled. Some also have arrows pointing to important lines. If you want to figure out the deductions by yourself, only click on the first spoiler of each pair to see where the deduction will be. In my explanations, a digit refers to a clue number, and a spelled-out number refers to a quantity.

Some terminology that I use here:

On to the deductions! 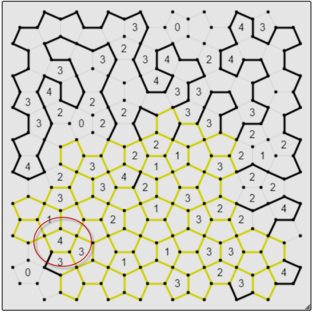 The 4 can only have 1 border unused. That border has to be one of those adjacent to the line coming in from the 3; if both of the adjacent borders are use that creates a fork in the loop. Therefore every border not adjacent to the 3's line must be used 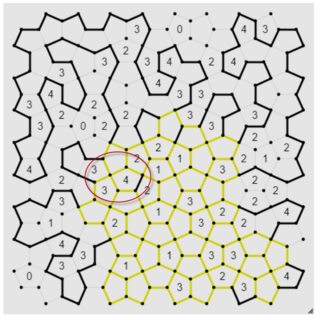 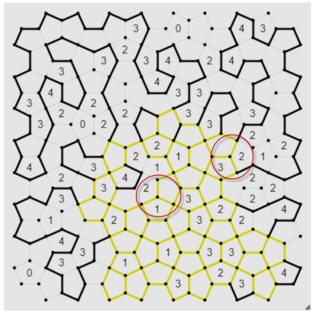 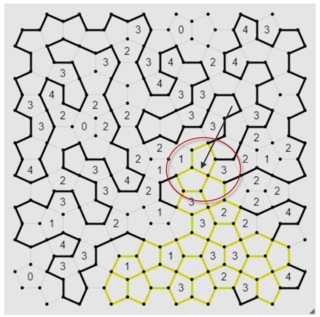 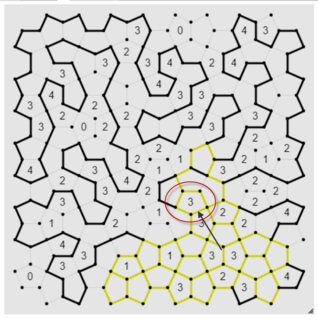 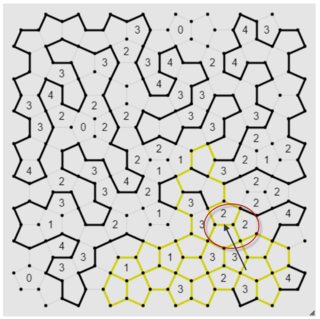 There are two lines leading in to the 2. Extending either will use up one of the 2's allotted sides. That's all the sides that can be used, so the line with an arrow pointing to it cannot be used. Given that that side is not used, the two borders for the neighboring 2 are now "naked" and must be used together. Except they can't be, since one side of that 2 is already used. So neither of those borders can be used. 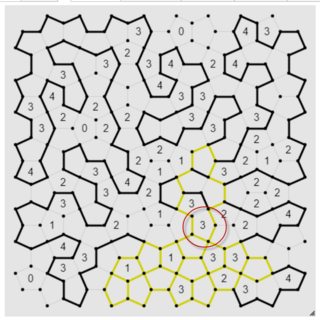 The circled 3 has two "naked" sides. If they aren't used, there are only two sides left, which is too few. Therefore the "naked" sides are used. 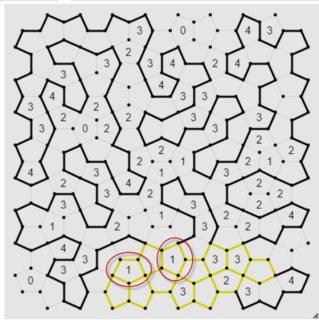 The left-side circled 1 has two "naked" sides. They can't be used, as two sides is too many for a 1 to use. The right-side circled 1 has a line leading into it. If any of the sides not adjacent to that line are used, then the line has nowhere to extend to. So all of the non-adjacent sides are unused. 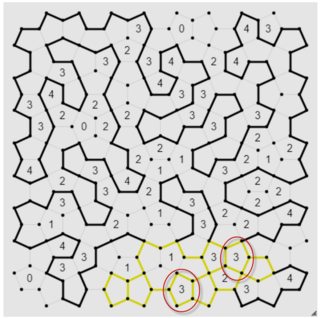 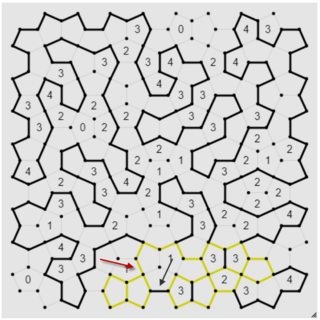 The line leading in to this bottom section (black arrow) must go up at some point to connect to the rest of the loop. To go up, the line that is being pointed to by the red arrow must be used.

For completion, the solution: 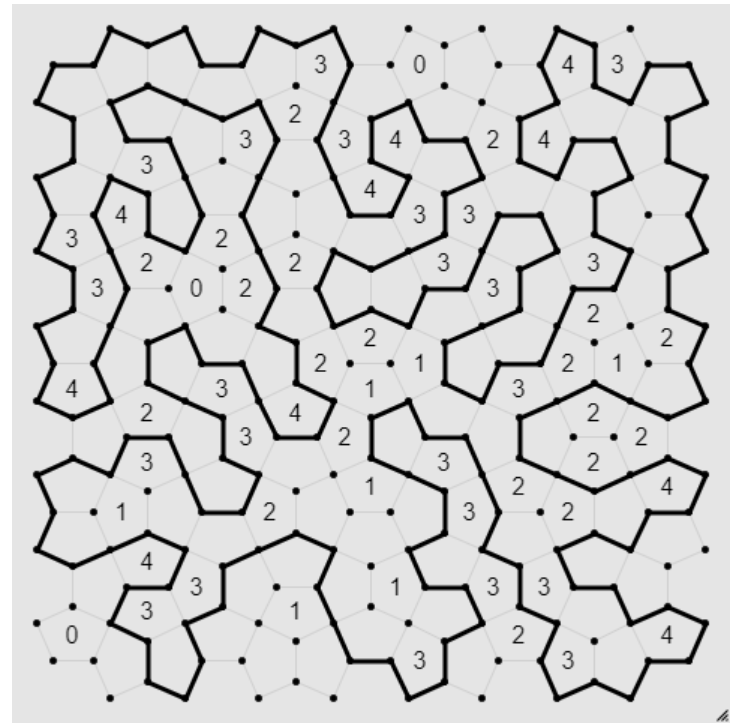 In response to comments:

It seems you were asking for a logical solve from your second picture, not your third picture. Below I present such a solve. This time I skip all trivial deductions, as well as deductions that I covered in the above pictures. 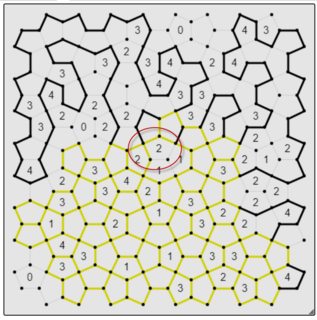 The deductions (two related ones)

The circled 2 has only three sides available, and a corner between two of those sides has a line leading into it. Only one border on either side of such a line can be used, so the one non-adjacent border must be used. Additionally, the leading-in side cannot bend away from the 2, as this would remove both of the 2's borders around that corner, so the below 2 cannot have its top side used 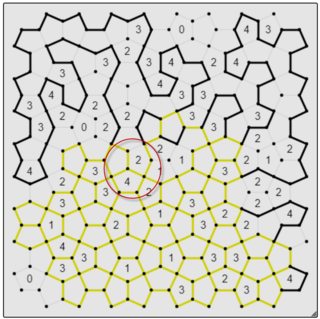 The 2 can use either its two "naked" sides together, or its other two sides. Either way, the 4 must use its bottom 3 sides. 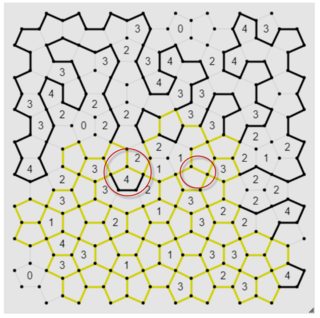 Both the 1 and the 4 have the same deduction, covered above: the "middle corner" must have a side leading out of it, for connectivity. This also means the non-"naked" sides of the 2 from the last deduction must be used, instead of the "naked" ones. 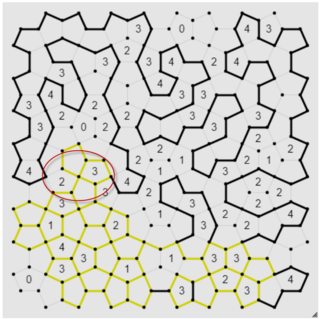 Neither the 2 nor the 3 can use their shared corner all by themselves. If the 2 did, then the 3 would be forced to make a fork, and if the 3 did, then the 2 would only have one side left to use. Therefore the 2 must use its one non-corner side and the 3 must use its two "naked" sides. 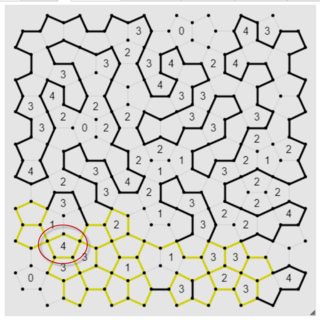 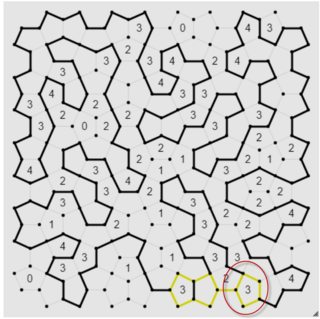 If the 2 uses its bottom side, then there are three ends in the circled area. Three ends cannot connect to each other for a loop. Therefore the 2 does not use its bottom side.

From there the solution is trivial.

If any of that is too confusing, feel free to ask for clarifications in the comments.

14
How does one go about creating a new grid-deduction puzzle?
14
The Terrible Twos of Slitherlink
2
Fixing a Binairo Mistake
3
Slitherlink failure - help needed
13
Rhombicosidodecahedron Slitherlink
2
How to solve this Number Grid?
11
Nurikabe-Slitherlink
39
This new puzzle type needs a name {EXTREME EDITION}
3
Lost in this Loopy puzzle